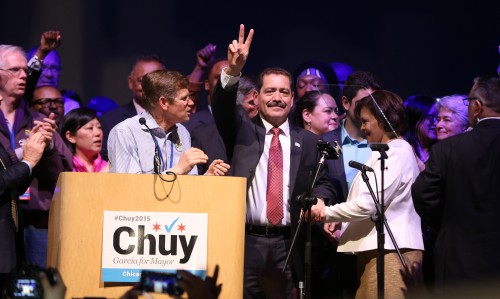 Shortly after 8 p.m. Tuesday night it was announced that Jesus “Chuy” Garcia had called incumbent Mayor Rahm Emanuel to concede in the first mayoral runoff in Chicago history.

“The people of Chicago made me who I am today,” Garcia said in a raspy voice over the loudly cheering crowd. “We didn’t lose today, we tried today.”

Garcia talked about the hottest issues of the campaign, including school closings, the pension and debt crisis and the number of people leaving the city for the suburbs.

“We may have fallen short of votes today, but we will make sure these people’s voices are heard,” Garcia said. “We gave a wonderful struggle for democracy in the city of Chicago. I’m so proud of all the support you have given my candidacy.”

Emanuel took the lead in the polls and the margin between the candidates was more than 11 percent an hour after the polls closed. Emanuel pulled 55 percent of the vote to Garcia’s 44 percent with 98 of the precincts reporting. There was a 38.59 percent turnout, meaning 556,394 of the total 1,441,637 registered Chicagoans voted.

A record number of voters cast votes before April 7 after a push by both candidates for early voting. More than 143,000 cast their vote before the official runoff date, considerably more than the 90,000 who voted early in February and the 76,000 in the 2011 election.

Live entertainment from young local artists filled the banquet hall at the University of Illinois Chicago Forum until just before 8 p.m. when a campaign staff member announced that Garcia had called Emanuel and conceded the competition.

Shock rippled through the crowd and a chorus of “no’s” and booing ensued. The live band continued playing and told the crowd to stand on their feet and celebrate the victory they had. The cause for celebration was challenging an incumbent mayor to a runoff.

Garcia took Emanuel to the first runoff in Chicago election history after garnering 34 percent of the vote in February. In recent debates Garcia said he would demolish the controversial red light program and put 1,000 more police officers on the streets.

Garcia, a Mexican native, would have been the first Mexican-American mayor of Chicago. He was the first Mexican-American member of the Illinois State Senate and served Chicago City Council in the 1980s. He served on the Cook County Board of Commissioners and identified as a strong ally to Cook County Board President Toni Preckwinkle and former Chicago Mayor Harold Washington.

“Although Garcia was never the probable candidate to oust Emanuel, he did manage to put up quite the challenge,” DePaul almunus Ramiro Hernandez said on Facebook after the results were posted.

“I don’t think anyone –least of all Mayor Emanuel– ever dreamed that a runoff was ever going to be a reality. In that regard, Garcia did well.”