Questionable coverage: Police brutality is only part of the problem 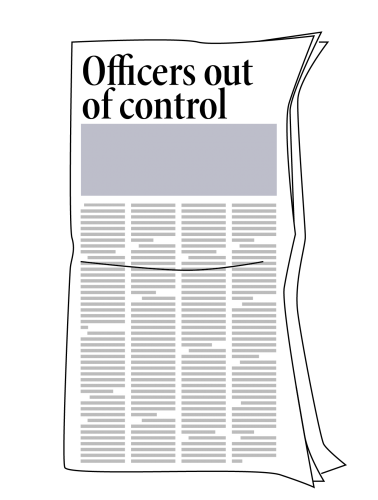 Police brutality has become a central piece of media coverage in the U.S. this year, and with the deaths of Eric Garner, Michael Brown, Tamir Rice, Eric Harris and Freddie Gray, it seems that police brutality is at an all time high.

In the case of Gray in Baltimore, a Baltimore grand jury handed down indictments against six police officers last week. While some say that justice is being served and that this is a step towards fighting police brutality, others say that this is not enough.

Is police brutality increasing? Or, is it just finally getting the coverage it deserves?

CNN reports that society is “seeing more mainstream media coverage of police violence” due to various reasons, one of them being the increase in citizen journalism, which has been made possible with cell phones and social media. Anyone can record a video and post it online where it will either sit in a virtual wasteland, doomed to never be seen again, or it will attract the attention of millions and grab national headlines.

Social media is shifting the agenda-setting roles of politicians and journalists to average citizens. Would the deaths of Brown or Gray have sparked as many national protests as they did had social media and citizen journalism not played a major part?

If a picture is worth a thousand words, a video is worth a million. As videos, such as a police officer putting a man in a chokehold or another officer denying a request for a medic, circulate in the virtual world they are transported into a reality that was not quite possible before.

CNN reports “black newspaper executives feel the videos lend credibility not only to black victims’ versions of events in specific situations, but also to their versions of events historically. Where a victim’s race could affect a story’s perceived veracity, video permits no such prejudice.” The videos are shedding light on a problem that has always been there, but has rarely been believed.

While police brutality is certainly an issue that needs to be addressed, this isn’t the inherent problem at hand in all of the recent cases in the past year. After examining Brown’s death in Ferguson and Gray’s death in Baltimore it’s clear that the looting, rioting and even peaceful protests are systemic of a deeper problem than police brutality.

Ferguson and Baltimore have serious inequality problems that were barely addressed by the media. After the economic recession of 2009, “the Ferguson and St. Louis region economies were on the upswing, (but) the gains weren’t equally shared,” Fortune Magazine reported. “The unemployment rate for African-Americans … was 26 percent in 2012, according to the Census Department’s latest available stats on employment and race in the area. For white Americans, the unemployment rate was just 6.2 percent.” Additionally, a white majority police force was patrolling an area that was largely African-American, creating intense racial tensions.

Ferguson was crippled by economic inequality and racial tensions, and while this inequality wasn’t the direct cause of the protests, it was certainly a factor that was not addressed as much as it should have been by the media.

The Baltimore protests also lacked serious contextual explanations. Michael Fletcher, a reporter for the Washington Post, has lived in Baltimore for over 30 years and called Baltimore “a combustible mix of poverty, crime and hopelessness, uncomfortably juxtaposed against rich history, friendly people, venerable institutions and pockets of old-money affluence.”

Fletcher specifically cites Gray’s neighborhood, Sandtown, as an especially poor area, stating, “more than half of the neighborhood’s households earned less than $25,000 a year, according to a 2011 Baltimore Health Department report, and more than one in five adults were out of work — double the citywide average.”

This is not to suggest that the situations in Baltimore and Ferguson were equal, but to draw attention to the fact that both cities suffer from issues that are deeper than police brutality. The media’s lack of coverage on the overall contextual situations in these cities portrays inaccurate representations of the situation at hand.

Police brutality has become the way many in the U.S. learn about problems in cities with intense inequality. Rather than the media playing its investigative role and identifying deeper reasons for social unrest and protests, the media has run with the police brutality news frame.

Taking the easy way out will have consequences that negatively affect our population as a whole. The American people believe police brutality is the issue at hand, when in reality these torn cities’ intense inequalities lead to conditions that lend itself to protests and violence.

The media has a responsibility to not only report facts, but to investigate and analyze events. Reporting on surface issues, such as police brutality, rather than the root cause of the problem will only perpetuate the cycle of police brutality protests in cities marked with social and economic unrest. The media is essential to the functioning of democracy, and their lack of investigation is eroding our system of government.

When the next round of protests arise, which is bound to happen due to a lack of thoughtful and accurate reporting and policies thus far, the media needs to recognize their duty to democracy and the American people and play their investigative, watchdog role.

The fourth estate needs to do what it can to prevent police brutality by identifying the roots of the problem rather than sit back and wait for the next death to highlight a city of inequality. The media needs to go beyond the “if it bleeds, it leads” mindset and play their role as thoughtful reporters and journalists.