‘Feel the Bern’: Why Bernie Sanders is the ideal candidate for millennials

In this July 6, 2015, photo, supporters of Democratic presidential candidate Sen. Bernie Sanders, I-Vt., cheer at a campaign rally in Portland, Maine. Sanders is packing 'em in: 10,000 people in Madison, Wisconsin. More than 2,500 in Council Bluffs, Iowa. Another 7,500 this week in Portland. The trick for the independent senator from Vermont is to turn all that excitement into something more than a summer fling.(AP Photo/Robert F. Bukaty)

Millennials are a highly coveted group among candidates in the 2016 presidential race. The generation is certainly an influential one, as 18- to 29-year-olds account for 23 percent of the U.S. population. The millennial generation could be instrumental in deciding the next leader of the free world if a majority actually votes in the upcoming election. But with a whopping 20 candidates already officially campaigning for high office, determining which contender’s platform most closely aligns with the main interests and concerns of Generation Y is no simple task. Surprisingly enough, the ideal candidate for the youngest American voters is the oldest contender in the race: 73-year-old Senator Bernie Sanders.

When Sanders announced his bid for the Democratic nomination, he was immediately dismissed by the media as being too far left for the presidency and a long shot against Hillary Clinton, a polished politician with almost 100 percent name recognition and $47.5 million already donated to her campaign. Compare that to Sanders: With bedraggled white hair and a think Brooklyn accent, the senator lacks the put-together appearance of Clinton and the other candidates. Sanders’ platform and track record only further demonstrate Sanders’ unconventional approach to politics. He is not your average politician, and that is precisely what makes him the ideal candidate for millennials. 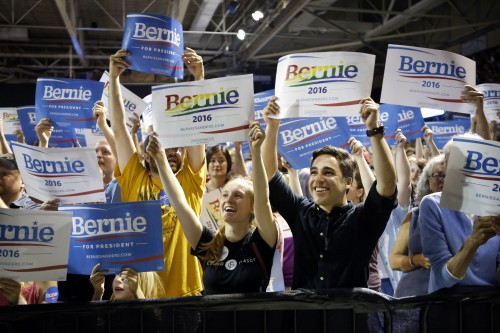 In this July 6, 2015, photo, supporters of Democratic presidential candidate Sen. Bernie Sanders, I-Vt., cheer at a campaign rally in Portland, Maine. Sanders is packing ’em in: 10,000 people in Madison, Wisconsin. More than 2,500 in Council Bluffs, Iowa. Another 7,500 this week in Portland. The trick for the independent senator from Vermont is to turn all that excitement into something more than a summer fling.(AP Photo/Robert F. Bukaty)

Sanders has called for a “political revolution” and is campaigning on five main issues: creating decent paying jobs, income and wealth inequality, getting big money out of politics, climate change and providing all working Americans with a livable wage. While the senator is extremely progressive regarding social issues, his campaign is more focused on increasing government intervention in economic issues—a concept that resonates with a majority of millennials. According to a poll conducted by Harstad Strategic Research, Inc., more than 70 percent of 18- to 33-year-olds desired more government regulation in economic issues including making college more affordable, creating jobs, helping the poor, providing retirement security for seniors and the economy.

Yet even as millennials desire more government regulation, they lack trust in the federal government as a whole. In a March 2015 Harvard University Institute of Politics poll, only 25 percent of 18-29 year olds reported that they trusted the federal government. President Obama is seen as trustworthy by only 37 percent of that same age group. Sanders, on the other hand, was viewed as “honest and trustworthy” by 71 percent of Democratic caucus goers in a Quinnipiac poll taken this July.

DePaul student Niki Urell is a vocal supporter of the senator.

“He’s not appealing to the wealthy and powerful,” Urell said. “He’s trying to disintegrate the imbalance of wealth and power. He recognizes power in community over individualism. If Sanders is able to reach these people who have essentially given up on our government and can motivate them to actively participate in our political system—not only by voting, but by joining his campaign in mobilizing change, by actually marching through Washington behind Sanders when he leads these serious and radical movements — then I think Sanders will certainly (win) the Democratic nomination and more importantly, (be) the next president.”

MSNBC’s Alex Seitz-Wald went so far as to call Sanders an “anti-politician.” In an age where extreme mistrust and hostility towards politics are evident, an anti-politician may be exactly what the millennial generation needs in a president to restore their faith in the political system. Regardless one’s political views, every millennial should make the effort to educate themselves on the candidates and vote.

“You should think about why the Koch brothers are going to spend a billion dollars on this campaign,” Sanders said. “If they think politics is pretty important, maybe you should as well.”