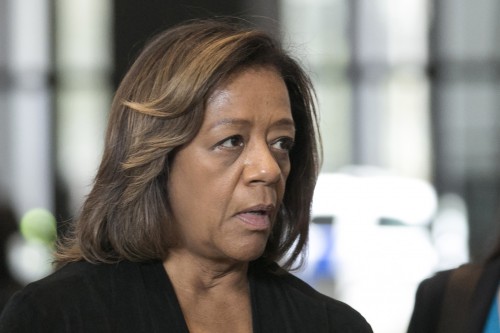 FILE – In this Oct. 13, 2015 file photo, former Chicago Public Schools CEO Barbara Byrd-Bennett apologizes to students, parents and educators before leaving federal court in Chicago after she pleaded guilty to her role in a kickback scheme. Detroit Public Schools says authorities are investigating contracts awarded by Byrd-Bennett during her tenure as chief academic and accountability auditor for the Detroit schools when that district awarded contracts worth about $3.4 million to Synesi Associates, one of the companies named in the Chicago indictment along with its co-owners. (Ashlee Rezin/Sun-Times Media via AP, File) MANDATORY CREDIT, MAGS OUT, NO SALES; CHICAGO TRIBUNE OUT

A multi-million-dollar bribery scheme has left former Chicago Public Schools (CPS) CEO Barbara Byrd-Bennett criminally charged in a 23-count indictment. According to her emails, Byrd-Bennett, a former employee at SUPES Academy, planned on returning to SUPES after awarding owner Gary Solomon and Thomas Vranas with non-bid contracts, valued at $23 million.

These non-bid contracts were intended to fund a training program for principals and administrators. Instead, the finances were used for the sole purpose of greed, with long chains of emails revealing Byrd-Bennett would over time receive about $2.3 million from SUPES after she resigned from her position at CPS. The three individual defendants and corporations are now facing multiple charges of mail and wire fraud.

These allegations come weeks after Mayor Rahm Emanuel made an appearance on DePaul’s Lincoln Park campus, speaking at Know Tomorrow’s Day of Action event on climate change. Emanuel urged students to become more active with environmental issues and make a difference in their community. But with the ongoing problem of corruption in CPS surfacing, cases such as Byrd-Bennett’s seem like more of an immediate issue that needs to be dealt with.

Paul Zionts, dean of DePaul’s College of Education, has followed Byrd-Bennett since her employment in Cleveland and is saddened by the recent charges against her.

“I was very disappointed,” Zionts said. “CPS has had a lot of turnover over the years, and they needed stronger leadership. No one could have predicted that Byrd-Bennett was going to be involved in something like this. I was living in Shaker Heights when she was the superintendent in Cleveland, and I never heard anyone say anything bad about her. She shamed the office. On one side of her mouth she was talking about how important it is to educate the kids, and then on the other side she was taking million of dollars out of their education.”

Although Zionts is disappointed with continual corruption in CPS, he believes that you can’t necessarily blame those who hired her for what transpired.

“Byrd-Bennett had an excellent reputation before she came here. You can’t fault somebody for choosing her,” he said. “You could question the system that allows this to happen. Whoever watchdogs, needs to take better care of making sure these things don’t happen.”

Sophomore Eric Shurson agrees with this notion and believes more scrutiny should be applied within Chicago’s Board of Education.

“I don’t think it’s necessarily fair to give the mayor all of the blame,” Shurson said. “That being said, a little bit of the blame could be put on the Board itself. There has to be more safeguards, and they need to be more conscientious of where the money is actually going. If you’re in public office, you should try and maintain your integrity by having checks and balances of what’s going on in your cabinet.”

SUPES co-owner Solomon was a vocal advocate for the hiring of Byrd-Bennett and had worked with some of the Emanuel administration before engaging in his corruptive behavior. DePaul sophomore Adolfo Castrejon is aware of these facts and believes that putting some blame on the mayor only makes sense.

“What keeps happening is they use the CPS chief as a scapegoat, and that’s why no one points their fingers at Rahm,” Castrejon said. “I think the voters should take note of that, and try to push their influence on Rahm and CPS.”

Castrejon attended Pasteur Elementary School on Chicago’s Southwest Side before transitioning to Whitney M. Young Magnet High School, a college prep institution on Chicago’s Northside. He said he is grateful for the opportunities he was given because they helped him realize the social disparities within CPS between the south and north sides of the city.

“I think CPS is sending a really awful message,” Castrejon said. “Schools in the north are getting more resources and funding for the things they need, while schools on the south side aren’t getting the same resources. I’ve seen that coming from an underfunded school on the Southwest Side to going to a selective enrollment school.  What is CPS trying to say with that? Are the kids on the South Side worth less than the kids on the North Side?”

Shurson, who plans on becoming a high school physics teacher for public schools, has a similar viewpoint, and finds that in order for change to happen within CPS, the mindset of officials working in the system needs to be altered.

“I’ve always looked at it as you don’t go into education for the money,” Shurson said. “That should never be the priority. Seeing that there are officials who prioritize money and their incom, over the education of children and their advancement in learning is disheartening, especially when it hits so close to home.”

With CPS having such a long history of corruption, it’s hard to believe these acts will be prevented in the future. But Zionts offers a simple solution: better and consistent leadership.

“Hire the best person to take over,” he said. “I would like to think we would hire somebody who is a proven leader that can put us on the right track again. We not only need leadership, but consistent leadership.”

Although Byrd-Bennett has been rightfully charged in this case, this doesn’t put an official end to corruption in the city. There needs to be greater change implemented to CPS in order to stop selfishly depriving little boys and girls of an education.

However, it’s not just a one-man job. We, as voters, need to pay close attention to which we elect into these positions, specifically the mayor of Chicago. Emanuel should be held more accountable of scandals that occur within CPS. Additionally, there should be a better watch on how these finances are handled, so that we can move away from continuous corruption and towards improved education.

If Emmanuel is not able to withhold this responsibility, then we should not continue to elect him into this position. Continuing on this path of electing ineffective leaders could make this corruption trend in CPS irreversible.