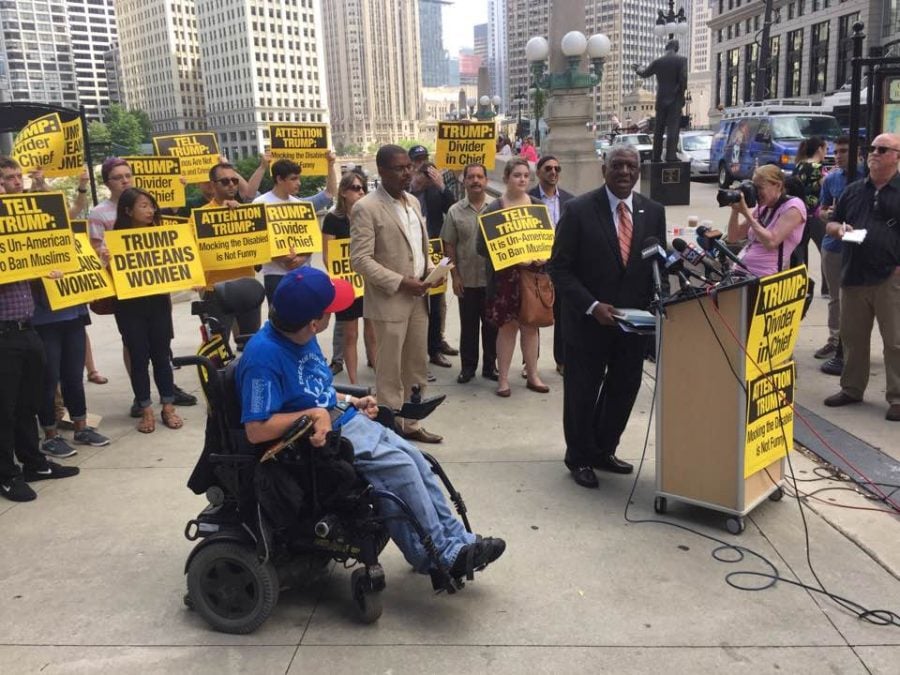 For nearly a half-hour, activists representing the Latino, LGBTQ, Muslim, disabled and other communities offended by Trump’s rhetoric spoke along with Chicago city clerk and Democratic candidate for comptroller Susana Mendoza and Cook County Commissioner Chuy Garcia in what became a stern rebuke of Trump. The words demonstrated the one thing that may unite Democrats and liberals above all else: preventing the New York billionaire from reaching the Oval Office.

“While I know he talks about this crazy wall he wants to build, I say that we all join forces and build a wall between him and the White House,” Mendoza said to applause and chuckles.

Behind Mendoza and other speakers were around 20 demonstrators holding signs with phrases ranging from “Trump demeans women” to “Latinos are not rapists and criminals” to “divider in chief.” Many holding signs were sent from the campaign of Democratic U.S. Senate candidate Tammy Duckworth, who did not attend the event.

The message, however, was clear.

“Trump’s message is divisive and it’s hateful,” said Ben Head, political director for U.S. Rep. Jan Schakowsky. It was the congresswoman’s political organization that took the lead organizing the event. “Our nation really needs to come together and solve a lot of serious problems and I just don’t see any universe in which Donald Trump is that unifier.”

The rally also somewhat displayed the Democrat’s efforts to tie down-ballot Republicans to Trump. With Mendoza running against incumbent Leslie Giesler Munger, appointed by Gov. Bruce Rauner following the sudden death of Judy Baar Topinka, and Duckworth going up against U.S. Sen. Mark Kirk, Democrats believe that Trump with motivate the Democratic base to get out and vote in November.

Ella Sampou, a student at Skidmore College in Saratoga Springs, New York, lent her voice to the Never Trump effort. Once skeptical of her political power as an individual, Sampou wanted to demonstrate her ability to make an impact outside the ballot box.

“I voted for the first time in the last presidential election and since then, I try to be politically active in any way I can whether that’s using my vote or using my presence on the street,” Sampou said. “I’m here today at an anti-Trump rally because it’s one way for me to use political activism to my advantage.”

While organized and well-behaved, the protest proved much smaller than expected. Some had predicted hundreds of people to show — not an unrealistic expectation given the city’s recent spate of activism, as well as the incidents that occurred last time Trump came to town — but the smaller group dispersed some after the press conference ended and before Trump’s scheduled time for a fundraiser.

Another brief protest occurred on the same site later in the day, which featured around 10 activists affiliated with NexGen Climate, a pro-environment interest group started by billionaire Tom Steyer.

In an interview following her speech at the first protest, Mendoza was critical of Munger for not making her stance on Trump more clear. Munger has decided not to attend next week’s GOP convention in Cleveland, but has thus far refused to publicly criticize Trump for his remarks.

“She still hasn’t denounced him. She hasn’t said she’s not with him. She just said she’s not going to the convention,” Mendoza said. “And we’ve asked and the press has asked. And her response has been that she’s too busy with the the problems of the state to give that any thought, and I think that’s a ludicrous answer.”

“I mean you only need a half of a nanosecond to know that Donald Trump is bad for America and you should do everything you can do disassociate yourself,” she added. “And not only that, but actually speak out against him and against his divisive and hateful rhetoric.”

Kirk, facing a challenge from Duckworth, has instead stated he will not support Trump and has criticized him in several campaign ads.