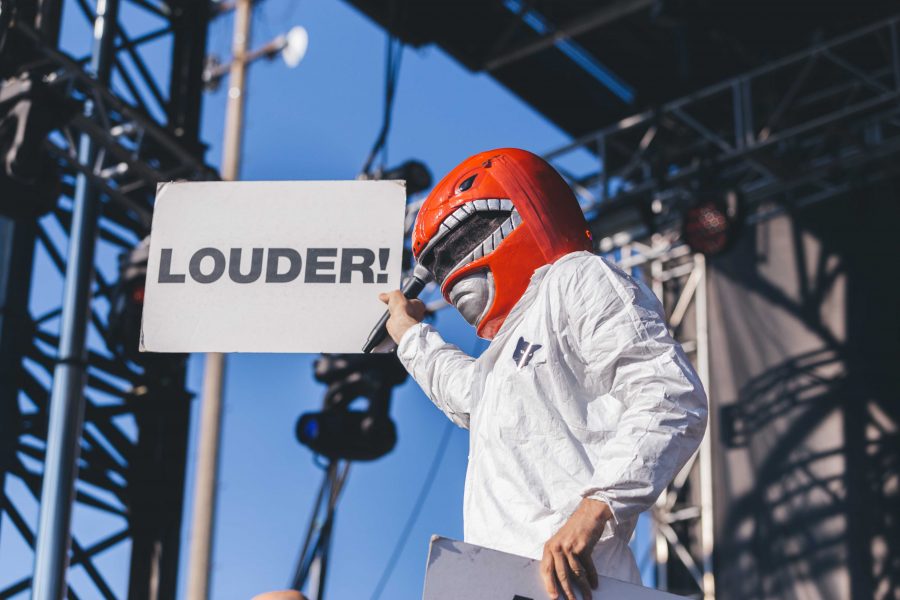 Lead singer of Super Furry Animals Gruff Rhys directed the audience with cue cards and sang through a helmet during their Saturday performance at Pitchfork Music Festival.

The levels of energy — along with the heat and sweat—were undeniably high on Saturday at Pitchfork.  The grass remained filled the entire night, as long lines wrapped around beer tents, mini thrift shops and food huts that all converged in a mass of hundreds in front of the three stages.  Saturday was a day of the vibrant and colorful Sufjan Stevens, a lovely appearance of John Cusack with Brian Wilson as they brought film to reality and a message of love from many of the artists, as they ensured these past tragedies will not cloud the joy music brings.

The 90s hip-hop trio brought back old hits and some new ones for their fans.  For those hearing for the first time, Digable Planets delivered the cool of the afternoon, with their slickness, the snare and the trumpets, and those recognizable beats of the 90s.

Their set was a mix of old-school instrumentation with some messages about the violence happening in the city and around the country tied in. They were lively and got a lot of crowd involvement. It was also rather interesting that female member Ladybug was one of the first female hip-hop performances of the festival — a rarity in a genre overly dominated by males.

RP Boo easily brought one of the most interesting sets of the festival, as the Chicago producer brought his footwork dancing music to the stage.  RP Boo and his crew—who invented the dance music in the 90’s—kicks off Saturday by getting the crowd dancing as well.  The dozens of dancers in front of us, moved swiftly and smoothly with every turn to every rhythm.

While Digable Planets and RP Boo brought energy and cool to their stages, Martin Courtney slowed things down and dialed it all back.  Courtney delivered a mellow performance, one for the lawn chairs in the back of the grass, rather than those who stood in front, hearing Courtney’s electric guitar get drowned out by the sound of the Savages across the festival.  Courtney’s performance was nothing special, nothing new, and nothing for me.

God bless Super Furry Animals for bringing the sound back up and providing the much needed wakeup call at Pitchfork.  As Gruff Rhys and the rest of his Welsh psychedelic band rocked what looked to be a Red Power Ranger helmet, the crowd were undeniably in for something stranger and weirder.  But it was a good weird.  The songs are catchy and ever-changing, as they play “Receptacle For The Respectable”, a number of styles flicker in my head, as if the Beatles met psychedelia and multiplied it by 10—turning it up a little few notches of weird.

In what was probably the most anticipated performance of the night — as well as the whole festival — Brian Wilson took the stage in celebration of the 50th anniversary of the Beach Boy’s  iconic “Pet Sounds.”  The 74-year-old artist sat center stage along with a large band, including former Beach Boys guitarist Al Jardine.  Though many looked forward to the performance, it was hard for some to come to terms with the fact that Wilson no longer had the might for such a large crowd.  And while the band didn’t hold back on the classics — playing “God Only Knows” and the famous “Caroline, No”— and even when John Cusack—who played Wilson last year in “Love & Mercy”— took stage and sang along Wilson, the strength and vitality that was once Brian Wilson was frankly not there.

Sufjan Stevens had it all.

If you asked at the beginning of Saturday, who I thought would deliver the best performance of the night, Sufjan Stevens wouldn’t be mentioned.  But I was wrong.  Stevens and his band, delivered not only visually but also performed one of the best sounding sets of the festival.  Dressed in bright highlighted yellow and orange colors, along with angel wings on his back, Stevens and his band not only sang, they danced.  As projectors shot fancy montages on the stage and all over the festival grounds, the set came to life.  While the costumes and colors make it seem as if the sounds that come along with it might be something from Super Furry Animals, Steven’s vocals and his indie folk band remain faint and quieter as they played “Should Have Known Better.”  The components of Sufjan Stevens don’t seem as if they fit the festival atmosphere, but I assure you they did.