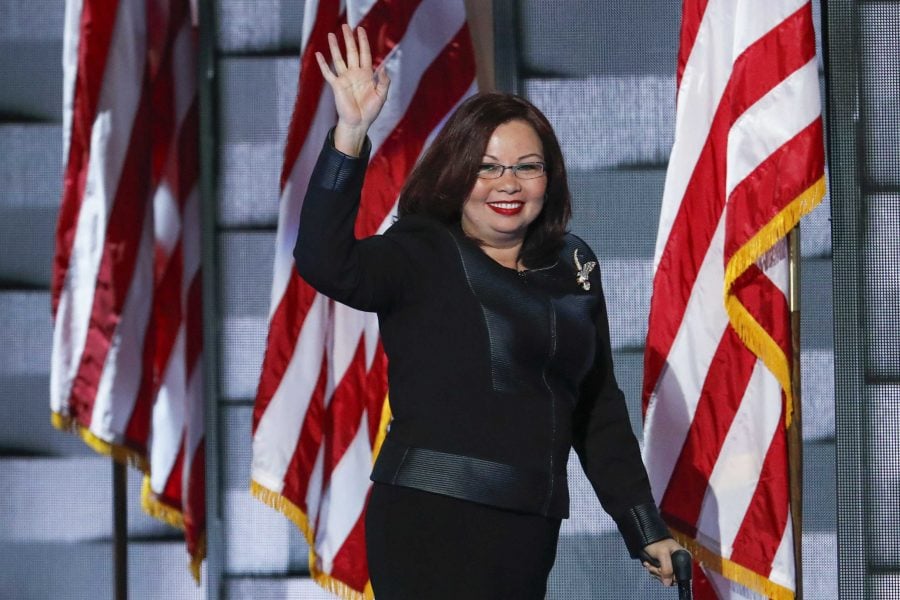 Duckworth, a former U.S. Army helicopter pilot who lost both her legs while serving in the Iraq War, used the story of her life – from living on food stamps as a kid to her experience at war to becoming a mother – to instead make the case for her party’s nominee, Hillary Clinton.

“My (daughter) Abigail already knows women can fly helicopters in combat,” Duckworth said. “And in 102 days, when we elect Hillary, my daughter’s first memories of a President will be of a woman.”

Duckworth was critical of Trump’s recent comments encouraging the Russian government to hack into Clinton’s emails as well as his view of America; a vision, according to Duckworth, that says “if you get knocked down, you stay down.”

Instead, Duckworth encouraged Americans to “choose a different path” and elect Clinton. The nearly five minute speech came on the fourth night of the convention, a day that had a heavily patriotic theme.

Duckworth is running for incumbent Republican Sen. Mark Kirk’s seat, a race that has been circled as the Democrats’ top pick up opportunity this November.

While polling has largely been scant in the race, it is presumed to be close. Plus, recent internal polls conducted by the Kirk campaign indicate a statistical tie.

Certainly, polls conducted by campaigns (and all polls for that matter) should be taken with a grain of salt. However, the same poll also found Clinton with a double-digit lead in Illinois. This suggests there are enough potential crossover voters to keep the race close.

This would certainly keep with Kirk’s reputation. Before being elected to the U.S. Senate in 2010, Kirk served for years as a congressman from a strong Democratic district.

Plus, Kirk has very publicly disavowed Trump and holds several liberal positions (pro-gun control, marriage equality, pro-choice, Never Trump). So while tearing into Trump may be popular with Democrats, it may not quite be the “trump” card if you will in Illinois given Kirk’s stance.