Qandeel Baloch and the dishonorable act of ‘honor killings’ 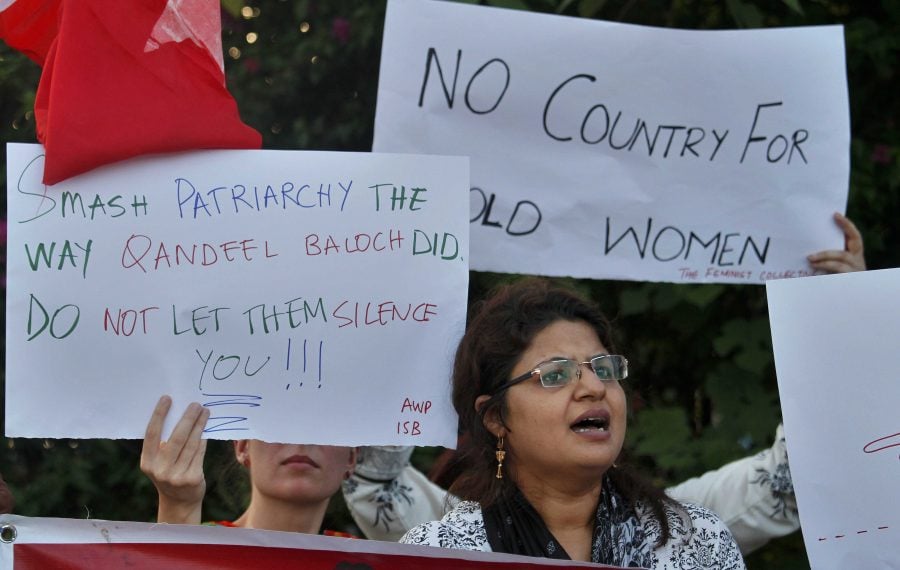 An Activist of the Awami Workers Party chants slogans during a demonstration to condemn the killing of model Qandeel Baloch and against honor killings, in Islamabad, Pakistan. Nearly 1,000 women are murdered in Pakistan each year for violating conservative norms on love, marriage and public behavior. The so-called "honor killings" are often carried out by family members. (Anjum Naveed | AP)

Recently, many users of social media heard of the tragic news regarding the death of Qandeel Baloch. Baloch, born Fouzia Azeem, was a social media celebrity, especially among the Pakistani community. She was a controversial figure because of her fashion choices and sensual online appearances.

More conservative users, and those with a certain “image” of Pakistan, threatened Baloch repeatedly on various platforms, complaining that, as one Twitter user put it, she “had ruined the name of the country.”

On July 15, Baloch was strangled to death in her family home not by one of the raging social media users disgusted by her actions, but by the hands of her own brother, Waseem Azeem. He drugged not only Baloch, but his parents as well while they slept. He then murdered his sister by asphyxiation in her room where her body was found the next morning by her drugged mother.

To make matters worse, Azeem publicly admitted to the crime and referred it to as an honor killing.

“I am proud of what I did,” said Azeem, in an interview with CNN. “I drugged her first, then I killed her.”

What can be learned from Baloch’s “honor killing,” is that there is nothing honorable about her death.

Calling a murder an “honor killing” does not justify the actions. In fact, the only purpose it serves is to dishonor the criminals and their family. If Baloch’s brother thinks that peace and harmony in Pakistan have been restored because his sister’s “dishonorable” acts have been removed from society, he is entirely mistaken.

Around a thousand women are victims of honor killings annually, more than 1,100 murdered in 2015 and over a thousand in 2014, according to Pakistan’s Independent Human Rights Commission annual report. These heinous acts are usually committed by close relatives. Azeem stated that his reason for killing Baloch was because she brought dishonor to the family.

No Azeem, you brought dishonor to yourself and your family.

In an effort to minimize the attention garnered by his sister and her influence online, Azeem failed miserably and actually furthered Baloch’s prominence and aspirations primarily within Pakistani society. Even those who had not heard of Baloch prior to her killing now know of her bold and outspoken ambience. Her murder made international news. Even after her death, she continues to attract fame and publicity much to the disgust of her brother. He may have ended her life, but her presence and mission live on.

“The fact that many of (Baloch’s) videos went viral suggests a titillating fascination with confident female sexuality,” stated BBC News. “Along with fear of its power and of her assertion of independence.”

Those who support Baloch’s murder perpetuate the patriarchal society that is responsible for the violence committed against women.

I expected many men to applaud and congratulate Baloch’s death. However, I was surprised when I learned that female voices are among the opinions supporting her murder. Although men can also benefit from understanding Baloch’s ambitions, it is important to focus on the negativity that was aroused by women.

When someone like Baloch comes along trying to change the status quo, not only do many individuals reprimand her but, now, her murderer is being applauded. This is a person who attempted to challenge the gender-based mentality of an entire nation that would in turn improve the circumstances of Pakistani women all around.

Women who are voicing their opinions on how “Baloch deserved what was coming to her,” are reinforcing the same masculine views that deemed her inappropriate and led to her death. She proclaimed herself a feminist and was vouching for you and your sisters and mothers and daughters to obtain a world in which you are not limited by patriarchal restrictions in every corner.

This occurrence along with every other victim of an “honor killing” is not reason for aspiring feminists and social justice advocates to back down from fighting for equality in Pakistani society. If anything, these events should be all the more reason to continue the struggle for women. In a nation that consists of many masculine-centered beliefs of how the state should operate, all women must be present to counter any manifestations of violence aimed at suppressing their voices and presence.