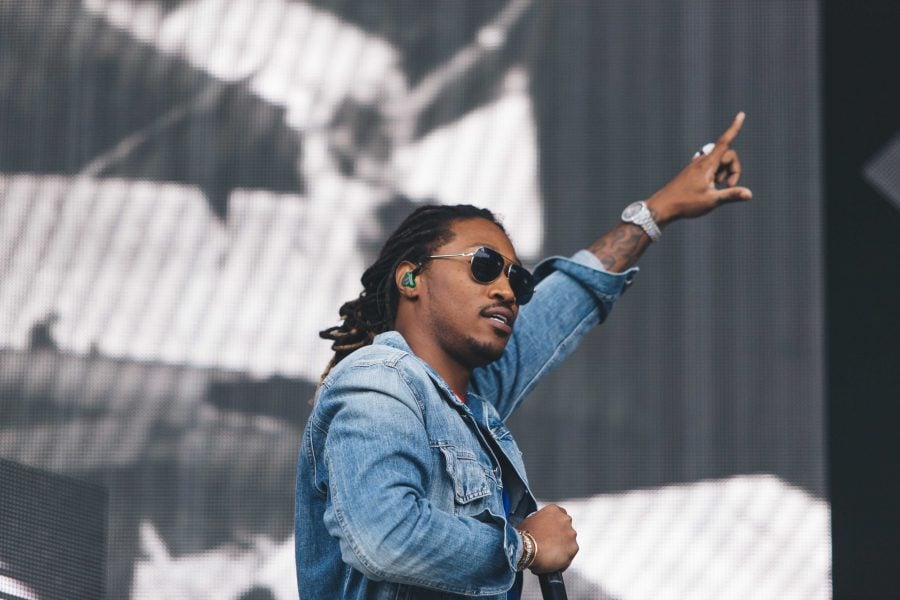 Future's performance at Lollapalooza on Friday drew a large crowd and featured a special guest performer. (Josh Leff | The DePaulia)

As crowds of people shuffled through Grant Park early Friday evening, rain drops scattered among them.  The sky remained dull and grey for the majority of the afternoon, though the spirits did not.  Finding themselves halfway through Lollapalooza, exhaustion kicked in but it was nothing that Saba or the highly anticipated Radiohead set couldn’t fix.  Friday’s Lollapalooza may have seemed a little smaller in retrospective to the spread-out line up from Thursday’s opener, but the key sets from last night’s festival satisfyingly delivered.  And of course, Chance the Rapper made another surprise appearance.

I don’t know if I’ve ever felt so happy for an artist at a concert.  When Saba proclaimed to the crowd that this was the happiest day of his life, his fans gratefully cheered back.  For not only playing his biggest performance to date, but also having his set early in the afternoon, the rising Chicago rapper held the crowd’s excitement and hype to the best of his ability.  Saba, who gained notable attention for his feature in Chance the Rapper’s “Angels,” will quickly and successfully adapt to his own growing large fanbase.

Like Lettuce or don’t, but they brought the funk to Lollapalooza last night.  The band, which formed in the ’90s, delivered most of their songs from “Crush,” the band”s fourth album.  The head bobbing in the crowd synced well to the rhythmic trumpet levels brought by the band”s Benny Bloom.  While the band’s jazzy style didn’t draw the largest crowd (the rain didn’t help), the majority being close fans or just passers-by, Lettuce still delivered a chill session to a chill but drizzly afternoon.

I assume that when Mac Miller first performed “Donald Trump” to his fans, neither of them knew that the titular character of the song would become the official Republican nominee for president in 2016.  But now it is 2016, and the best part about his performance of “Donald Trump” was that satisfying disrespect the crowd cheered for at the mere mention of the tycoon billionaire’s name.  From boos to middle fingers, the crowd showed no intention of downplaying their distaste after Miller played the 5-year-old hit single. While the rapper”s fame may have diminished in his absence the past couple of years due to drug addiction, his presence on stage proved that he was back and ready for more.

Before the rapturous performance set by A$AP Ferg, the DePaulia caught the Harlem rapper making rounds around the Lollapalooza grounds with his good friend — and Thursday performer — Danny Brown.  There was no denying the crowd was under the rapper’s spell.  Whether it was a middle finger to the sky, or his work from “Trap Lord,” Ferg had the crowd in his control — and that’s exactly where the fans wanted to be.

Easily the highlight of the day, Future delivered what was not only the best set of the day but so far one of the best performances at the festival.  From the second day surprise appearance of Chance the Rapper (who showed up during Flosstradamus” performance Thursday), got the crowd wild with his performance of “No Problem” from his third mixtape Coloring Book. Beyond the surprise appearances, make no mistake that Future was at the captain’s wheel on stage, slamming the crowd with jam after jam from “Jumpman” to “F*ck Up Some Commas.”  The rapper had easily maintained the hype and high ecstatic energy from his crowd throughout his entire set.

In what was easily the most anticipated performance of the night, Radiohead returned to Lollapalooza after headlining eight years ago with their album “In Rainbows.” The set-up this time was similar: new album (“A Moon Shaped Pool”), gearing up for a world tour and an intense light and visual show for those who couldn’t see the stage.

For die-hard fans this was one remarkable set that not only proved the professionalism and great instrumentation Radiohead has earned over the past few decades, but also affirmed the undeniable talent they showcase during a live performance.  Perhaps this was the best performance of the day (though I still stand by Future) but this was indeed something special not only for the fans, but for them.  They played the oldies, the nostalgic hits, “Everything in its Right Place”, “Karma Police”, “My Iron Lung” and the new hits, “Burn The Witch,” and “Ful Stop.”  Across the park was Major Lazer’s set that surely sent people off their feet and into a frenzy, but what Thom Yorke and the rest of the Oxford-based band delivered was a mesmerizing set that captured just why Lollapalooza was so special.  This will undoubtedly be one of the most memorable Lollapalooza performances in years.