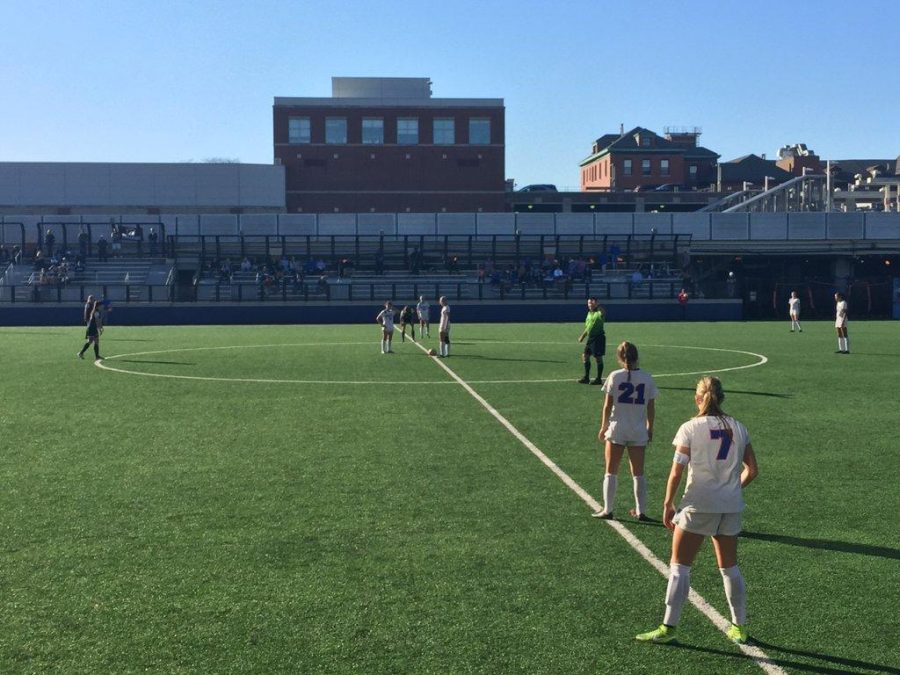 The season opener for DePaul women’s soccer featured the Blue Demons crawling back into the match to salvage a 1-1 draw against Fordham Friday at Wish Field.

“I think it’s just a good lesson,” head coach Erin Chastain said. “Fordham (0-0-1) is a good team. They’re really hard working, they’re well coached and I think we have to be ready for that and then some.”

The Blue Demons (0-0-1) started slow and the Rams took advantage. Fordham controlled the possession and their midfield was a wall that blocked the Blue Demons’ attack. This kept the ball in DePaul’s half.

The Rams were pushing the ball into DePaul’s half of the field for the start of the match and it paid off in the 22nd minute. Relentless pressure by the Rams led to a flurry of shots in the box, which were blocked by junior keeper Lauren Frasca, but one shot was deflected and Paoletta was there to tap the ball into the empty net to put the Rams on the board.

Following the goal, the Blue Demons pushed more and were able to get a couple of opportunities on goal. The best opportunity came off a free kick in the 39th minute, where freshman defender Avery Hay got her head on the ball but sent it over the bar to keep Fordham in the lead.

“Fordham absolutely controlled the first half,” Chastain said. “I thought they outworked us, I thought they definitely wanted to win the game more than we did.”

The Blue Demons took their attacking momentum from the end of the first half and carried it over to the second half. They continued to attack and drew seemingly closer and closer to the equalizer, but they were continually frustrated as the half wore on.

It wasn’t until the 81st minute that DePaul would finally break through. Following a corner kick, the ball ping-ponged around the box and was inadvertently hit by a Fordham wrist, leading to a handball penalty called.

Senior forward Abby Reed stepped up to take the penalty kick and buried it in the bottom left corner to open up her 2016 account and to put the match back on level terms.

“We had worked on penalty kicks yesterday so I was pretty ready for it,” Reed said. “I was just focused because I knew there wasn’t a lot of time left and we had come so close to scoring.”

Both teams had chances in the final minutes of regulation, but neither could get the game-winner as the match went to overtime tied at one.

Save for a 45-yard strike from Reed that had to be pushed over the bar by Fordham keeper Megan Fitzgerald as time expired in the first overtime, neither team was able to put too much of an effort on goal in either overtime as the teams settled for a draw.

Chastain was pleased with the response the team had in getting back into the game.

“I thought we had a nice response to (the poor start in the first half) in the second half and kind of crawled our way back in the game and started to work harder,” Chastain said. “Then we scored and even after that (we) controlled the run of play more and created some nice chances we couldn’t capitalize on.”

Reed could tell the difference on the field, which she said was helpful in getting in position to earn the penalty.

“I think our overall mentality and energy level got a lot higher,” Reed said. “I think that in the first half we were really out of it and then in the second half we realized we needed to go a lot harder at them or else we wouldn’t get another goal.”

DePaul will play again next Thursday when they host Northwestern at Wish Field.