Commentary: The dream of the Chicago Cubs feels like a reality 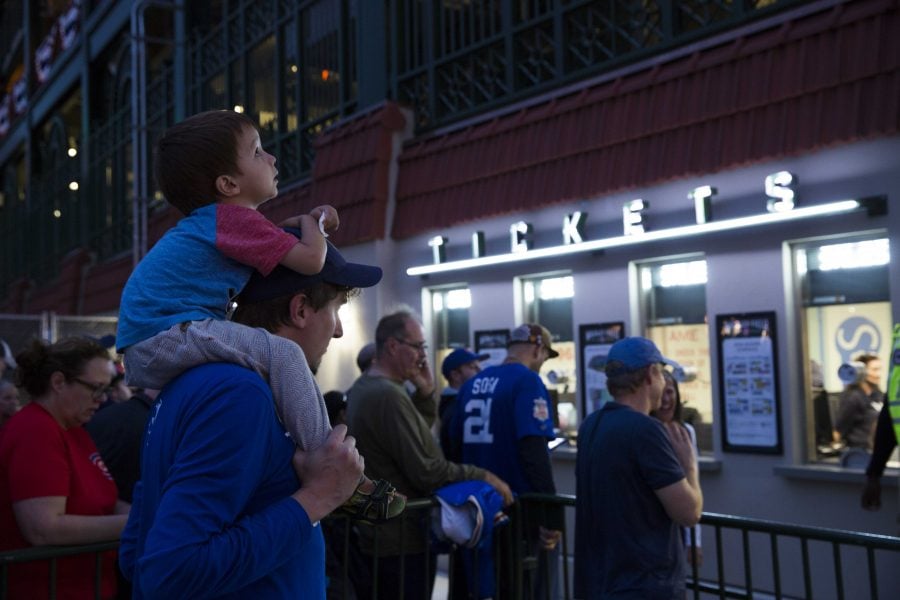 Though the Cubs lost last night, fans across multiple generations unite because of the team and their hope for the team (Geoff Stellfox | The DePaulia)

When I was two-years-old, I went on the field at Wrigley Field and met Andre Dawson. Fast-forward 25 years (plus some change), and he’s back at Wrigley to throw out the first pitch in Game Two of the NLCS, and I’m back in the stands. Life’s funny like that — it moves in circles, giving us small bits of nostalgia to remind us no matter how far we might move forward, the past is real.

Growing up, I spent summers in my grandpa’s auto repair shop. He’d be under a car, with only his legs peeking out, I’d sitting on the grease covered floor, handing him the wrong tools, and together we’d be listening to Pat Hughes and Ron Santo call the Cubs games on the radio. That was our thing. We heard Sammy Sosa break Roger Maris’s home run record, and Kerry Wood fan 20 batters in his fifth career start, all on the same old Toshiba radio with one blown out speaker. When my grandpa got sick, my dad, my uncles and I took him to Tucson, Arizona for spring training. The Cubs were our thing. It was about family.

As I got older, things began to change and I started to get angry at the Cubs. I started to realize how little the organization cared about the fans. Money makes the world go round, and that very idea was rearing it’s ugly head with my beloved baseball team. Between 1990 and 2014, the Cubs made the playoffs four times and to this day, I can’t stand the “loveable losers” moniker. There’s nothing to love about losing and being the joke of the MLB. Hell, even the Red Sox and White Sox won a World Series in this decade. Yet, here we are, left to languish at the bottom of the league, relying on stunts like signing Kosuke Fukudome to offer us even a glimmer of hope.

Last year I covered the NLDS against the St. Louis Cardinals from the very same seats. I wrote about how it felt like a party, not the traditional drunken debauchery-filled Wrigleyville party, but a turning point and a celebration of a new era. It felt like a dream, one that I wish my grandpa could’ve experienced before he passed away.

Luckily this reality seems much brighter than that of the past 98 years. We’ve got a fun team that’s brimming with young talent, a manager who’s not afraid to make tough calls, and a front office who seems to finally give a damn.

Regardless of Sunday’s dull, 1-0 loss to the Dodgers, I noticed a sense of resolution from Cubs fans that hasn’t been here previously.  We had an unexpected joy ride last season, but this year we’ve got expectations. On my way out I noticed how many families were here with their kids to take in the moment, and it brought me back to those days with my grandpa. These kids might never know the joy of listening to the Cubs on a broken radio, but they’ll also hopefully never have to experience another 100-plus year World Series drought.

And hey, maybe the “Back to the Future” prediction may only be one year off.