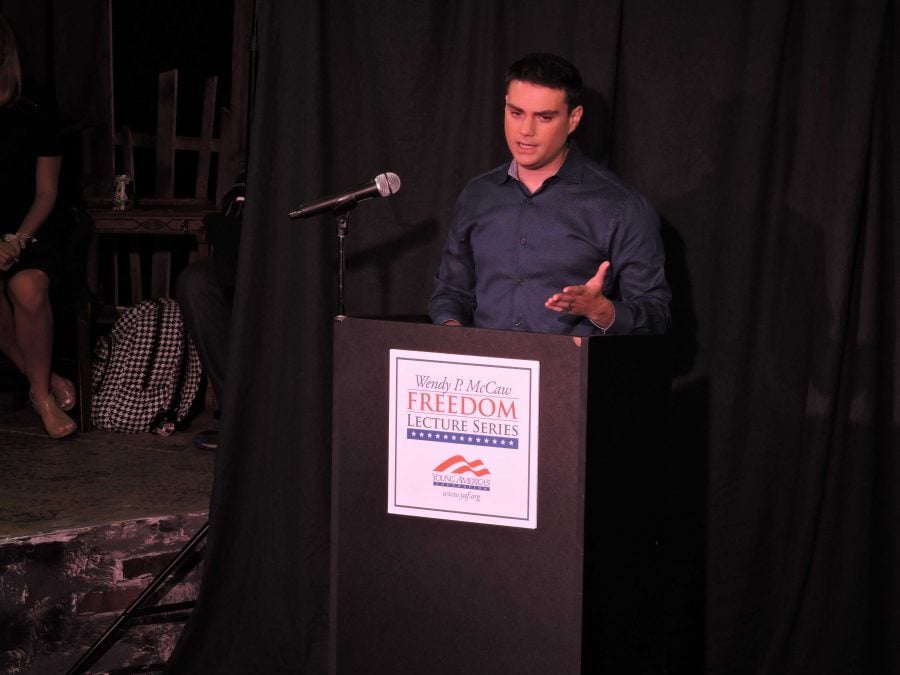 Ben Shapiro speaks at a DePaul Young America's for Freedom event Nov. 15. Shapiro was banned from speaking at DePaul in August. (Danielle Church | The DePaulia)

It was far from a warm welcome for Ben Shapiro when he arrived on DePaul’s campus Nov. 15. The conservative political commentator was confronted by security outside Cortelyou Commons Tuesday night when he tried to enter into the DePaul Young Americans for Freedom (DYAF) “Trigger Warnings, Safe Spaces and Attacks on Free Speech” event. Security told Shapiro he would be be arrested if he “were to create a problem” and “not leave campus.”

“If I attempt to enter that hall, right there, just to hear somebody speak, or if I attempt to ask a question or engage in free speech, you will have me arrested?” Shapiro said. “(…) I’m glad in a city that has some 4,000 shootings to this date, you have 30 members of security just for a 5’9”, 165 (pound) Jewish guy.”

Shapiro was supposed to give a talk with conservative speaker and author Christina Hoff Sommers, known for her critique of contemporary feminism. However, DePaul banned Shapiro back in August because they believed they didn’t have the proper means of security to host Shapiro based on what happened after he spoke at other college campuses across the country.

Vice President for Facilities Operations Bob Janis and Vice President for Student Affairs Gene Zdziarski sent an email in August that read “(h)aving reviewed recent reactions to this speaker at other campuses, and in particular his appearance at California State University – Los Angeles, our campus Public Safety department concluded they could not provide sufficient security in the event of a similar situation at DePaul.”

When Sommers took the stage around at 5 p.m., she immediately criticized the university’s decision to prevent Shapiro from speaking for the second consecutive time this year.

“I am the Factual Feminist and (I am) reporting for duty,” Sommers said. “My plan was to declare this hall a ‘safe space’ for reasoning and arguing and free expression, even safe for Ben Shapiro. But it appears that the DePaul administration decided that Ben’s presence would be too triggering for all of you. (…) I’m a little offended I wasn’t (banned). Is it because I’m a woman? Or an aging woman?”

She then addressed censorship as a “madness” on college campuses, arguing “freedom of expression is being replaced by freedom from discomfort.”

Minutes later, Sommers’s iPad began ringing. It was a FaceTime call from Shapiro. She put the speaker next to the microphone so audience members could hear him, and what he said was unexpected: he was less than a mile away at the Greenhouse Theater Center on Lincoln Avenue waiting for the audience to come meet him. Despite DePaul’s ban, Shapiro had found a way to beat the system.

Those in attendance at Cortelyou Commons erupted into cheers and immediately began filing out of the building, en route to the Greenhouse Theater. The new venue quickly became overcrowded with about 100 people packing the small room where Shapiro would be speaking. To ensure those who couldn’t fit in the room could still hear the talk, DYAF members set up two televisions with live streams of the speeches just outside the main event. About 50 attendees watched the speeches via live stream.

When the event ended, many audience members waited outside of the Greenhouse Theater hoping to catch a glimpse of Shapiro. Unfortunately for those not affiliated with DYAF, Shapiro hosted a meet-and-greet inside the venue exclusively for members of the organization. Despite that slight disappointment, attendees leaving the event appeared pleased that Shapiro was able to speak.

The university released a statement regarding the YAF event Nov. 16 explaining why Shapiro was not allowed entrance to the “Trigger Warnings, Safe Spaces and Attacks on Free Speech” event.

“The university informed DePaul Young Americans for Freedom that the school is open to having Mr. Shapiro speak on campus, but his participation in last night’s event was never part of program proposals submitted by DYAF,” the statement said. “To help ensure the event would proceed without disruption, the university and DYAF agreed that all guests would be required to register to attend. Registration closed when the system reached capacity attendance. Mr. Shapiro was neither a speaker nor a registered guest and therefore not eligible to attend.”