Chicago ranked best city in the world by Time Out 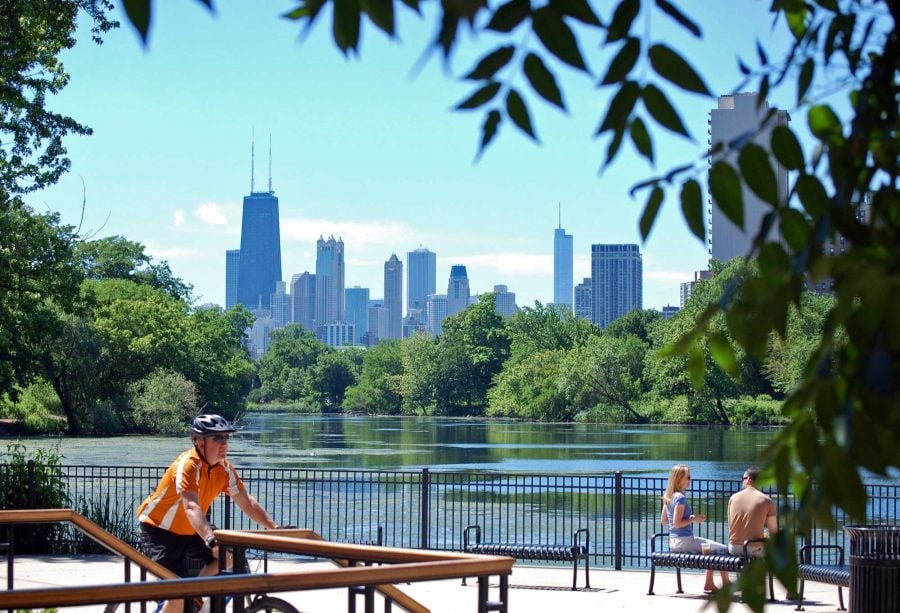 The skyline of Chicago is seen from the North Pond restaurant in Lincoln Park. The restaurant, as well as others in the city, contributed to Time Out scoring Chicago as the best city in the world. (Curt Brown | MCT)

Those who think Chicago is the best place to live might now have evidence to back it up.

An extensive survey of nearly 20,000 people in 18 different countries found that, when it comes to the things that make a city great, Chicago ranked highest across the board.

The Time Out City Index comes from the popular city guide website Time Out, which covers a city’s best things to do, events, restaurants, theatre and nightlife across the world. Cities surveyed include New York, Los Angeles, Paris, Sydney and Tokyo.

The city index asked residents to rate their city based on six key characteristics: dynamism (how vibrant and exciting life there feels), inspiration (ease or difficulty of living there), food and drink (cost and value of food options), community (neighborhood ratings), sociability (welcoming or isolating nature of living there) and affordability (whether people could generally get by okay), according to Time Out Chicago.

Chicago earned the top ranking in food and drink, community and affordability. It also placed in the top five for dynamism, inspiration and sociability, making it the only city to place in the top five across each of the six categories.

With unique bars and restaurants that range from cheap to expensive in every neighborhood, 88 percent of respondents agreed Chicago boasts a great food and drink scene. Chicagoans believe that great food abounds here more than in any other city. Melbourne came in second place to Chicago.

Because there are so many great places within walking distance of homes, Chicago ranked first in the community index, followed by New York City. Chicago also ranked second for people who love exploring different parts of the city, due to its 77 neighborhoods.

While it might not be the first thing that comes to mind, Chicago ranked first for affordability in comparison to other cities. Twenty-six percent of Chicagoans strongly agree that they can “live the lifestyle they want,” striking a balance between affordability and inspiration.

“Twenty-five percent of respondents said they have money left at the end of the month, and a night out on the town—relative to local average salary—came in the cheapest of any city we surveyed. The average income people suggested was ‘comfortable’ was 10 percent lower than the average wage, while in New York, London and Singapore it was 20 percent higher,” according to Time Out Chicago.

In general, top cities around the world shared what residents consider most important: plenty of food and drink options, great neighborhoods to explore, the right work/life balance and friendliness, according to Time Out Chicago.

Chicago ranked third in the dynamism category, with Sao Paolo in second place and New York in first place. Chicago ranked second in the inspiration category, attesting to the ease of living, with Melbourne coming in first. In the sociability category, Chicago took the fifth spot, preceded by Madrid, Sao Paolo, Mexico City and Lisbon in first.

With the rankings from this index, Time Out named Chicago as the number one city to enjoy life to the fullest, saying it has “a great restaurant and bar scene that won’t break the bank and the locals love to chat to strangers.” Melbourne, Lisbon, New York and Madrid followed, respectively.

In other survey questions, Chicagoans expressed satisfaction with their lives here. 42 percent of Chicagoans felt strongly that they make the most of the city, making us seemingly happier than residents of other cities. Higher than any other city, 58 percent of respondents reported feeling happy with their work/life balance.  Additionally, 53 percent said they have stayed up until sunrise in the last year, less than any other city surveyed.

Perhaps attesting to its Midwest location, Chicago is the city where people are most likely to strike up a conversation with someone they’ve never met, with 63 percent of people admitting to doing so in the last week.

But it isn’t all perfection in Chicago. Chicagoans reported feeling the least safe out of any city surveyed.

With a population of 2.7 million, it’s safe to say that this survey doesn’t cover everyone’s opinion. But these results do represent a city on the up with a population that takes in everything it has to offer.