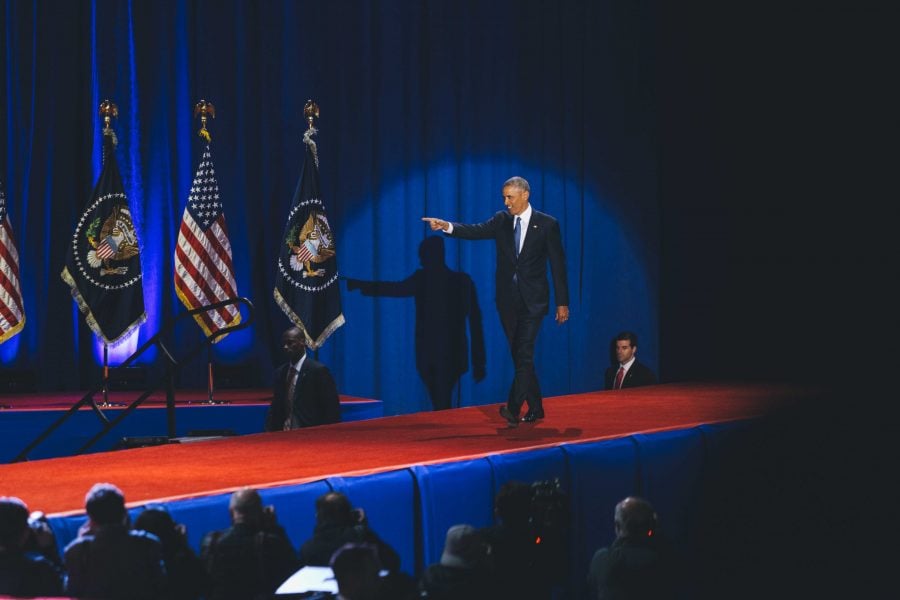 Tuesday night, I was one of seemingly a gazillion reporters sent to cover President Barack Obama’s swan song at McCormick Place. While there, a few thoughts popped into my mind: How Obama’s farewell compared to his other Chicago celebrations, his relationship with Chicago and how he shaped our political coverage at The DePaulia since first coming on the scene more than a decade ago.

With that, I thought it would be prudent to call up the person who covered his 2012 reelection celebration at McCormick Place for us, my friend and the former editor-in-chief of The DePaulia, Courtney Jacquin.

Jacquin graduated from DePaul in 2015 with both a bachelor’s and master’s degree in journalism. She currently serves as the editor of The Highland Park Landmark, a hyperlocal newspaper in Chicago’s north suburbs, part of the 22nd Century Media company.

Below is a transcript of our conversation, edited for length and clarity.

Courtney Jacquin: Hi Brenden! How are you?

BM: I’m doing just fine, how are you?

BM: So let’s delve right into it. Describe for the folks at home what you were doing at McCormick Place four years ago.

CJ: It was my first year on The DePaulia staff; I was the Arts and Life Editor at the time. We knew that Obama was going to have his election night rally in Chicago and it was something that I really wanted to be a part of. Our Nation and World Editor at the time, Lynsey Hart, was covering it, so I applied for a photo pass. We got approved and I went as a photographer.

It was just a really cool electric feeling in there. And it ended up then that something had happened with Lynsey, so I had to then write the main story from the night too, which was the first time I had ever written about politics, so that was funny. I didn’t plan on that. It was a tough assignment. I didn’t know what I was getting myself into with that, but it’s still probably one of my favorite things that I was able to do as an editor of the DePaulia. I still have my media credential pass — the paper is beautiful, it looks like a wedding invitation — it was really, really cool.

BM: Being there Tuesday night, I had a press pass and Josh Leff, our photo editor, had a photo pass. Like you said, I kind of felt that (same) electric atmosphere last night even though it was kind of a bittersweet moment of him saying goodbye.

The amount of media there was absurd. I mean there had to be 1,000 reporters there, it was insane. I’m sure it was the same when you were there (four years ago). I was literally a few feet away from Anderson Cooper, it was crazy.

CJ: I remember the media setup was just wild during the (2012) election. There were just tables and tables and tables, I mean every network had a big setup there. It was insane. I was like, oh wow, I’m like the least qualified person here, holy crap!

BM: You were in the crowd yesterday. How is it different being in the crowd vs. covering it? And how do you think think the two events compared?

CJ: It’s different when you’re there as a reporter. It was fun to actually be able to be a part of the crowd, to be cheering. It’s like when you’re a sports reporter and you have to cover your hometown team. You can’t really show your biases or show that you’re excited that they’re winning. So when you’re there on your own, you can kind of let that layer of journalism kind of fade away.

It was a really amped up, really happy crowd. But, there was also that kind of air of sadness that you knew this was the last one.

BM: It’s also significant that he came back to Chicago. It seems like he’s had a lot of these major moments here. Eight years ago, he said “change has come to America” with the backdrop of the skyline in Grant Park, and then obviously four years later at McCormick Place where it was reaffirmed and now he says goodbye. Perhaps this is regional bias, but it always seemed that there was something extra special about when the president came to Chicago. There’s a special connection he has to the people here.

CJ: Absolutely. Chicago is such a proud city. And the fact that we had someone in the highest office, I mean, Chicago can really put it on for Obama. He made the city proud. We hopefully made him proud.

I thought that even though he’s not from here, he’s adopted Chicago as his home and I that’s been so special. And really, now, it’s strange. Obama was elected when I was junior in high school. So obviously, I was alive and aware of things that were happening during the Bush Administration, but I really came to be active in my political life really only through Obama’s presidency. So, to transition out of that….

BM: Yeah, it’ll be strange. Even just talking to a lot of DePaul students, and I know it’s the case even for myself growing up in the Chicago area, we all grew up with Barack Obama as the first person to kind of inform our political lives. I was talking last night to a young women in the crowd who was a DePaul student and she had said that he represents our generation and the future. And I feel like there is that special place that a lot of young people, especially people from Chicago and people that go to DePaul, feel for the president. There were so many people from DePaul who waited in line to see that speech because they felt like they had to be there.

BM: Did you have to wait in the cold?

CJ: No, luckily, I was just blindly following people and I walked in through the parking garage, so I waited inside, which was fantastic.

BM: And it was just bitterly cold that Saturday.

CJ: It was like two degrees, it was really, really bad. But look at how many people came out just for a chance to be in that room. It’s crazy. Obviously, the president will always draw large crowds, but I feel like that was a special combination of Chicago being proud and just what a lasting legacy that Obama is going to have that he drew that many people that early on a cold Saturday morning in Chicago.

BM: We overlapped one year on staff. This is my fourth year on staff and you were on staff for three years. Literally, I used the search term ‘Obama’ on the DePaulia website. And I know obviously we had our website issues, so who knows if all of our stuff is up there, but there are more than 400 results for the name Obama. And I just found that really significant. It’s interesting how he’s kind of shaped our coverage at the DePaulia.

CJ: And I can tell you for a fact that there were a lot of stories that were lost still [laughing], so that’s just a fraction of it.