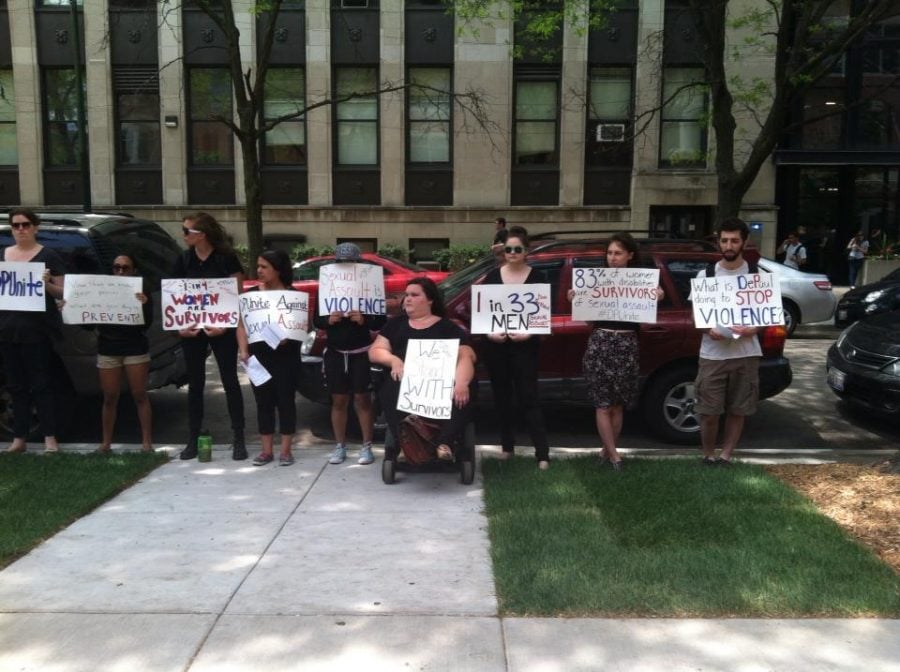 Demonstrators stood outside of the Arts and Letters Halla the Schmitt Academic Center last Tuesday, and the Student Center the following Thursday in silent protest of DePaul’s handling of the sexual assault issue.

The roughly 25 students, affiliated with the group DPUnite, held up posters with sexual assault statistics as students walked past in between classes. Several wore hoodies and sunglasses in order to conceal their identities.

In leaflets passed out during the displays, the group describes themselves as “a group of DePaul students united against sexual assault and rape culture on our campuses.”

In addition to writing sexual assault statistics, the group listed complaints that they have with the university administration. Among those are DePaul’s apparent inadequate procedures for dealing with sexual assault, its misinterpretation what the group want in terms of transparency, and a perceived tendency to ask students to come up with simple solutions to a complex problem.

“We are kind of done talking about the issue, we need things to happen and not talk about it,” sophomore Aly, one of the group’s leaders who asked for her last name not to be identified said.

Silence was an overarching theme of the demonstrations, which began Tuesday at 12:40 outside Arts and Letters Hall, and again outside of Schmitt Academic Center at 2:20, continuing at those same times thursday outside of the Student Center.

“It’s shocking to walk around campus and see a bunch of people in black being absolutely silent. It caught everyone’s attention, as it was meant to do,” she said.

The issue of sexual assault awareness has been a hot topic on campus ever since a group known as DePaul Exposed
dropped two controversial banners in the Arts and Letter Hall last month that called out the university administration and athletic department for supposedly not doing enough to protect victims and punish their attackers.

“I really, really support this demonstration. I think that we are facing a catastrophe on DePaul’s campus, and I really think that it’s time to really consider a one day strike over violence on DePaul college campus and the way the institution is complicit with it,” a person affiliated with the university who wished to remain anonymous said.

Most people passing by were either supportive of the demonstrators or ambivalent. According to Aly, there has been a lot of support from students. While there were some negative reactions, she said that is to be expected with things like this.
Freshman sociology major Michelle Ramirez supported them.

“I really like the statistics they are showing right there and their silence I think is really powerful,” she said.
First year graduate student Faheem Adams stopped by the protest and expressed his support, saying that the issue must be brought to the administration’s attention.

“I’ve known of things that have basically been shoved under the rug because of the prestige of the university and the athletes and what not,” Adams said. “So I think it’s about time someone stands up for the school and the students as a whole.”

While no further protests are currently scheduled, the group hopes to keep the issue in the debate on campus until changes are made.

“I think they think that the conversation is going to end, and it’s not,” K, a junior who would only reveal her first initial said. “We’re very clear that we’re going to keep pushing this issue.”