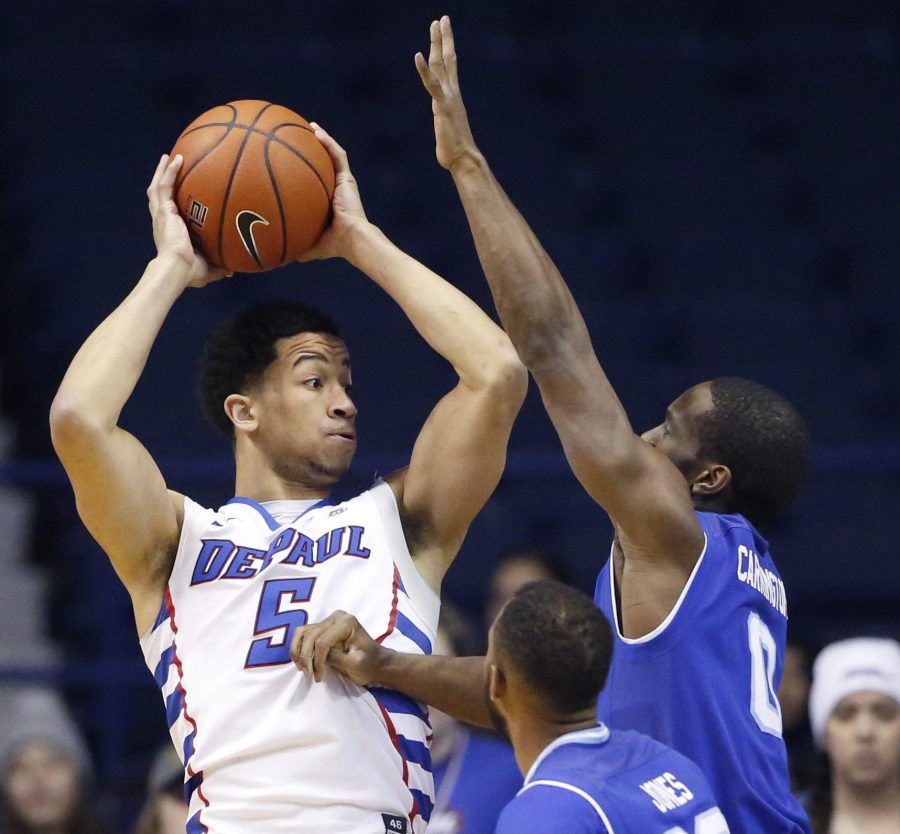 Coming off only their second conference win of the season on Wednesday, DePaul men’s basketball found themselves down by 20 in the second half. As they’ve had in multiple games this season, including Wednesday, DePaul came back. Sometimes they win, most time they get close.

On Saturday, they got close. Within one point in the final minute close. They couldn’t finish the job.

Another moral victory as they notched their 20th overall loss.

“There were a lot of games this year where we’ve had a positive ebb and flow to taking care of our business and today was another in a long line of those,” head coach Dave Leitao said. “One of my challenges is to figure out how to minimize that and continue to do that. We have to do a better job.”

“We keep fighting, we don’t give up,” Garrett said. “It also shows we’re not playing consistently enough to keep it close throughout the entire game or to give us an advantage. We started off well today but didn’t play well consistently to give ourselves a chance to win.”

The two teams stayed close throughout the majority of the first half as DePaul and Seton Hall traded the lead a couple of times. Tre’Darius McCallum was a catalyst behind this as he scored 13 points in the first half. Myles Powell had 13 points for the Pirates.

It wasn’t until the last few minutes of the half that the Pirates took advantage. They hit six of their last seven field goals as they opened up a ten-point lead. Seton Hall would settle for a eight-point advantage at the half as they led 35-27.

In the second half, Seton Hall exploded from their first half momentum to open the period. The Pirates went on a 14-4 run before the first media timeout to take a substantial lead. They were up by twenty at one point. The Pirates looked firmly in control.

“I thought our defense slipped enough in our coverages in the second half,” Leitao said. “We came and took a really good punch from (Seton Hall) and responded to getting down twenty by getting within one point at the end.”

DePaul started to come back. They started to hit shots, create turnovers and the Pirates started to miss shots. DePaul was able to get within five points with ten minutes to go before Seton Hall took the lead back to double digits going into the final minutes of the half.

DePaul kept it interesting, however, and made one final push. They cameback once again and got as close as possible when they were within one within the final minute. Garrett had hit a catch-and-shoot three in the corner to make it 77-76 with just 15 seconds ago Seton Hall had led 77-70.

Seton Hall still held on to win 82-79. The Pirates started hitting their free throws and then, down three with eight seconds to go, Garrett turned the ball over in the paint and DePaul lost their chance to tie it up.

“We have to grow from it” Leitao said. “We have to realize the good aspects of what that can bring to a young group and hopefully continue to fight so that these close games can come out in our favor more.”

Next up for DePaul is at Providence on Wednesday, then the final game at Allstate Arena, and the regular season, next Saturday when they take on Xavier.