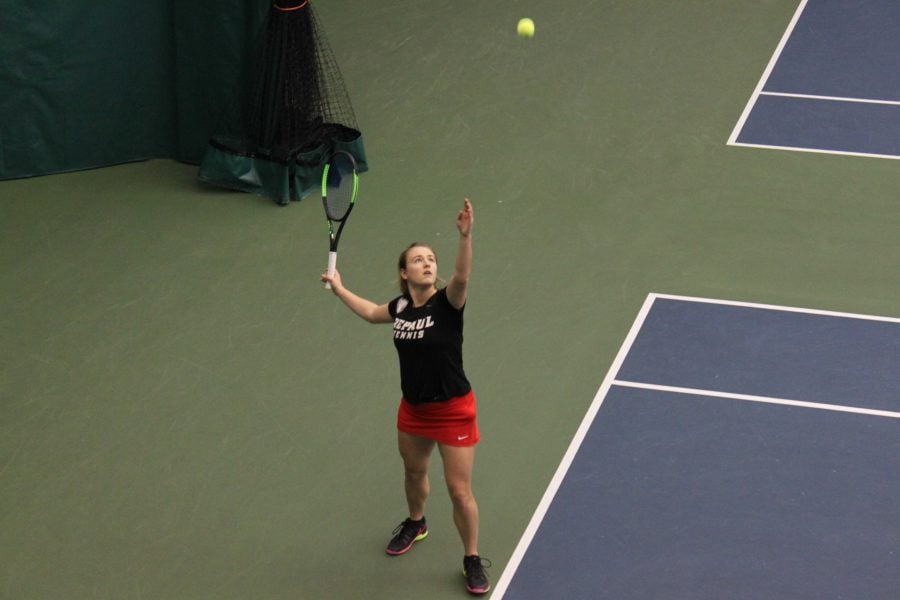 The Blue Demons managed to stop a two-game losing skid, and put the past behind them Sunday, as they defeated the Wildcats with great play against tough competition.

The DePaul women’s tennis team (5-6) defeated the Kansas State Wildcats (7-4) in a close game at home, 4-3. The most recent loss for DePaul was just one day prior, when they were shutout against Indiana University, 7-0.

Redemption was at hand inside the Lakeshore Sport and Fitness Center however, as effort became a winning formula.

These words rung true, as the final point was scored by DePaul Freshman Aspasia Avgeri, winning her singles match and the game for the Blue Demons. Avgeri defeated Maria Panaite 7-5, 1-6, 6-2.

“We tried to be aggressive,” Avgeri said, after the match. The aggressiveness payed off in the form of a win, 6-1, against Iva Bago and Livia Cirnu of Kansas State.

“We really tried to focus on making goals at the beginning,” Abbott said. “And doing the game plan we practice, like the ‘I formation’ that we’ve been working on together.”

This win for the Abbott and Avgeri tandem is one of only two doubles squads for DePaul that carry a perfect record. They are the only duo with a five-game win streak.

The final pair of Blue Demons, Patricia Lancranjan and Keisha Clousing, did not finish their doubles game, as DePaul took the first of seven available points.

The single matches competition started off in favor of the visiting opponents Kansas State. Ana Garcia-Navas(KST)defeated Vladutu 6-2, 6-2. This game was played alongside another match that swung toward Kansas State, as Mesquita found redemption in a singles match against DePaul Junior Keisha Clousing. Mesquita defeated Clousing 6-0, 6-2.

Clousing, coming off a thigh splints injury, is still getting back to game speed, “I was on crutches all last week, today’s my first day back,” Clousing said following the loss. “Yesterday I got to hit for thirty minutes but before that I hadn’t hit in a week, so today was day one.” Clousing went on to say that mentally she felt affected by the injury and recovery process, but fought hard to stay focused during play.

Shupenia took control of her match early, defeating Costamagna 6-0,6-3. Lancranjan kept it close in the second set, but defeated her opponent Millie Stretton 6-1, 6-4.

The third loss for the Blue Demons in singles play, before their victory, came from Abbott. Abbott fought hard in her matches, but was defeated by Livia Cirnu 6-4,6-4.

The game against the Kansas State Wildcats marks the 7th of 16 games before the Big East Championship run. “We are just fighting for the rankings,” says Tesic. “When you go to the Big East tournament that’s how they decide if you’re a no. 1 or no. 2 or 3.”

And while the tournament does not officially start till the end of April, DePaul will continue to press out of conference opponents soon.

The next games for the DePaul Blue Demons take place Saturday, Mar. 4 at Bradley (6-3) and Sunday, Mar. 5 at Eastern Illinois University (7-2).