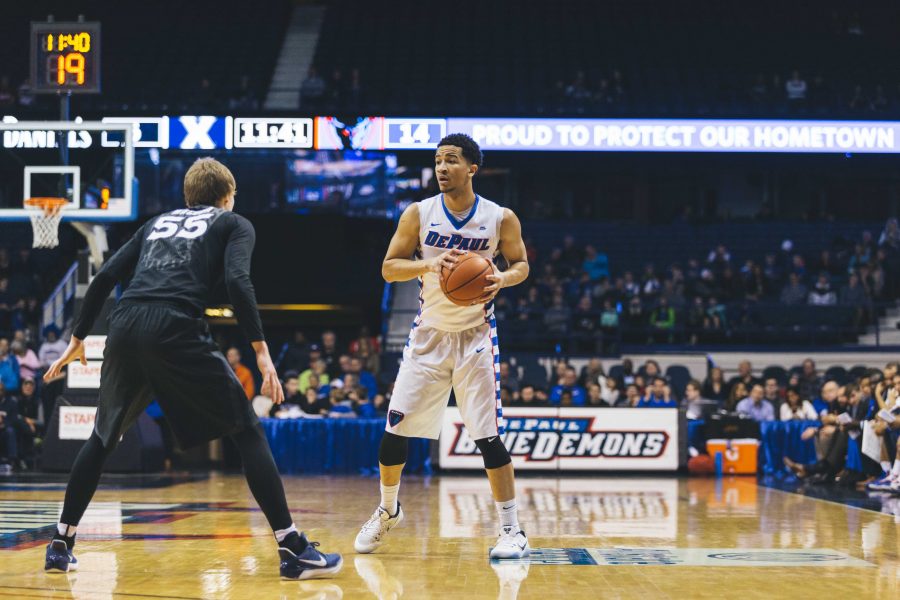 “You want to go out of the arena you’re playing in for the last time the right way and you want to give the seniors something to remember for the rest of their life,” head coach Dave Leitao said. “We weren’t able to do that.”

The Blue Demons (9-23, 2-16 Big East) opened the game with a nine-point run, holding Xavier (19-12, 9-9 Big East) scoreless through the first five minutes.  Eli Cain provided most of the production in the opening minutes, forcing turnovers and scoring both in the key and from behind the arch.

Billy Garrett Jr. found his first points of the game within the first eight minutes, dancing through the key for the bucket and a foul.  DePaul’s all-time leading free throw had no trouble completing the three-point-play.

“Billy Garrett Jr. has meant many more things than I could ever describe as an individual to (our) basketball program,” coach Leitao “His name will be in the conversation with all the greats who have come through this building.”

As the mid-point of the first half passed by, DePaul’s play was growing sloppy with double-dribble and traveling violations keeping the ball in Xavier’s hands. At the 6:45 mark, Quentin Goodin dropped a three-pointer to give Xavier their first lead of the game.

“We played defense pretty well for the first eight-to-ten minutes,” Billy Garrett Jr. said. “We need to maintain our defensive focus, our defensive consistency, and we got to talk and communicate better.”

DePaul found redemption with 4:04 to play, retaking the lead on a three-point dagger from Chris Harrison-Docks, but Xavier responded quickly, winning the final four minutes to enter the half leading 33-30.

Through the first 20 minutes, both teams were south of 40 percent from the floor, and the rebound margin was small.  Xavier found their edge in the turnover margin, taking advantage of a lack of discipline from the Blue Demons.

“We need to do a better job of attacking their zone,” Garrett said.

The second half scoring opened with Billy Garrett Jr.’s second three-point-play of the day to cancel the Blue Demon’s halftime deficit.  Two minutes later, the senior point guard hit a three-pointer to take the lead, but the momentum simply wasn’t mounting.

Chris Harrison-Docks buried a three-pointer and drew a foul around the five-minute mark for a four-point-play, once again hinting at a momentum shift that never came. Harrison-Docks ended with 11 points

Xavier continued to expand their lead, but they failed to push the scoring margin beyond eight points until the game passed the two-minute mark.  After that, DePaul’s hopes of winning their final game in Rosemont evaporated.

With 35 seconds to play, Billy Garrett Jr. walked off the floor at Allstate Arena for the final time to a standing ovation from DePaul fans.  He ended is senior day with a team-high 17 points.

Chris Harrison-Docks, R.J. Currington, Peter Ryckbosch, and Derrick Wood were all honored alongside Garrett during the pregame senior day acknowledgments.

“Those guys are like my brothers,” Garrett said. “I’ve seen them grow up; they’ve seen me grow up… it’s a beautiful thing when you can build a bond with your teammates.”

Saturday’s loss marks the 526th and final home game and the 37th season at Allstate Arena.

“I’ve had a lot of memories in this building and its gonna be sad to never play here again,” Garrett said. “(I had) flashbacks to my first game at DePaul, and even before that, sitting in the crowd right behind the bench when my dad was coaching here.”

The Blue Demon’s will face Xavier again on Wednesday in the opening round of the Big East Tournament at Madison Square Garden.