Student athletes get to work in service trip to Guatemala 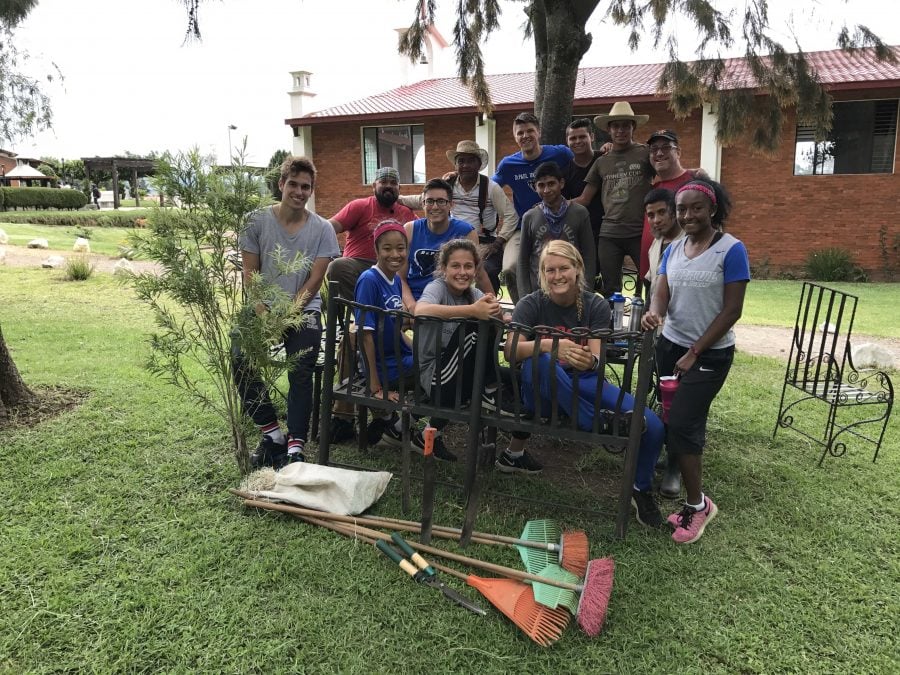 This summer, members of DePaul Athletics teamed up to complete a service trip in Parramos, Guatemala. Senior Joe Hanel led and organized the trip after being inspired to recreate an experience he had with an organization called Nuestros Pequeños Hermanos (NPH, Spanish for “Our Little Brothers and Sisters”) while he was in high school.

Having gone to Guatemala once before, Hanel wanted to share the lessons he learned there with other DePaul athletes. Students ranged in both academic year and sport — there were track and field athletes and basketball players. Hanel said that DePaul Athletics picked up the tab for much of the trip, which helped to make it possible in the first place.

“I really wanted to give student athletes here an opportunity to not only travel abroad but get that service aspect,” Hanel said. “We’re really busy here between school and sport. It’s like a full time job. Not a lot of us have time to get out and try other things and I thought this was a great opportunity.”

Hanel and eight other student athletes spent their week abroad in volunteer homes belonging to NPH. The organization takes in at-risk, orphaned youth ages three to 18 in Guatemala and eight other countries in Latin America, including Bolivia, Haiti and El Salvador. NPH’s website says they are “raising more than 3,200 orphaned, abandoned, and disadvantaged boys and girls” along with offering day school services, scholarships and meals to children in the greater community. At the NPH home in Guatemala, about 100 children are currently being served and they also have a special needs home that serves people living with disabilities.

“They give (the kids) a place to live and three meals a day. They give them an education, which is huge in Central America, so it’s a really unbelievable organization that’s making a huge difference down there,” Hanel said.

The team had a general routine each day: they’d wake up and have breakfast around 8 a.m. each day and then work on various projects around the home, which Hanel described as a large ranch, until about 1 p.m.

Their day would end around 4 or 5 p.m., when they would have dinner and then spend the rest of the evening spending time with the children of the home. Hanel said they enjoyed several games of soccer and basketball with the kids whenever they could. Sophomore Kelly Campbell added that the group played games of Uno every night, especially since the group spent so much time together and away from technology and social media as much as possible.

The group made sure that they were able to see and learn about Guatemala by visiting different locations across the southern part of the country. Campbell said that the group took two different excursions.

On a trip to Lake Atitlán,  a lake that sits in the in a volcanic crater in Panajachel, Campbell said that they met with a man named Juan who gave them information about how they were trying to preserve the wildlife and history of the lake before the group went to San Juan did some shopping and sightseeing.

Hanel said that something that was important for him was that each of the participants were able become educated about Guatemala.

“A really cool part of this trip was the speakers that were giving a lot of background on the country and the issues that they were facing so (everyone) could get a better picture of why NPH has to exist, why these kids need help, and why there’s so much poverty in Guatemala,” Hanel said. Hanel and Campbell both said that they would be interested in making the trip a tradition for DePaul student athletes. Campbell said that they’d like to continue to grow the relationships that they have with the children in NPH’s Parramos home, but they would be open to working with NPH in different countries as well.

“Service doesn’t have to be this grand gesture of going to a third world country. We’re hoping that the nine of us can come back here to Chicago and get three of our friends to do something. That’s 27 people and we can do so much.”