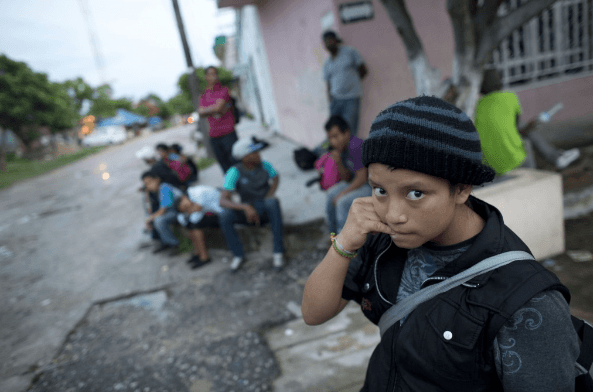 A 14-year-old Guatemalan girl traveling alone waits for a northbound freight train along with other Central American migrants, in Arriaga, Chiapas state, Mexico. More than 52,000 unaccompanied children have been apprehended since October. (AP Exchange)

Amid another year of bipartisan bickering over America’s immigration policy, a new challenge has come across: the spate of unaccompanied children who have illegally crossed the Mexico/US border.

Since October 2013, more than 52 thousand children have been caught crossing the border, according to US Customs and Border Protection. 10,664 of these people were apprehended within June alone. This is in contrast to only 15,700 children three years earlier. An untold additional number of unsupervised children have gone uncaught, prompting questions over how the US should handle this impending crisis.

Notably, many of these children do not originally hail from Mexico. Rather, much of the recent flow of migrant children originates from Central American nations – 15,000 of these migrants hail from Honduras alone, a figure five times greater than that of 2012.

“These children are getting here because it’s a business,” Democrat Senator Jack Reed said in reference to the people-smugglers who have brought many across the border. “Pretty hard-nosed people, we have to take them out of business.

The Obama administration has so far struggled to keep up with the spate of child crossings, and on Tuesday, July 8, Obama traveled to the border and appealed for Congress to grant an additional $3.7 billion in emergency funding to help deal with the situation.

The funds would largely be utilized for detainment, preventative or deportation measures, such as the hiring of more detention officers, the construction of larger and more hospitable detention facilities, and the increase of surveillance along the US’s southern border. Detention facilities along the border have recently suffered from overcrowding.

Criticism of this response has ensued from all sides of the political spectrum. Some Democrats and many Latino advocacy groups have criticized these measures for being inhumane. Conversely, many Republicans have claimed that the problem has stemmed from lax enforcement of immigration policy that incentivizes illegal migration, and that the proposed spending doesn’t go far enough in further deterrence or deportation.

“[Spending for detention centers], I think, is what the American people don’t like to see, because they know that that is not deterrence,” claimed Bob Goodlatte, a Republican Senator and the House Judiciary Committe Chairman. “And that will result in even more people coming into the country.”

Central American officials have proposed their own differing solutions to the crisis as well.

“It’s much more practical for the United States to launch a mini-Marshall plan, as they did after World War Two, to create opportunities and really get to the root of the problem in Central American countries that is fueling migration,” Mireya Aguero, the foreign minister for Honduras, said in a conference with US lawmakers on Wednesday, July 16.

Currently, illegal migrant children from Central American countries are given a lengthy court process to determine whether they should be deported. Children from the bordering countries of Mexico or Canada are, on the other hand, not legally guaranteed to a hearing, and their fate lies in the screening process of Border Patrol agents, who have the right to freely send minors back without trial unless they determine that these minors have a danger or fear of their home nation that merits additional deliberate over their right to migrate to the US.

Recently there has been a push to legally treat child migrants from all nations in the same way that Mexican or Canadian migrants are treated, as this would speed up the process of deportation from the US and decrease the burden on overcrowded detention centers. A bill to accomplish this was introduced by Texas lawmakers Monday, July 25.

The recent influx of minors has been blamed by many officials as the result of a recent uptick of instability in Central American countries. Much of the illegal drug trade is now centered around Central America as Mexico and Colombia continue to successfully crack down on drug cartel operations; this has been seen as exacerbating hardship for people in these nations. Many of these children undertook arduous and oft dangerous journeys in order to escape perilous situations at home, such as recruitment by gangs or parents’ death from drug-related violence. Honduras currently boasts the worlds highest murder rate, and Belize, El Salvador, and Guatemala rank in the top ten in the world, according to the United Nations Office on Drugs and Crime

“It’s a problem related to what happens to children when they are caught in environments in which the breakdown of state authority and the presence of gangs in communities and controlling the communities puts these children at risk,” US Ambassador Thomas Shannon said.

According to numerous eyewitness testimonials and interviews with migrants, however, this recent influx may also be largely due to a false rumor that Obama has created a “permit” for children to stay in the United States, provided that they safely cross the border.

The Economist reports that the logic behind this type of rumor may be somewhat backed when observing recent immigration policy. “America deported 370,000 people in fiscal 2013, a huge increase on earlier years. Yet since there are an estimated 11.7 million illegal immigrants in America, even a deportation machine running at high speed must be selective. The Immigration and Customs Enforcement agency prioritizes the removal of adults with criminal records rather than children with none.”

Various officials have accepted this explanation to differing degrees;  Honduran President Juan Orlando Hernandez has cited this as one of many factors that has led to this uptick in child migration, along with other factors such as the US’s inability to properly control its nationwide drug consumption.

The child migration crisis has indeed proven to be a complex issue in both cause and scope, and  Washington will likely remain under close scrutiny throughout the upcoming months over their ability to tackle the situation in an effective and humane manner.