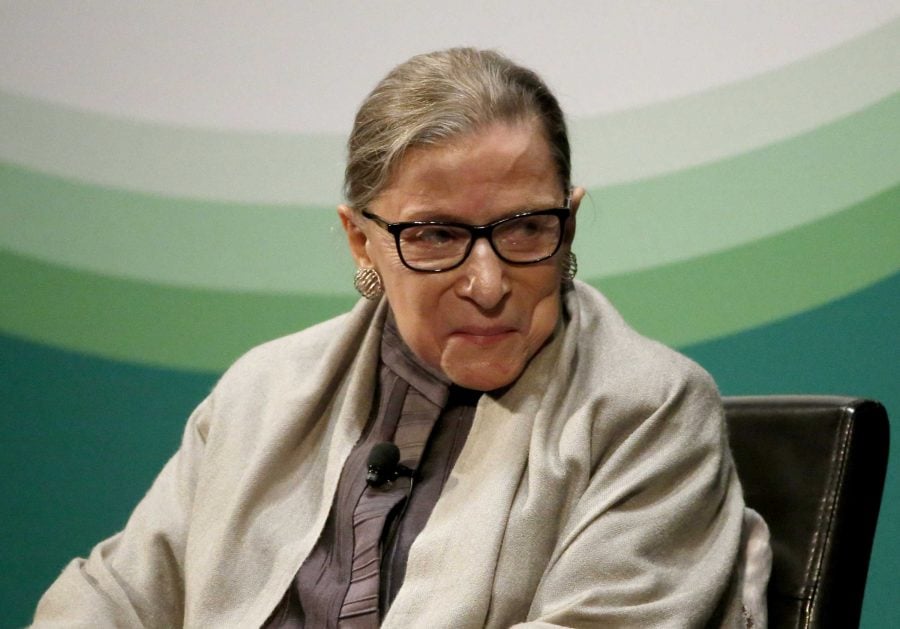 U.S. Supreme Court Justice Ruth Bader Ginsburg listens as she participates in a conversation with Judge Ann Claire Williams of the U.S. Court of Appeals for the Seventh Circuit at Roosevelt University Monday, Sept. 11, 2017, in Chicago. (AP Photo/Charles Rex Arbogast)

Supreme Court Justice Ruth Bader Ginsburg appeared at the Auditorium Theatre of Roosevelt University to speak at the college’s Second Annual American Dream Reconsidered Conference Monday, Sept. 11. Ginsburg was asked to kick off the conference by talking about her life and the different social justice initiatives she has taken on in the U.S.

Before the 84-year-old justice took the stage, Roosevelt University’s president Ali Malekzadeh came out for an introductory speech, discussing the conference’s goal of examining issues that are most important to the country and referencing Ginsburg’s spot as a “popular culture icon.”

Ginsburg, who was appointed to the Supreme Court by former president Bill Clinton in 1993, sat down with 7th U.S. Court of Appeals Judge Ann Claire Williams at the sold-out event to discuss everything from her family to life as a Supreme Court justice, with eruptions of laughter and cheers from the audience along the way.

Williams and Ginsburg started out by talking about her early life and her love for learning. Ginsburg took a job as a teacher because it was a “safe job” for a woman in the 1960s, but she knew she wanted more. Her husband Marty soon joined the military and Ginsburg became pregnant with her daughter, Jane. Ginsburg reflected on when she had to hide her pregnancy in  fear she would be fired if it was discovered.

Ginsburg went on to talk about her struggles as a woman in law school. She was reminded of something her father-in-law had told her when she was struggling with whether or not she could make it through law school with a toddler in tow, saying he told her, “if I really want this, and the answer is yes, you find a way.”

Freshman Lizzie LaChapelle was profoundly influenced by her triumphs as a woman.

“Ginsburg is an inspiration for women everywhere,” LaChapelle said. “Her policies and her grit have positively influenced the American landscape.”

Ginsburg talked extensively about the differences of being a woman in law from when she was in school to now, reminding everyone that while the doors were now open there was still discrimination to deal with, but that it doesn’t mean it’s not worth fighting against.

Ginsburg was a professor at Rutgers Law School from 1963 to 1972. The ACLU chapter in Newark, New Jersey asked Ginsburg to help them fight a number of gender equality cases for them. Ginsburg and the ACLU took on, and won, a number of different cases, including five that were argued in front of the Supreme Court. The ACLU then decided it was time to create a Women’s Rights Project, which Ginsburg was the co-director of.

Ginsburg recalled a time when she was a law professor at Columbia Law School and a coworker had come to her after finding out 25 maids had been laid off while all of the janitors managed to keep their jobs. Ginsburg said the coworker came up to her and asked, “what are you going to do, Ruth?” Eventually, the union that protected the janitors saw potential in also taking the maids under their union protection, so Columbia admitted fault and hired the maids back.

As Ginsburg discussed many different cases she had worked on over the years, the audience could still hear the emotion and hurt she carried with her from each of case, especially the 1971 case Reed v. Reed  where a mother had lost her son to a suicide and was denied the right to his estate, even though she only wanted his items for sentimental value.

Williams talked to Ginsburg about the recent nomination of Justice Neil Gorsuch and the fight between Republicans and Democrats for the successor of the late Justice Antonin Scalia. Ginsburg talked about how “dangerous” it was for there to be party lines in a decision about the judiciary system, then said that in her lifetime she hopes to see Congress “get over this nonsense,” which elicited 20 seconds worth of applause and cheers from the audience.

Senior Jimmy Schmitz feels  that  political polarization has taken over in the Supreme Court and takes issue with her left-leaning bias.

Williams brought up Ginsburg’s place as a pop culture icon, referencing her nickname, “Notorious R.B.G,” which references the late rapper The Notorious B.I.G. Ginsburg laughed as she reminded the audience that they were “both born and bred in Brooklyn, New York.”

At the end, Ginsburg was asked by Williams when she planned to give up her seat on the Supreme Court, to which Ginsburg responded by saying that if there is still work to be done, “I will remain to do it, as long as I can, full steam.”