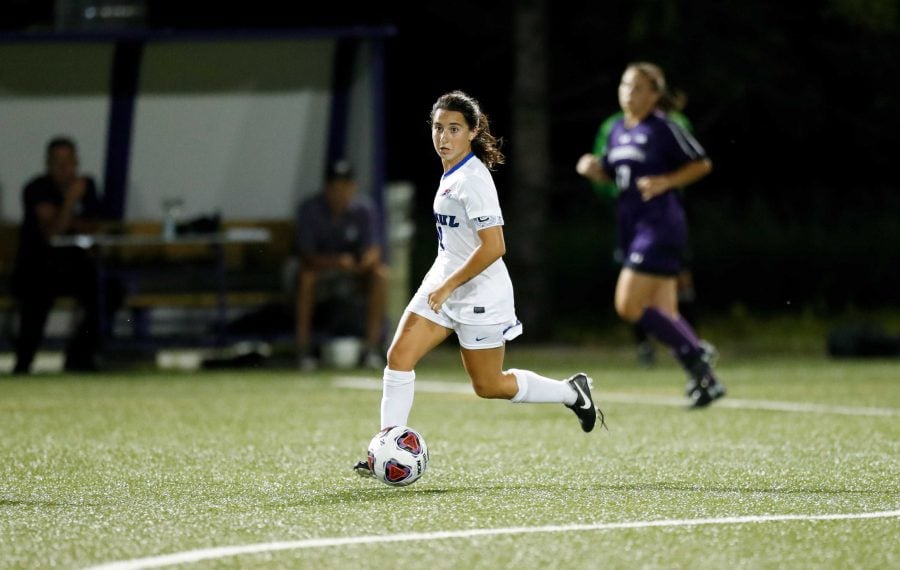 On a comfortably warm September Sunday, the DePaul women’s soccer team tore apart the Tribe of William and Mary 4-0, drawing their record to 4-4 and leading them to their last game of the non-conference schedule.  After their match against Loyola, it will be on to competing in one of the tougher soccer conferences in the NCAA.  This season, the Big East features two teams in the top 25 (United Soccer Coaches Poll) and one more receiving votes.  To defend their share of the regular season Big East title, the team will need to play its best.

The best way to prepare for tough teams is to play tough teams, something head coach Erin Chastain was sure to work into the schedule.

“We put together a tough opening portion of our schedule and have been battle-tested along the way,” said coach Chastain in an interview with DePaul Athletics.

DePaul opened its season against Northwestern, ranked 23 at the time, and fell 1-0.  Senior Alexa Ben, coming off a Big East Midfielder of the Year season, knew there was something to take away from the loss.

The Demons dropped the next game to Illinois before competing in the Loyola Invitational.  Here, DePaul began to flex its offensive muscles as they outscored their opponents 8-0 over two games and captured the championship.  Ben scored three goals and was named as the MVP for her efforts.

Following the invitational, it was on to Purdue, where the Boilermakers won the day 2-0. After that loss, DePaul faced their toughest opponent of the non-conference schedule, 12 ranked Texas A&M.  DePaul was strong in the first half, holding the Aggies scoreless, but faltered in the second and lost 2-0.

“We played very disciplined against a top-15 program,” coach Chastain told DePaul Athletics. “We had some great chances, including our first play of the match, and kept things tight in the first half.

DePaul had one last chance for a high-profile win when it faced Pepperdine (receiving votes) after the loss to A&M.  Two minutes before the end of the first half, freshman forward Morgan Turner intercepted a pass and fired home the first goal of her young collegiate career.  That goal would end up securing the DePaul victory as they upset Pepperdine 1-0.

“The goal definitely gave me some confidence and Pepperdine is a really good team,” Turner said. “Especially offensively we have been playing really well the last couple of games and getting some great goals, so I think we can keep playing how we have been the next couple of games.”

Senior Alexa Ben has her own strategy for the next games against Big East competition and it all starts with practice. Insert Allen Iverson joke here.

“First starting off with practice, the intensity of practices.  And that comes from everyone on our team, especially us (seniors),” Ben said.  “And then each game we have to treat it like it’s a Big East conference game and we can’t take any plays off.”

Coming out of Wayzata High School in Plymouth, Minnesota, Turner has played in seven out of eight games for the Blue Demons. Along with her goal she has eight shots, an assist and leads all freshman with three points. She needs to be at the top of her game in the following games, but as the goal shows, she has been adjusting rapidly.

“The speed of the game is definitely faster and everyone is a lot stronger so it has definitely been an adjustment,” Turner said.  “But I’m starting to learn how to play with the team and I think we are all definitely figuring out how to play well together.”

DePaul has featured two other freshmen heavily.  Defender Jackie Batliner has appeared in all eight games and forward Jade Eriksen-Russo has appeared in five, with a goal to her name as well.  Ben is one of seven seniors on the team.  As a tight nit group, Ben knows the seniors must show the younger players what it takes to compete if they hope to end this season where they want to.

“We’ve done well the past three years in the Big East. We just have to use that motivation and use last year as a learning point where we don’t want to be co-champions, we want to be the sole, outright Big East champs,” Ben said. “And as seniors this is our last hoorah and we want to make it a special year.”

They will have their work cut out for them as their second Big East game will be against 19 ranked Georgetown.  The Hoyas are 5-2-1 this season, with their losses coming against number 6 West Virginia and number 2 Stanford.  The tie was against Rutgers, who is ranked 13, higher than any team DePaul has faced currently resides as A&M fell to 22.

In the final non-conference game of the year, the Blue Demons snapped their two-game winning streak with a 2-0 loss to cross-town rival Loyola on Sunday Sept. 17.

Now it is on to look for that special ending.