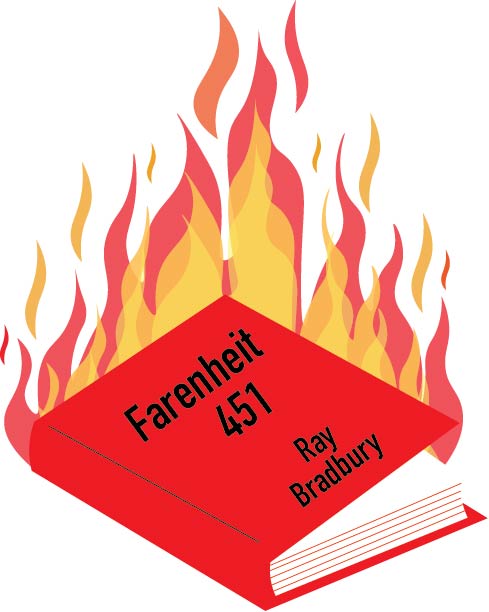 Words have power. The DePaul University Library and University Center for Writing-based Learning (UCWbL) wants to remind the DePaul community of  this week as it rings in the 35th year of the nationally recognized Banned Books Week.

An attention-getting name for the week, Banned Books Week celebrates peoples’ freedoms to read and conveys the dangers of censorship academic and public libraries continue to face.

One person in charge of coordinating the week, University Library Coordinator Heather Jagman, said the week is designed to “prompt readers to think” and “remind people that attempts to remove or ban materials from libraries and school curriculums still happens.”

While DePaul sophomore Nora Lewis wasn’t aware of the upcoming Banned Books Week or the events to be hosted on Depaul’s campus, she and her friends were familiar with the concept of banned and challenged books.

They referenced one high school classic known for being particularly controversial among popularly challenged books: Harper Lee’s 1960 classic “To Kill A Mockingbird.”

When Lewis’ teacher had them read the novel in high school, he didn’t leave the use of the n-word or references to slavery out.

“He said he wasn’t condoning them,” Lewis said, “but it was part of the literature.”

Lewis’ friend Maria Kalantzis from North Central College agreed and said it’s important to not censor books like “To Kill A Mockingbird,” even in younger grades because “books are a way to start a conversation in a controlled space.”

“Those were different times,” Jagman said. “That’s how racist people talked. We want to make people aware of that. I think most students can understand why the language is there.”

While older classics like Mark Twain’s “The Adventures of Huckleberry Finn” and “ The Adventures of Tom Sawyer” are often in line with Lee’s novel and thought to be among popularly controversial books, more recent lists for challenged books, or those titles which people file a complaint for existing in an academic or public library, contain a different theme.

Sex, religion and a non-conforming identity – if a young adult book’s content included one of these, there’s a good chance it was among the 598 challenged books recorded by the Office for Intellectual Freedom between 2015 and 2016.

Titles with LGBT characters comprised six of the 20 most challenged books in the two years. Two of them, “I Am Jazz” by Jessica Herthel and Jazz Jennings and “Two Boys Kissing” by David Levithan, made the top ten both years. Among the rest, reasons for challenges include: “sexually explicit,” “profanity,” “drug usage,” “unsuitable for age group,” and “religious viewpoint,” among others.

Jagman understands some parents might not want to expose their children to specific content, but as a librarian herself, expects parents to be able to control what their children are reading.

“There’s a concern on behalf of people who write these challenges that these books will have undue influence on the readers and give them ideas,” Jagman said. “But you know, it’s being aware of people who exist. These people exist in the world and censoring a book isn’t necessarily going to prevent your child from being aware of this.”

On Sept. 25, information tables on the 11th floor of the DePaul Cener in the Loop, and Sept. 26 at the Lincoln Park Student Center will provide information on different banned books as well as material to make buttons. Students are also encouraged to share which book gives them power.

That’s what Jagman and the Outreach Coordinator from the UCWbL Jennifer Finstrom wants to ask students this year.

“We are celebrating our right to read, our right to freedom of information and our right to ideas… it’s very important that people have access to ideas,” Finstrom said.

As the outreach coordinator from UCWbL, which includes the Writing Center, Finstrom feels passionately about both writing and reading.

“We feel very strongly in advocating for writers and at the same time we want to advocate for readers. We don’t really feel you can be a writer without being a reader,” she said.

The two women in charge of coordinating Banned Books Week shared which previously banned or challenged books have given them power. For Jagman, it was “A Wrinkle in Time” by Madeleine L’Engle, which she read a number of times growing up.

“It helped me see there are many different ways to be a girl in the world,” Jagman said.

For Finstrom, Kate Chopin’s “The Awakening” came to mind.

“It deals with important questions of being an independent woman and making choices,” Finstrom said.

On Thursday, Sept. 28, Banned Books Week will continue on the 2nd floor of the John T. Richardson Library with a “read in.” Students can bring their own banned book or explore from the library’s collection.

To finish off the Banned Books Week celebration, City Lit Theater will present: Books on the Chopping Block where the theater group will perform readings from the ten most challenged books in 2016. The event will take place in room 115 of the John T. Richardson Library.