Soft melodies shine in Phoebe Bridgers’ “Stranger in the Alps” 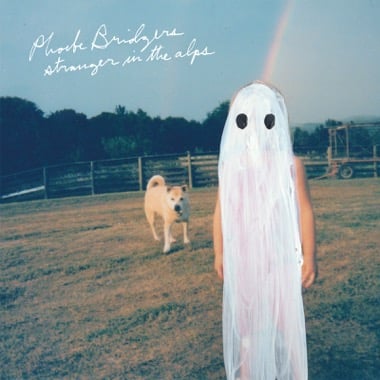 “Stranger in the Alps” is Bridgers’ first full-length LP that was released on Sept. 22.

Musician Phoebe Bridgers has surrounded herself with experts of sad songs like Ryan Adams, Julien Baker and Conor Oberst, so it’s no surprise that her new album is a superb collection of songs that will rip your heart out. “Stranger In The Alps,” the debut LP from the 22-year-old singer-songwriter, is filled with personal lyrics sung in hushed tones over soft melodies. These songs have been bouncing around Bridgers’ head for years, and now they are out in the wild to ruminate in our own.

Coming from California, Bridgers has been involved in music since she was young, writing her first songs as a teenager and playing in punk bands in her local DIY scene. One day in 2015, a mutual friend introduced her to Adams and the pair immediately hit it off, taking a trip to Adams’ Pax-Am studio in Los Angeles to record what would turn into Bridgers’ debut release, the three-song EP “Killer.” It’s Bridgers at her most vulnerable, stripped down to just her voice and her guitar as she sings about lost love, depression, and obsessions with serial killers.

Two songs from “Killer,” the title track and “Georgia,” are carried over to make up two of the 10 tracks on Bridgers’ debut LP. “Stranger In The Alps,” named after a censored version of a line from “The Big Lebowski,” showcases a young artist introducing herself to the world with a very promising start. Album opener “Smoke Signals” paints a picture of a trip into isolation, hiding out from life and mourning lost heroes, while “Chelsea” offers up a new interpretation of the relationship between Sex Pistol Sid Vicious and Nancy Spugen. The single “Motion Sickness” throws jabs at an ex-love who fakes an English accent while singing, while “Scott Street” retells the sad catching-up between two ex-lovers who bump into each other on the street.

These songs are similar to the EP in that the focus is on Bridgers’ voice and her guitar, but the album also introduces new elements into the fold. Sporadic keyboard melodies and brief guitar lines that sound like they’re right out of “Twin Peaks” pop up throughout the album, and “Funeral,” a heartbreaking tale of one’s struggle versus the struggle of others, begins with harsh feedback and noise before falling down into a soft fingerpicking pattern.

While these songs detail Bridgers’ personal sadness, she also pays tribute to her heroes. She sings of David Bowie and Lemmy Kilmister while Oberst and John Doe of the punk band “X” guest appearances on “Would You Rather” and “Killer” respectively. The album closes with a cover of “You Missed My Heart” by Mark Kozelek and Jimmy Lavelle, which Bridgers reimagines as a quiet piano ballad. As Bridgers runs through the awful deeds the song’s narrator has done before they reach their eventual peril, the sense of heart-wrenching loss is driven home further and further.

By the time the album ends, you’re left sitting there in the dark, devastated by every lyric and every melody from this young woman’s diary of thoughts. Even still, you can’t help standing up to flip the record over for another listen. Despite the deep sadness running through her work, Bridgers keeps you coming back for more.