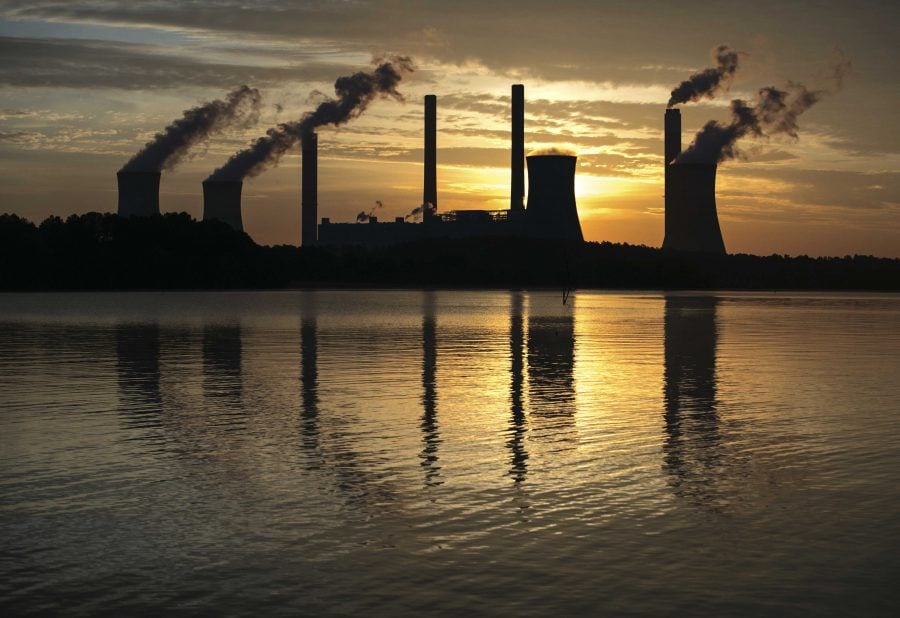 Technology now in limited use removes about 90 percent of carbon dioxide from the smokestacks of coal-fired power plants, but energy experts say cost remains the chief obstacle to bringing the “clean coal” touted by President Donald Trump into the mainstream. (Brandon Camp/The Associated Press)

In an effort to roll back policies from former President Barack Obama’s administration, Scott Pruitt, administrator of the Environmental Protection Agency (EPA), announced last week that the Clean Power Plan (CPP) would be repealed. The EPA  is arguing that the plan exceeded the agency’s governing power given by Congress.

The CPP, which was introduced in June 2014  and aimed to reduce and regulate greenhouse gas emissions from coal-fired power plants, had yet to be implemented and has been on hold with the U.S. Supreme Court.

Phillip Gonet, president of the Illinois Coal Association, said he was in favor of the repeal because the CPP would have a negligible impact on energy costs to the consumer.

“We already have stringent rules, and they’re working,” Gonet said.

Gonet cited the EPA’s  Mercury and Air Toxic Standards (MATS), implemented in 2011 under the Clean Air Act, as a successful rule of setting standards to limit toxic air pollutants by coal-fired plants. Gonet said Illinois coal is unique in that it has a high sulfur content, meaning power plants that are burning Illinois coal must have specific tools to clean the air based on set standards by the MATS rule.

The U.S. is the third largest producer of coal in the world, falling behind China and India, according to data released this year from the International Energy Agency (IEA). The IEA also reports globally that 40 percent of electricity is produced by coal-fired plants and 70 percent of the carbon dioxide emissions are generated from these plants.

Gonet said with the repeal by the EPA., the coal industry in Illinois may have a boost in jobs and opportunity to gain a larger share of coal sales domestically and abroad.

Although Illinois is the third largest producer of coal, it is second for most coal received by other states, according to the U.S. Energy Information Administration’s second quarter coal distribution report for 2017.

Mark Potosnak, a professor in the Environmental Science and Studies department, said the right incentives for reducing carbon and greenhouse gas emissions need to be in place.

“Let’s be realistic, getting rid of this legislation isn’t helping,” Potosnak said of the repeal of the CPP.

Potosnak said the economics of renewable energy sources like wind, solar and nuclear have improved and are becoming more cost effective.

“Even before the Clean Power Plan was put out there, there was already a switch to shut down coal-fired plants,” Potosnak said. In Chicago, Midwest Generation closed the last of the city’s coal-powered plants, Fisk and Crawford, in 2012.

Earlier this year, President Donald Trump announced he would withdraw the United States from the Paris Agreement, which was ratified by Obama in 2016 but had not been ratified by Congress. The Paris Agreement’s central aim has been to strengthen the global response to the threat of climate change, according to the United Nation’s  website.

In a press release after Trump’s statement, Chicago’s mayor Rahm Emanuel said that the withdrawal from the Paris Agreement was alarming,

“From reducing our energy use to expanding public transit, Chicago will not skirt our responsibility to act,” Emanuel said. “We will work with cities around the country to reduce our emissions in accordance with the Paris Agreement, and urge President Trump to keep our nation’s commitment as well.”

Potosnak said the Paris Agreement and CPP are separate issues but related.

“It sends a signal to other countries that we don’t care about emissions,” Potosnak said.

Mariah Schultz, a senior dramaturgy/criticism major, said it’s disappointing to see the Trump Administration  pulling away from legislation like CPP and not finding solutions to issues like health care and the environment.

“It seems very odd in 2017 to be taking those steps backward,” Schultz said.