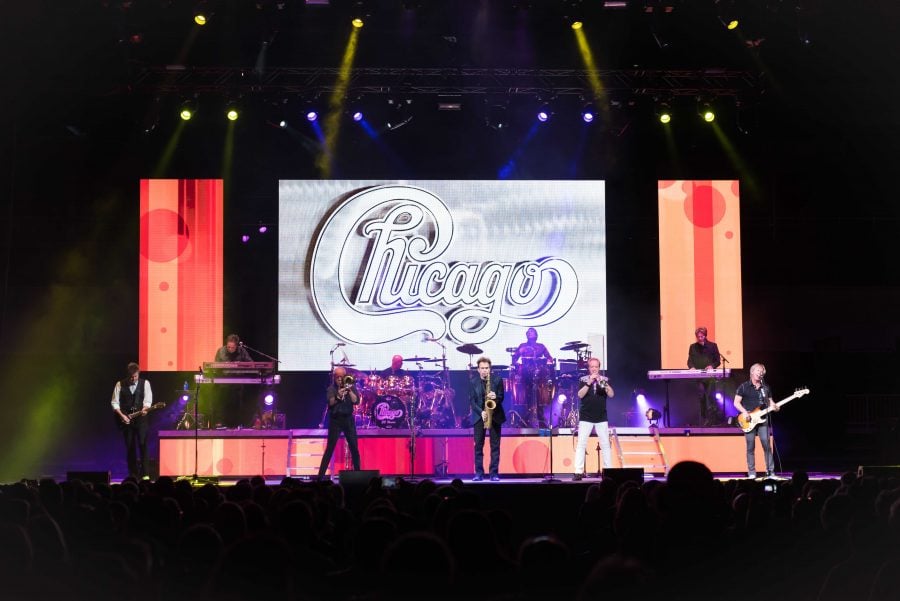 Chicago performing at the new Wintrust Arena on Nov. 9. Lee Loughnane, James Pankow and Walter Parazaider of Chicago formed in the 1960's on the Lincoln Park (Konrad Markowski/The DePaulia)

Only a few weeks after Bob Dylan hit the Wintrust Arena stage, the band Chicago gave the crowd a performance including all their best hits. The American rock band performed at the new Wintrust Arena Thursday Nov. 9 as apart of a DePaul University benefit concert.

The all-male group, which started in the late 1960s on DePaul’s Lincoln Park Campus is one of the world’s most popular bands and was inducted into the Rock & Roll Hall of Fame just last year. There were nine performers on stage, three of whom are DePaul alumni including Lee Loughnane, James Pankow, and Walter Parazaider.

Chicago and DePaul hosted the benefit concert not only to celebrate the opening of the Wintrust Arena but to also help fund DePaul’s School of Music and Athletics Department.

The brand new Blue Demon arena is pristine, and founding member and keyboardist of Chicago, Robert Lamm, agrees. “What a beautiful facility,” the south side native stated after the second song. Lamm moved from Brooklyn to Chicago when he was 15.

“We have been relearning these songs that we wrote and recorded over 40 years ago,” Lamm explained before he promised the crowd that they would hear all the songs they came to the show for; all the greatest hits.

The show was a clear representation of the band’s ’70s roots. The swanky rock-blues songs were being matched with big band flares per usual. There were also colorful, psychedelic images being displayed behind them that added a level of ’70s youth to their set. Among these images were swirling flowers and rays of light that moved across the giant screens, always leading back to the display of their logo.

There were many instruments on stage, creating the perfect mixture of woodwind and string melodies. One prominent woodwind musician on stage being alumni Pankow on the trombone. Pankow performed solos during the set that were matched with cheers and dancing in the half-filled Wintrust Arena.

Pankow was visibly excited to be on the Wintrust stage and in his hometown. He was the most active, moving around and grooving with the music and reminiscing on the old days. At one point, Pankow even addressed the audience asking them to imagine that it was 1970 again. Pankow stated that the band at that time was “bona fide gypsies,” writing songs and living on the road.

Moving forward with the show, the band continuously switched up who was performing vocals and smoothly transitioned from one song to the next. This aspect is a clear reminder that practice makes perfect in the music industry, and Chicago has definitely been performing for a long time. The band member’s individual skills provided perfectly timed and tuned instrumentals and fast tempo changes.

It was truly a treat hearing a band perform that is known for altering the traditional sound of rock and roll due to the added horns on stage. Although the music was strong, their performance style was outdated and did take away from the songs.

The displays in the background eventually took a turn when the band began to play in front of couples walking through fields and people spinning in the sunlight. The set displayed behind Chicago featured flowers and other different forms of color schemes that sometimes distanced the visuals from the music. In addition to the design, the echoic sound quality in the very new Wintrust Arena showed that it was definitely built for basketball games and not live music.

However, the performance was one that meant a lot to the band and the DePaul community. The long-term performing career of Chicago has engrained the rock star lifestyle into them. It’s amazing to see that through the years the band still recognizes DePaul University as a part of their musical roots.