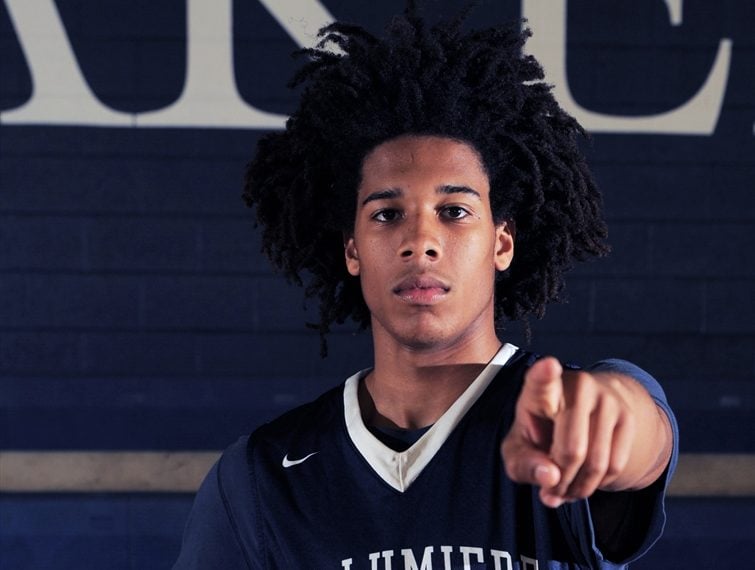 Tyger has taken official visits to Purdue and DePaul this year. (Photo courtesy of Max Preps)

With Lincoln Park Zoo planning to relocate their tigers, the tiger population in Chicago could soon be zero.

But will the Tyger population in Chicago increase by one after this weekend?

Former DePaul Blue Demon commit Tyger Campbell was in town this weekend on an official visit, attending the Blue Demon’s 72-58 loss to the Notre Dame Fighting Irish in the first-ever regular-season game at Wintrust Arena.

He sat in a section behind DePaul’s bench with some of his current La Lumiere School teammates and made an appearance on the “hug cam” with his mother. At one point, a lone fan in the student section even began a “We Want Tyger” chant, although his efforts to enlist the help of his teammates were futile.

The 6-foot point guard originally from Des Moines, Iowa is a four-star recruit that ESPN.com rated as the 72nd-best prospect in the class of 2018.

After verbally committing to DePaul last spring, Campbell reopened his recruitment on Sept. 1.

“First off, I would like to thank DePaul University and the city of Chicago for their show of love and belief in me,” Campbell wrote in a screenshotted message that he posted on Twitter on Sept. 1. “After great consideration and with the full support of my family, I have decided to open my college recruitment effective September 1st. I am thankful to all the coaches, colleges, friends, and family that have stood by me during this journey. I am ready to embark fully into this process and make a well informed decision on where I will attend college.”

Campbell attended the Blue Demon’s open practice at Wintrust Arena on Oct. 14, but was coy when asked what schools are on his radar for the second round of his recruitment. He also took an official visit to Purdue on Oct. 21.

He’s received offers from Michigan State, Illinois, Tennessee, and Alabama among other schools, but Purdue and DePaul are widely regarded as the most likely destinations for the prized recruit.

The early signing period for high schoolers to ink a national letter of intent to the school of their choice ends on Nov. 15.

Two recruits, both of whom had already verbally committed to DePaul, signed national letters of intent today officializing their commitment to play for the DePaul basketball team next season.

Cedarburg, Wis. shooting guard John Diener verbally committed to the Blue Demons in May of 2016 and made this verbal commitment official by signing his national letter of intent on Wednesday. The 6-foot-3-inch guard is a three-star recruit according to 24/7 Sports and considered offers from the University of Wisconsin-Green Bay and the University of Wisconsin-Milwaukee before ultimately picking DePaul.

In his junior season of high school, Diener broke the all-time career scoring record at Cedarburg High School with 1,529 points. He averaged 21.6 points per game during that regular season.

Ukrainian-born power forward George Maslennikov also signed with the Blue Demons on Wednesday. The two-star recruit announced his decision to become a Blue Demon in a screenshotted message on his Twitter account on Oct. 9.

The 6-foot-9-inch power forward played for the Atlanta Express which is an Under Armour sponsored travel team based in Atlanta. He goes to school at Holy Spirit Preparatory School in Atlanta and helped the school capture its first state championship in basketball in March.

Both Diener and Maslennikov are on scholarship for DePaul.

After verbally committing to DePaul last spring, Campbell reopened his recruitment on Sept. 1. Since then, he has taken an official visit to Purdue.

DePaul will have to remain in suspense as four-star born big man Bryan Penn-Johnson continues to mull his college decision. According to Rivals.com writer Eric Bossi, the Las Vegas born Penn-Johnson won’t make a college decision during the early signing period as he continues to decide between DePaul, University of Washington, and University of California, Los Angeles. Penn-Johnson made an official visit to DePaul on Oct. 14 on the same day of the open practice and intersquad scrimmage.

Wednesday marked the beginning of the early signing period for college basketball recruits. This period ends on Nov. 15.