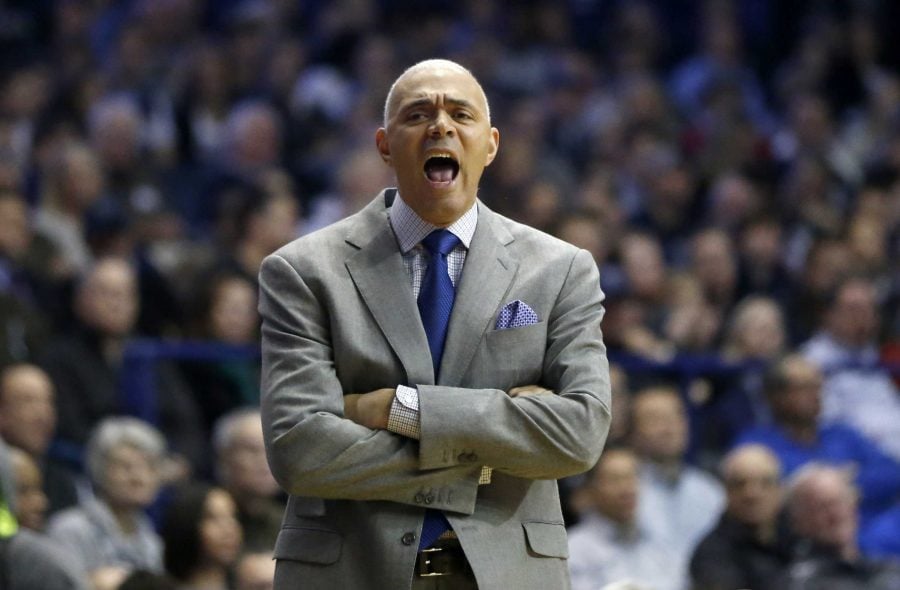 There’s something about a college basketball rivalry game in Chicago that creates a palpable excitement that permeates throughout the city.
“I’m not from here, but we can feel the vibes,” DePaul Blue Demon junior guard Eli Cain said. “We want to have the city to ourselves. There’s a lot of other good teams, but we want to show people that we’re the best.”
After a 80-64 road loss last year at the hands of the Northwestern Wildcats (7-4), the surging DePaul Blue Demons (6-4) are set on revenge when the two teams do battle tomorrow at Wintrust Arena at 1 p.m. The Blue Demons hold a 20-11 all-time advantage in the rivalry, but the Wildcats have won the last two matchups between the two teams.

“It’s a local rival and because they’ve established themselves as a really good Big 10 team and a nationally recognized team for us it’s an opportunity,” DePaul head coach Dave Leitao said. “We’ve had a schedule thus far where we’ve had some opportunities and this is just another one and hopefully if we can do that (take advantage of the opportunity) particularly at home it tells people outside of our locker room a little more of the direction we think we can go in.”

The Blue Demons are coming off a decisive 83-59 victory over the Alabama A&M Bulldogs on Monday when an Eli Cain captained offense distributed 24 assists on 31 made field goals, the highest number since DePaul dished out 25 assists in a Dec. 10, 2011 game against Chicago State. Four Blue Demons scored in double digits, as spreading the scoring around continues to be one of the themes of this season (at least four players have scored in double digits in eight of DePaul’s first ten games this season).

“I’ve said this from day one, that I really like this group and I enjoy being in the gym and being around them every day,” DePaul head coach Dave Leitao said. “I think they feel the same way about each other so it makes growth a little bit more palatable and hopefully (the growth and success) is sustainable.”

Leitao was noncommittal when asked about the status of Marin Maric. The graduate senior center banged his knee with an opponent in the first half of the matchup against the University of Illinois at Chicago last Saturday, and didn’t play in DePaul’s beat down of Alabama A&M on Monday. Maric has averaged 11.6 points and 5.2 rebounds in nine games with the Blue Demons this season.

During the current five game winning streak, the Blue Demons have received significant contributions from some of their bench players after relying heavily on the production of the starters for most of the season.

Redshirt sophomore Austin Grandstaff poured in his first points of the season against Alabama A&M on Monday, finishing the game with career highs in points (11) and assists (five). Thrust into a larger role due to a season-ending injury to starting point guard Devin Gage, backup point guard Justin Roberts has two signature games this season, a 19-point, five-assist effort against the University of Illinois on Nov. 17 and a nine-point game on 3-for-3 from the 3-point line against Alabama A&M. Big man Peter Ryckbosch has become an expert at drawing charges, and his high energy, productive play off the bench in the last two games has been a welcomed surprise for the Blue Demons.

Cain and redshirt junior Max Strus will continue to shoulder much of the scoring burden as the two have combined for 37 percent of the Blue Demon’s points this season. Senior forward Tre’Darius McCallum has quietly put together a strong season. He’s averaging 11.9 points and five rebounds per game and is second on the Blue Demons in 3-point field goal percentage (34.2 percent) among players with at least ten attempts from that range this season.

After an extended lull in terms of strength of schedule, Northwestern will provide the Blue Demons with its toughest test since the PK80 Invitational tournament at the end of November. Before the season began, Northwestern was ranked No. 19/20 in the country, but early season losses to Creighton (92-88) and Texas Tech (85-49) quickly dropped them from the rankings.

“You look at any team you compete against (their) strengths and weaknesses and they (Northwestern) check off a lot of boxes (in terms of strengths) that have them in the position that they are in,” Leitao said. “They did some amazing things (last season making the NCAA tournament) and there’s some watershed moments they had to go through to be in the position that they’re in. Points that you can go one way or another and they fought and found ways through. You use that as a basis of success and it’s something that you can lean on coupled with the fact that you have really good talent and experience.”

The Wildcats returned four starters and two key reserves including its top five scorers from a team last season that reached the NCAA tournament for the first time in program history. The roster this season is veteran heavy with all five starters either being juniors or seniors.

The Wildcats have four players averaging in double figures in points with senior Scottie Lindsey leading the charge at 15.8 points per game on the season. Junior Vic Law chips in 13.7 points per game on a hyper-efficient 48.5 percent shooting from the field.

Leitao addressed the media on Friday afternoon to preview the game. The interview in its entirety is below.