The divide in “Black Mirror” 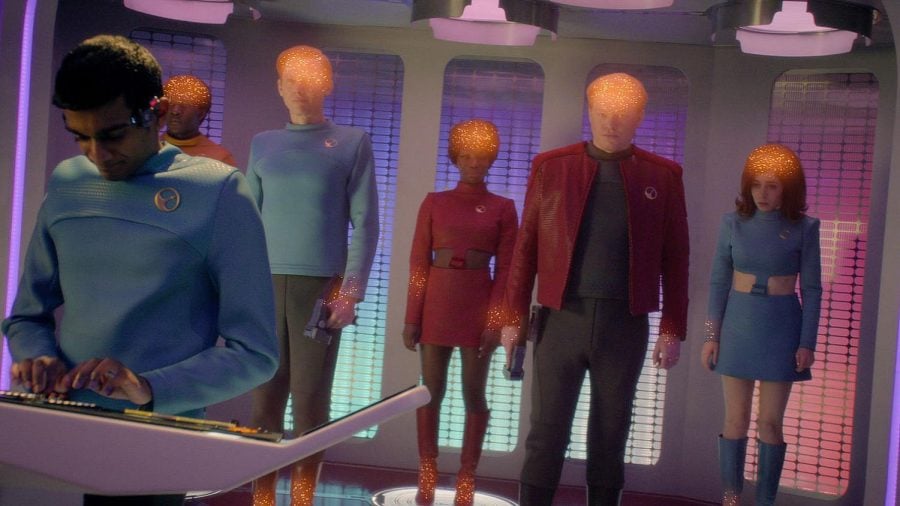 In the season premiere episode "USS Callister," the crew attempts to appease their seemingly bold and charismatic leader, as they are transported into action. (Photo courtesy of IMBD)

A spoiler alert is necessary, as many plot points and endings will be discussed and analyzed from here on out.

The fourth season of Netflix’s British smash hit “Black Mirror” premiered on Dec. 29, 2017 to vivid reactions by fans. Viewers prepared by rewatching the past seasons of the mind-bending series and hoping the newest season follows through. What surprised many is the apparent lack of dystopian, existential and ultimate death-by-invention that was so vital to seasons preceding. This dread of technology and the ultimate demise to robot-human trust is replaced with a more positive outlook towards the good technology can have and creates a karma-centric narrative. Particularly, the episodes “USS Callister,” “Hang The DJ,” “Black Museum” and potentially “Arkangel” have brought much criticism by the more cynical and skeptical viewers.

The critique surrounding these episodes does not come unfounded: viewers have praised the series for its deep connection to the terrors of a tech-centric future. The season three episode “Nosedive,” a woman in a utopian, pastel future where others can rate you 1-5 is determined to increase her rating in order to afford her dream home and subsequently ruins her life chasing this unattainable goal, seems too close for comfort. With apps like Instagram and Twitter where likes and retweets equate to online social status, the ideology around a society attempting to thrive off the high of an accepted internet presence proves insidious.

While the newest season conforms to this inescapable reign of artificial intelligence and deadly tech stuff, with episodes like “Arkangel” where a deeply concerned mother uses a chip to track her teenage daughter through her angst-filled endeavours, viewers cannot help but criticize the lack of existential dread. In the episode, the girl falls in love and experiences heartbreak, something that is easily relatable. This heartbreak is unknowingly at the hands of the mother, as she sees her daughter doing drugs and having sex with her love through a tablet that shows her what her daughter sees. The critical mother ultimately pays, as the episode ends with her searching for her long-gone daughter who has hitchhiked her way to freedom. Though the viewer is left wondering the fate of the hover-parent, the satisfaction of the daughter’s exemption from her mother’s constant eyes surprises but doesn’t disappoint the viewer.

Some veteran viewers were not as pleased with the unconventional escapism as others.

“It didn’t make me as paranoid as the other seasons, which was a disappointment,” said Bess Connelly, a 20-year-old student.

The episode “USS Callister” begins as a traditional “Black Mirror” episode: a “Star Trek” tribute that traps the crew of the USS Callister in an online game controlled by the crew’s captain and real-life boss at his gaming studio, Robert Daly. The crew have been duplicated and held captive in this virtual reality game, and they work to overcome their captain to man the ship themselves. Funny and visually-striking with its perfectly retro homage to the ‘60s sci-fi adventure, the ultimate theme of the show is karma: the big and bad boss eventually pays, as his online presence is left floating in cyberspace as his worldly body is stuck in a vegetative state. This theme is not foreign to the show, like the episode “Shut Up and Dance” achieves in teaching a creep the implications of one’s nasty proclivity.

The closure in the more uplifting episodes hardly gives the viewers the discomfort and displeasure they are looking for. Yet the public‘s focus is not on the encrypted uneasiness and deep-seeded humiliation already pertinent to each episode, including this new season, but to focus and nitpick the polarity between seasons.

An anthology series like “Black Mirror” sets itself up for drawbacks, like running out of storylines. While it’s easy to come up with ideas like “what if your girlfriend was also a microwave” or “what if your mom was a wifi router,” the usual and unexpected cutting-edge formula can become repetitive, as one episode of the newest season exhibits.

“Hang The DJ” feels most like the two-time Emmy-nominated episode “San Junipero,” the electro-80s inspired episode of two young women falling in love, only to find their world is a simulation for the elderly in which they can pass into this world after death. The episode marks the first happy ending for the series – the two women spend their never-ending lives together in the simulation, happily to the tune of Belinda Carlisle’s infectious 1987 hit, “Heaven is a Place on Earth.” “Hang The DJ” plays out somewhat similarly, as two lovers, defying the regulations of their dystopian dating world that puts a timer on each relationship in order to be together, find themselves inside of a simulation that sets a person up with their perfect match. It’s no question that the minds behind the show saw the overwhelming critical acclaim to “San Junipero” and wanted to capitalize on playing with the viewer’s emotions and giving them a break with the love story they deserve, in the midst of technological turmoil. Was the play off worth it? In reality, yes: “Hang The DJ” is a trip of an episode that’s visuals, specifically when the couple descends through the simulation towards reality, and themes, though somewhat cheesy, prove to be a refreshing break from the usual death-by-technology narrative.

Has “Black Mirror” lost much of its technologically-centered facets? In an interview with the Hollywood Reporter, executive producer Annabel Jones expresses the team’s commitment to the unexpected.

“If you have six films and they are all despairingly bleak and nihilistic, it’s not really very entertaining because you know what’s going to happen,” she said.

Regardless of the show’s drive for the unforeseeable, the closed and fulfilling endings will soon dwindle in favor, if not already. None of us signed up for “Black Mirror” to feel fulfilled; we indulge in the fear of our cell phones and targeted Facebook ads.