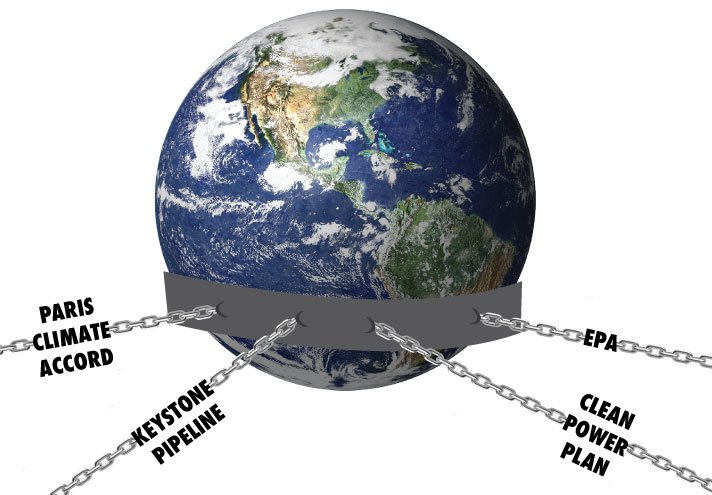 Scott Pruitt, the Environmental Protection Agency’s (EPA) administrator, changed the climate of the EPA in 2017 with a new agenda that focuses on shifting away from overseeing clean air and water. Notably, in October the Trump administration announced that the EPA would be rolling back the Clean Power Plan, an Obama administration policy that established individual state targets for reducing carbon emissions.

The final version of the plan would reduce the national electricity sector emissions by 32 percent by 2030, which is relative to levels in 2005.

Mark Potosnak, an associate professor in the Environmental Science and Studies department at DePaul, doesn’t agree with the roll back the decision to push plan.

“Delaying the Clean Power Plan is a problem for several reasons,” Potosnak said. “First, there was a carefully crafted international agreement that voluntarily asked countries to meet emission targets. By sending a signal that the U.S. is walking away from its commitment, we are opening the door for other countries to do the same.”

Potosnak believes that delaying the Clean Power Plan is problematic for economic reasons, too. “Alternative energy sources like solar and wind energy are competitive economically with coal, but to compete with existing coal plants, there needs to be certainty on economic conditions,” Potosnak said.

Kelly Tzoumis, a professor of public policy studies at DePaul who was a civil servant at the U.S. Department of Energy and worked on Capitol Hill writing about environmental studies, also isn’t too fond of the economics behind this decision.

Another move that  caused the U.S. to take a step backwards  came in June of last year when President Donald Trump announced that the U.S. would be pulling out of the Paris Climate Agreement.

Also referred to as the Paris Climate Accord and the Paris Agreement, the Paris Climate Agreement was drafted in December 2015 at the United Nations Climate Conference in Paris, France. It went into effect in November 2016, with 55 countries representing roughly 55 percent of the world’s global emissions ratified it.

The universal goal of the agreement is to bring in countries around the globe to fight against climate change.

Concerning the universal goal, the agreement has numerous other goals that lie behind the broad phrase of climate change. For example, nations that signed had agreed to limit global average temperatures to not exceed 3.6 degrees Fahrenheit.

Christie Klimas, an assistant professor in DePaul’s Environmental Science and Studies department, isn’t pleased with the decision of pushing out the Paris Climate Agreement. “I am disappointed with the Trump administration’s response,” Klimas said. “I think that true shared sacrifice (globally, nationally and individually) for the common good is the right way to move forward.”

Not to mention, Klimas stated that “as one of the primary emitters of greenhouse gases (both historically and currently), we have a moral responsibility to accept that actions that benefited our development are negatively affecting others.”

Every nation that signed has an individual plan to tackle its greenhouse gas emissions. Given that the mission of the agreement has such an enormous global effect, Tzoumis expressed disappointment in the president’s idea to withdraw and believes that it puts a dent in the U.S. being a global power in terms of policy.

“We’re a leader in the policy world,” and “it hurts our leadership in terms of policy,” Tzoumis said. “We were making progress,”  but now “it puts us in a very terrible position.”

Reinforcing Tzoumis, Potosnak states that “the U.S. is losing its leadership position.”

On top of the U.S. losing ground in policy and leadership, Tzoumis believes that this withdrawal has scientific losses as well, mentioning that the U.S. is already one of the top polluters in the world.

Another controversial environmental deal came last March when the Trump administration approved a permit that was blocked by former President Barack Obama to build the Keystone XL pipeline.

The pipeline runs for 2,687 miles, stretching from Hardisty, Alberta in Canada to Nebraska and then splits, with one section going to Texas and the other going to Nebraska. If it’s built, roughly 830,000 barrels of heavy crude oil could flow from Alberta, according to National Geographic.

As economically efficient as that may sound at a first glance, the consequences of actual construction could be brutal. For example, on Nov. 17, 2017, 210,000 gallons of oil leaked in South Dakota.

On the other hand, Klimas stated that the pipeline might not be an unwise decision.

“If the Keystone XL replaces offshore oil drilling, I might favor a land pipeline due to the vulnerability of coastal ecosystems to oil spills. The coastal counties within the Coastal Zone Management Program account for almost half the U.S. GDP,” Klimas said. “These are irreplaceable environments valuable far beyond their economic contribution. So, for me, the alternative matters in the Keystone XL discussion.”

While a handful of environmental policies have been scaled back as of late, national parks have begun to fall into this trend as well.

Whether or not these decisions regarding environmental policy have been influenced by Trump and his administration, his “egocentric” personality along with “his competitiveness” plays a part in the decision making, according to Tzoumis. “He’s undoing what the Obama administration did.” Tzoumis believes that the Trump administration is simply “not listening to the public.”

As of now, chances of progress for environmental policy seem slim to none as the year moves on. Arguably, this is a year to doubt the environmental progression that the U.S. is taking. 2018 is looking like the year for deregulation and cutting back on solving the climate change dilemma from a partisan view.