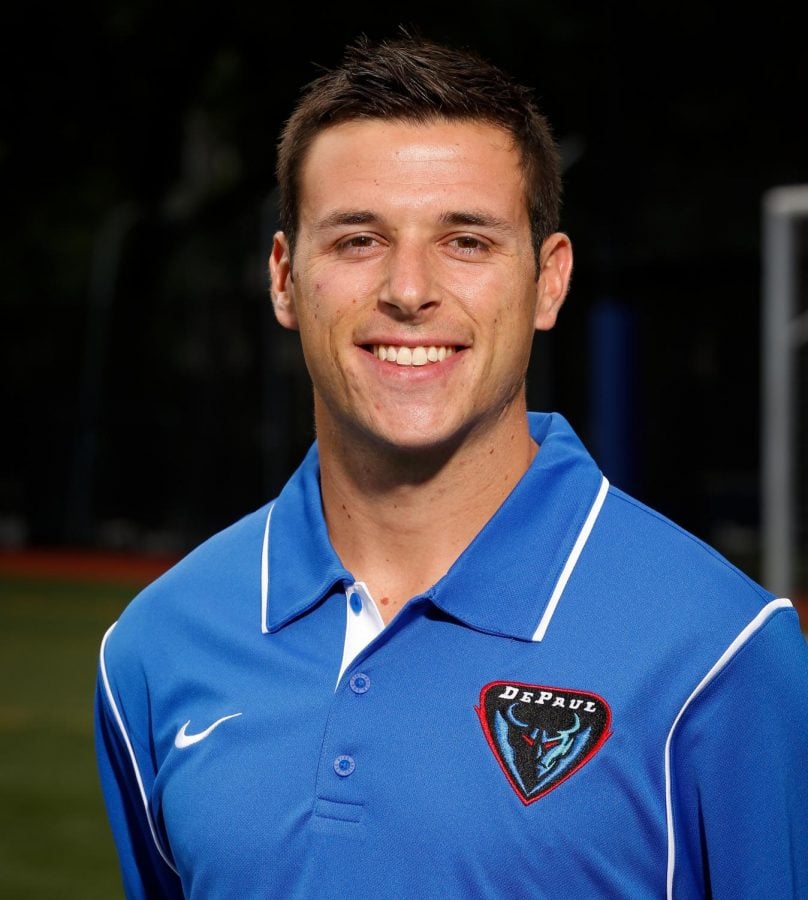 When DePaul men’s soccer’s new head coach Mark Plotkin left for Colgate after the 2013 season, he hoped at some point he would be able to return to Chicago to be closer to family.

What he didn’t know is it would be just a couple years later, and that opportunity would be to coach at his alma mater.

“I was honestly speechless,” Plotkin said. “I couldn’t say a word because it was like every dream you’ve ever had came true in one phone call and I had nothing to say, it was unbelievable.”

Plotkin was a midfielder for the Blue Demons from 2006-09 and an assistant coach during the 2012 and 2013 seasons before becoming an assistant at Colgate.

Since the news came shortly before Christmas, DePaul’s new coach was able to share the news with his family over the holidays. Plotkin and his wife’s family live just outside the city in Naperville and it was always the plan for them to eventually get back to Chicago.

“Going home and being able to tell my mom, my dad and my sister I was going to be coming back it was huge because they all live in Chicago,” Plotkin said. “It was great to be able to come back and see them more often.”

Plotkin met with the team last Monday for the first time and just a couple days later they were on the field for their first workout of the winter quarter. Plotkin’s message to the team was centered around what a special place this was for him and his hope to provide an even better experience for them.

“I talked to them a lot about just how special this place is for me and how it was the best four years of my life when I was a student athlete here,” Plotkin said. “It’s my goal to give them a better experience than I did.”

Junior midfielder Zach El-Shafei said the team has enjoyed getting to know their new coach and been impressed with the way he has connected with them so far.

“You can kind of tell he’s a really genuine guy, he really cares for us already,” El-Shafei said. “He just wants the best for us and he really cares about us, some of the guys who have knocks just to be fully recovered, don’t rush anything.”

Senior defender Anton Sell also pointed out one positive is Plotkin’s alum status and how he is able to be a resource to them both on and off the field.

“He’s a DePaul alum, so he really knows how everything works here and how it works as a player,” Sell said. ”I really think he can identify with us and relate and solve problems.”

Plotkin took over for his former head coach Craig Blazer after a 5-11 season a year ago. Blazer spent 17 seasons as the head coach of the Blue Demons and both players were thankful for the opportunity he gave them, while noting they are ready to move forward and work hard for their new coach.

“I’m just thankful I was given the opportunity here,” El-Shafei said. “I enjoyed my time the first few seasons.”

“Last year was extremely frustrating,” El-Shafei said “In the sense, we lost all those games by one goal so we’re sort of using that as extra motivation, it’ll fuel us, make us hungrier.”

Plotkin has been able to watch some film from a year ago and is optimistic about turning the team around with a couple of tweaks and making sure everyone is on the same page.

Plotkin believes one of his strengths is being able to relate each player and have a good balance on how to treat each player individually. Given the nature of soccer, however, Plotkin said his focus is on making sure his 11 players on the field are connected and communicating with each other.

“When you’re out on the field, you’re just working for each other (…) that’s the fun part—you get out on the field, I can’t talk to you for 45 minutes,” Plotkin said commenting on the unique role of coaches. “I can scream things from the side, but (that doesn’t) really have that big an impact (…) so for me it’s just making sure they’re bought into each other, will do anything for each other, and that’s where the success will come.”

For a team that was in the Big East tournament as recently as 2016, Plotkin said the first step is getting back to that level and having a chance to advance further.

“Immediately, I want to improve on last year’s season,” Plotkin said. “I want to have a better year, I want us to focus on just getting into the Big East tournament and knowing that once you get into the Big East tournament, it’s just the game of soccer-anybody can beat anybody on any given day, so for us, the immediate part is just focusing on developing individually and collectively this offseason, not necessarily focusing on results.”

Now that Plotkin is back, the Blue Demons hope history repeats itself and the four-year starter can return to the NCAA tournament for the first time since 2007, the first and only time they’ve made it.