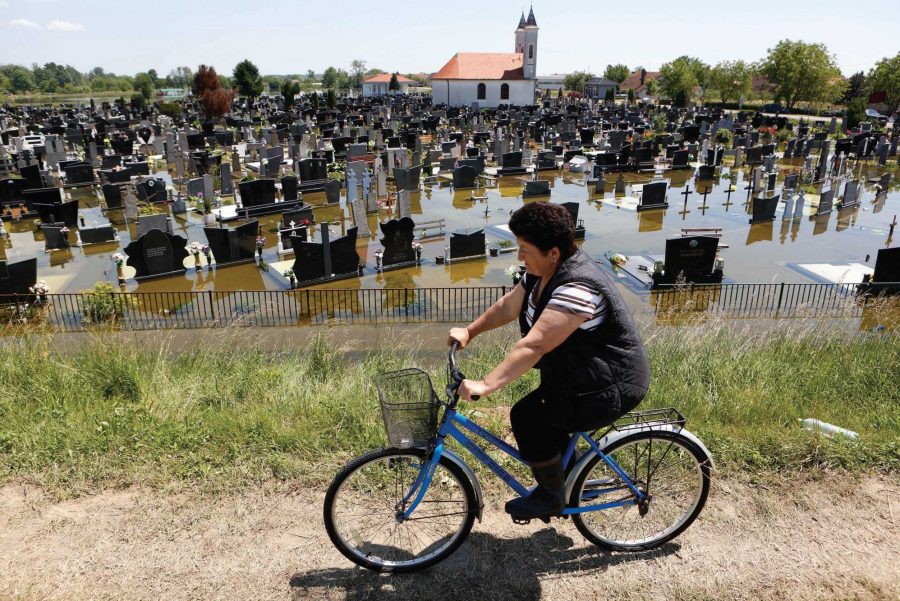 A Bosnian woman cycles past a flooded cemetery in the village of Domaljevac near the Bosnian town of Orasje along the river Sava, 124 miles north of Sarajevo, Bosnia's capital. (AP Photo)

Bosnia, Serbia and Croatia are picking up the pieces of their broken nations after a “biblical” level of rainfall caused massive flooding.

According to the Guardian, three months’ worth of rain fell on the area known as the Balkans in a three-day span. Experts said that level of rainfall happens only once every 100 years. The devastation so far has caused 51 deaths, the Weather Channel reported: 27 in Serbia, 20 in Bosnia and two in Croatia. According to Al Jazeera, 100,000 Serbian homes and 230 schools were destroyed, and 30 percent of the country’s railways are inaccessible.

Even though the Balkans are miles away, Neda Bencun, a senior public relations and advertising major at DePaul, personally feels the impact of the flooding. Bencun was born in Serbia and left the country in the ’90s soon after the Bosnian War reached its end. She grew up in Chicago, but remains very much connected to its large Serbian population.

Some members of Bencun’s family still live in Serbia, and she said her family visits their relatives every two years or so. Bencun said her relatives live in areas that weren’t devastated as badly, and they can still get supplies despite many places being closed.

News outlets have compared the damage to devastation incurred during the war, and Bencun believes that’s an accurate analogy. Citizens of both countries were finally getting back on their feet, she said, but now they have to respond to this disaster. She said the only difference between the war and the floods is the number of casualties.

And indeed, both countries will face a severe economic blow. The damage in Bosnia is projected to cost an estimated 1.3 billion euros to repair, the Weather Channel reported. Meanwhile, Serbia is faced with a 1.5 billion euro project.

Because of this damage, the Balkans have seen a wave of displacement comparable to that during the war. Reuters reported that 35,000 Bosnia residents were evacuated by truck, helicopter or boat, and another 500,000 left their homes on their own.

“It’s going to take months, if not years, for this to subside,” Bencun said.

In Bosnia, a major concern is the presence of land mines leftover from the war. The country is currently littered with 120,000 unexploded mines and 9,400 marked mine fields, the BBC reported. But, some of those are covered by one of the 2,000 landslides caused by the flooding.

The damaged nations have sought and received aid from Russia and the European Union. Russia in particular flew in cargo planes filled with food and power generators, according to Al Jazeera America.

However, Bencun said the smaller nations are stepping up as well. Organizations in Slovenia, Macedonia and beyond are all offering humanitarian aid to Serbia and Bosnia. These groups have given everything from medicine to volunteers. Croatia also provided assistance to Bosnia and Serbia, even though it was also affected by the flooding, Bencun said.

Bencun also shared the story of Serbian tennis player Novak Djokovic, who asked for the international community’s attention to the incident after winning a match in Rome. He donated his winnings not only to his homeland, she said, but to Bosnia as well.

Bencun said this sense of unity is incredibly important when one remembers that these countries were once at war. While she doesn’t know how long the peace will last, she noted that they are all one right now, regardless of history.

“Neighbor is helping neighbor, despite previous tension and differences,” she said.

People in Chicago are also bridging that divide. Bencun said people in the Serbian and Bosnian communities are donating to a wealth of organizations, regardless of their origins.

“At this point, it doesn’t matter which organization that is and to who it is going because everyone affected is in need,” Bencun said.

Several churches in the Chicago area have been collecting food and supplies for the devastated nations, including St. Simeon Mirotochivi Serbian Orthodox Church and St. Nikola Serbian Orthodox Church in Brookfield, Illinois. Websites such as the Novak Djokovic Foundation and Serbs For Serbs are also accepting financial contributions.