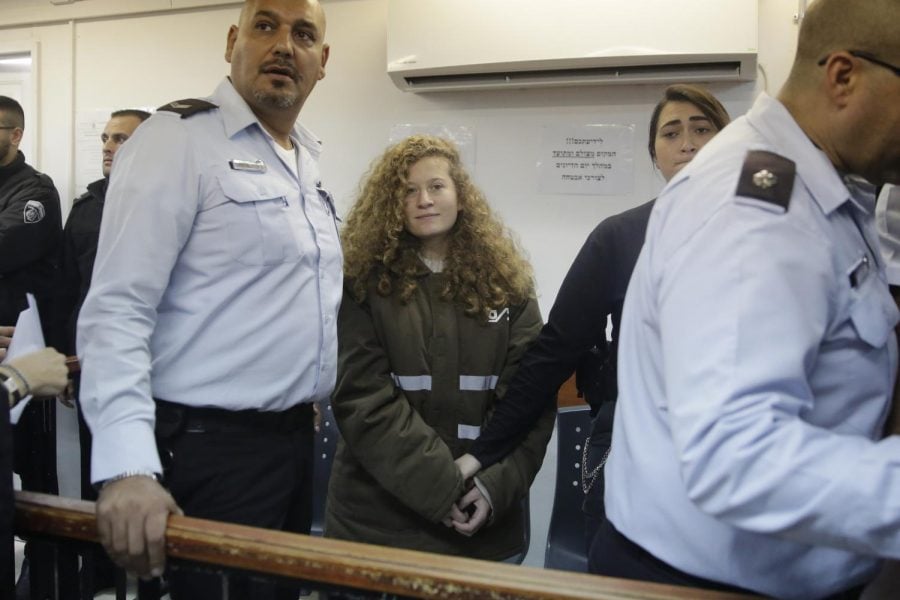 Ahed Tamimi is brought to a courtroom inside the Ofer military prison near Jerusalem, Monday, Jan. 15, 2018. Tamimi, 16, was filmed in December pushing, kicking and slapping Israeli soldiers, who stood by silently. (Mahmoud Illean | AP)

Students for Justice in Palestine

DePaul’s Students for Justice in Palestine (SJP) would like to strongly condemn the recent announcement made by President Trump on Dec. 6, 2017, declaring Jerusalem as the capital of Israel. Under the 1947 Partition Plan, the United Nations has given Jerusalem a special status, recognizing it under international sovereignty and control. Since 1967, Israel has illegally annexed East Jerusalem and is deliberately disregarding and breaking international law. There in no other country in the world that has its embassy located in Jerusalem.

SJP DePaul also offers their unwavering support for Ahed Tamimi, a 16-year-old Palestinian student and activist. On Dec. 19, the Tamimi household was raided in the middle of the, night and shortly after, her parents were informed that she was being arrested, without reason for her arrest. Since then, Ahed has been detained, interrogated, and is facing charges of assault with prosecutors trying to force her into a confession.

According to Amnesty International, “Israeli authorities must release a 16-year-old Palestinian activist who could face up to 10 years in prison over an altercation with Israeli soldiers in the occupied West Bank.”

Ahed’s situation is no different than those of the countless Palestinian children who face persecution in Israeli courts daily. Her arrest took place just one week after her 15-year-old cousin, Mohammed Tamimi, was shot in the head by Israeli soldiers causing a partially broken skull and leaving him in a coma for several days. The Tamimi family is just one example of the endless list of the systematic violence which Palestinians face every single day under occupation.

Each year between 500 and 700 Palestinian children are prosecuted. This year alone, over 300 Palestinian children have been detained by Israeli forces. Under arrest, these children face brutal treatment including long interrogations, solitary confinement, and forced confessions. Due to this severe and unjustified repression Israel has a 99.7 percent conviction rate of Palestinians. No child should have to live under such harsh conditions of occupation, policing and persecution. Palestinians face this struggle day after day as they have for over 70 years.

In response Trump’s declaration as well as Ahed’s unjust detention, we decided to hold a silent protest and rally on Thursday, Jan. 18. A group of 25 people silently marched through DePaul’s campus and then gathered for a rally in front of the Student Center to assert that Jerusalem will always be the capital of Palestine. DePaul student organizations and other local Chicago organizations voiced their support and solidarity for the cause. In conclusion, SJP at DePaul stands in solidarity with Ahed Tamimi and all Palestinian political prisoners. We denounce Trump’s declaration and refuse to acknowledge Jerusalem as Israel’s capital.