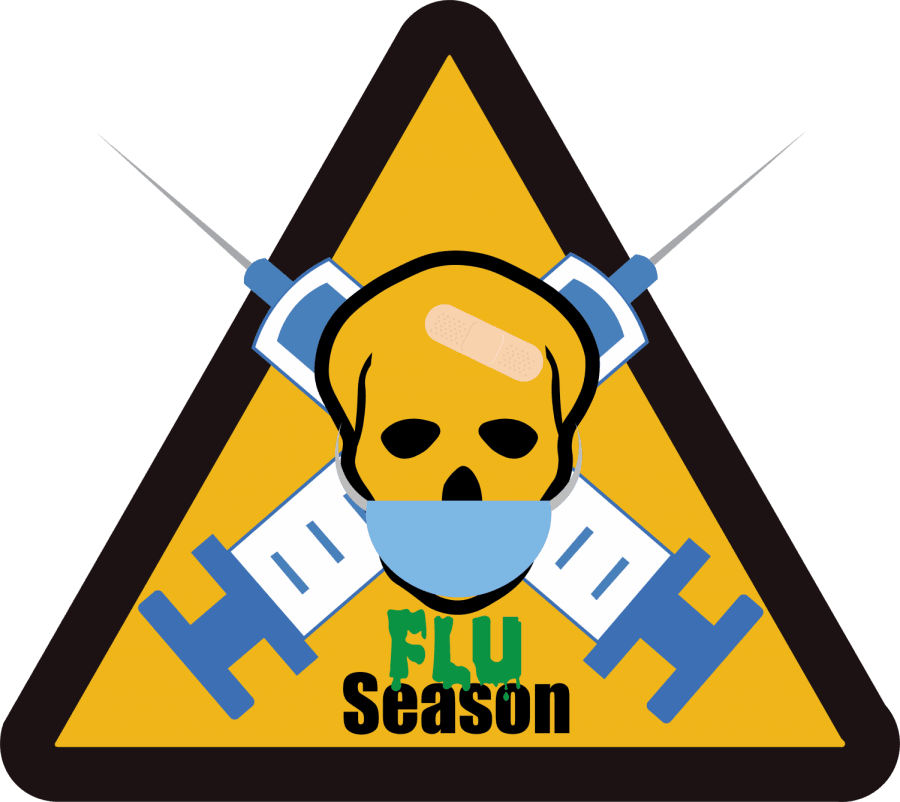 Signs are posted in public restrooms across the nation with reminders to wash your hands and cover your mouth for coughs. The reason for businesses and schools breaking out the warning signs isn’t just for fun — this flu season has been brutal and possibly one of the worst in recent history.

According to the Center of Disease Control (CDC), every state has flu virus, or influenza, activity. There has been an increase in doctor visits and hospitalizations and some reported deaths due to the flu. Flu season started early, and this is just the peak time for it, with a few more months to go.

The outbreak has left many wondering how the flu spread so fast. Influenza is unpredictable, and every season there is different activity. The virus mutates into a new strain every year, and the vaccine is updated to combat the new strain. This year’s strain, H3N2, is the most common one going around at the moment and is not being knocked out by the vaccine easily. When H3 viruses are the present strain of influenza, more people tend to get sick quicker, leading into more deaths.

Children and adults over 65 are more susceptible to the virus than other age groups. Kristen Nordlund, a press officer for the CDC, reported that the agency has received more reports of children being hospitalized due to the virus over the last decade.

The epidemic has become so widespread that the CDC held a briefing on Jan. 12 to update the public on the news of the rapidly-spreading virus. The CDC has been monitoring the spread of the virus for 13 years, and this is the first year that the virus has spread so rampantly across different states.

“The CDC recommends getting the flu shot, even now, because it has the possibility to decrease the severity of your symptoms if you do contract it,” junior health sciences major Morgan Taylor said.

So far, over 100 people have died from the flu in the past year. Thirty of those have been children, though the number may be going up. As of Jan. 25, another 12-year-old child in Florida died from the flu. His family was shocked and noted that he had been playing with his siblings that weekend. He didn’t seem sick, but he is just the latest in a number of others who have died from getting the flu.

Most children and adults who died from the flu did so just days after being diagnosed. The flu, and complications that come with it, has stripped otherwise healthy individuals of their lives within days.

Every year, healthy children and adults are killed by the flu. This is because there may be other conditions going on that the virus disturbed or worsened, just as other illnesses or weakened immune systems.. Death from the flu is expedited by prior health conditions, infections or the flu developing into a more serious illness.

“There have been over 30 pediatric deaths this year due to their strength and the fact that people aren’t getting their flu shots as often anymore, ruining their immunity,” Taylor said.

Schools in at least 12 states including Illinois have closed their doors due to the flu spreading rapidly throughout the student population. Litchfield was closed last Thursday and Friday now that 20 percent of students are out with the flu.

Flu season has reached its peak, and officials hope the numbers will start declining before reaching last year’s total of approximately 200 people dead. The CDC is encouraging people to get the vaccination to provide some defense against the virus. However, this year’s vaccine isn’t as effective as previous years. Some who have died did, in fact, get the flu shot.

According to Sarah Connolly, a biomedical sciences professor at DePaul, the true effectiveness of this year’s vaccine won’t be known for another few weeks.

“Although the H3N2 component of the vaccine may be less effective this year, this may not be not unusual for an H3N2 vaccine,” Connolly said. “A typical influenza vaccine reduces illness by 40 to 60 percent.  Previous H3N2 vaccines are more like 30 percent effective, so they were not as effective, but still an important tool for preventing the disease.”

Not all believe that getting the flu vaccination is worth it. The anti-vaccine movement has taken off in the last few years, with some anti-vaxxers saying it is like putting poison into your body. Jeffrey Winters, a senior at DePaul, hasn’t received the shot for quite a while.

“My mom is against it because she thinks it makes you sick, so I haven’t gotten it in years,” Winters said. “I haven’t been sick either.”

One of the main reasons the virus spreads so easily is because people don’t practice good habits when they’re sick. Taking antiviral medications, staying home from work or social places when sick, frequently washing your hands and disinfecting surfaces can help prevent catching and spreading the virus.

Still, officials believe the vaccination is one of the best forms of defense out there right now. Some protection is better than none. Even if it may not help one person, it can help others around them.

“Getting an influenza vaccine can protect both you and the vulnerable people with whom you come into contact,” Connolly said.