Government shutdown and out 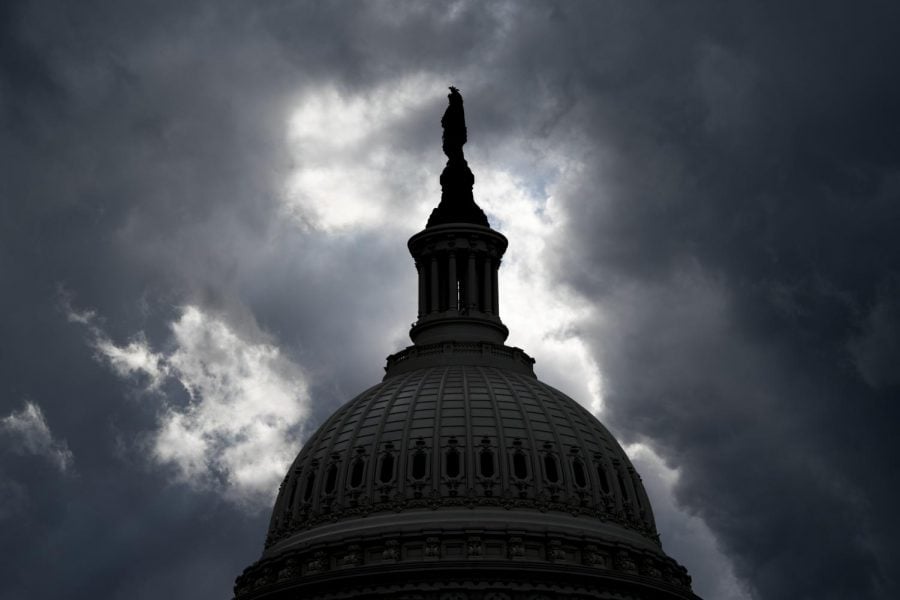 After a three-day shutdown, the government is back, at least for the time being.  President Trump signed a short-term spending bill to keep the government afloat until Feb. 8 after Democratic leadership tried and failed to use the budget as a bargaining tool in immigration discussions.

Senator Chuck Schumer, D-N.Y., minority leader in the Senate, lead discussions with Republican leadership using the government funding and potential shutdown as leverage to guarantee protection for DACA immigrants. Schumer took a gamble by forcing a shutdown, risking some Democratic incumbent re-election chances as well as the image of the left. Unfortunately the Democratic party is taking the blame for the shutdown after caving in on their demands.

Political science professor Wayne Steger described the Democrat’s situation, saying, “The Democrats had almost no bargaining leverage here. Republicans were only gaining 17 days of continued government operations and Democrats were very likely to be on the losing side of the rhetorical battle. So Democrats could only hurt their chances in the fall 2018 Senate elections.”

Even before the actual shutdown Schumer bungled negotiations, making the mistake of offering President Trump funding for his proposed wall along the Mexican border. This action is counterintuitive to the Democratic stance on immigration and exemplifies the lack of options available to Democrats. Schumer later rescinded the offer making Democrats look even more disorganized. To make things more difficult, President Trump has now reiterated his stance that there will be no DACA if there is no wall.

Eventually an agreement to debate a bipartisan immigration bill in the next few weeks was reached during the shutdown by Schumer and Senate Majority Leader Mitch McConnell, R-Ky. Progressive Democrats remain skeptical that compromise will be reached, causing 15 Democrats to vote to keep the shutdown going. Unsurprisingly these votes included some possible Democratic presidential candidates who wanted to make a show of their fight for immigrants.

The agreement is also being doubted by other Democratic senators who don’t believe this will guarantee action from the Republican Party or compel Paul Ryan to bring up immigration in the House, let alone guarantee that President Trump will sign it.

The government shutdown was an attempt by the Democrats to voice solidarity with the Dreamers and signal their support to immigrant rights activists. Taking this symbolic stand for immigration by shutting down the government had its supporters but ultimately could be disastrous for the entire Democratic party in the upcoming Senate elections.

Democrats who are running for re-election could be attacked via campaign ads for shutting down the government and not paying soldiers in favor of protecting illegal immigrants.  Democrats in districts or states with a large immigrant or Latinx population may potentially benefit from this stance but the overall effect on the party is seen to be negative.

Framing the shutdown in this way could seriously impact Democrats chances of re-election, especially for the 11 senators running in states won by Trump in the last election and others in mostly conservative-leaning states like Wisconsin or Virginia. If backing down on DACA significantly affects voting in these states, it is possible that Republicans could gain enough seats to be essentially filibuster-proof.

Rather than agreeing to end the government shutdown Schumer and the Democrats should have been firm on the DACA demands. President Trump has already stated that he wants a deal to legalize the undocumented immigrants, making the shutdown simply a war of attrition.

Had they had stood their ground and continued the shutdown, experts say President Trump would have been forced to take action on DACA.

A longer shutdown may also have prompted President Trump to be more vocal on the issue. During the weekend shutdown the President was unusually quiet and made no public appearances, thereby putting pressure on Republican senators to reach a deal themselves.

By caving in, Schumer risks damaging incumbents’ chances for re-election in red states, letting Republicans take full control of the Senate and marginalizing the progressive Democrats that are gung-ho for DACA. The upcoming immigration debate and continued budget negotiations will show if the Democrats can calm the unrest within their ranks and work to secure legal status for the immigrants.