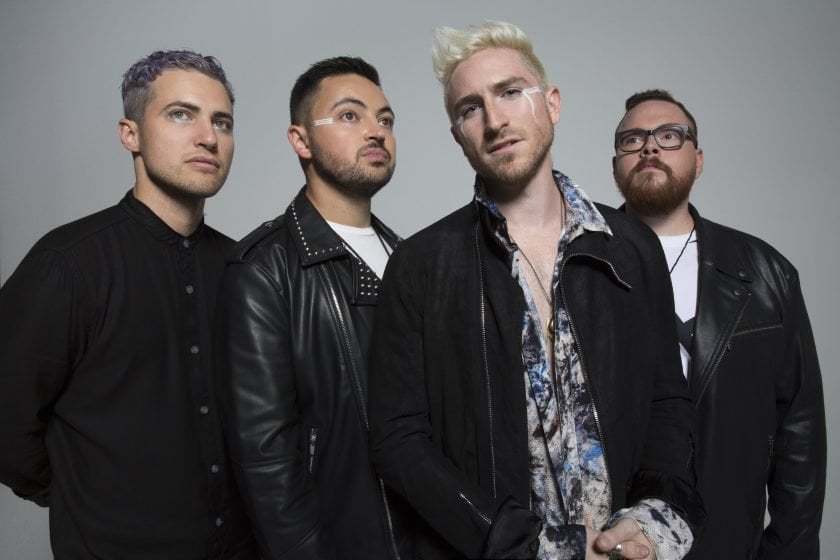 Walk the Moon announced their "Press Restart Tour" last fall promoting the release of their newest album, "What If Nothing, that came out Nov. 10, 2017. (Courtesy of RCA Records)

Underneath the star-painted ceiling of Aragon Ballroom, hundreds of devoted fans exchanged energies with indie rock band Walk the Moon.

Walk the Moon is an American indie rock band, originally from Cincinnati. Formed by lead singer/keyboardist Nicholas Petricca, the band has gone through a variety of lineups, with Petricca remaining the only constant. Current members also include lead guitarist Eli Maiman, bassist Kevin Ray, drummer Sean Waugaman. While primarily an indie rock group, the band is also classified as new wave, dance-rock, and indie pop, among other genres. The band has listed Talking Heads, David Bowie, The Police, and Phil Collins as primary influences.

As part of their Press Restart Tour, Walk the Moon took the stage of Aragon on January 26th, with Chicago-based indie rockers Company of Thieves. Company of Thieves played an impressive 30-minute set, including original songs, such as their 2009 debut single “Oscar Wilde” as well as a cover of The Killers’ “When You Were Young,” much to the delight of the crowd. The originals played were energized and punchy, with the band throwing themselves fully into their performances.

Once Company of Thieves took to the crowd, fans were growing restless to hear Walk the Moon. As the house lights dimmed, deafening shrieks filled the room, with the hysteria only growing as the band took the stage. Walk the Moon began their set with the tour namesake “Press Restart,” off their 2017 album “What If Nothing.” The song is a slow burn, beginning with an understated vocal harmony and sparse accompainet. The song builds to a triumphant anthem, with a soaring chorus, filled with bombastic drums and energetic vocals.

Walk the Moon maintained a good variety in their set, playing fan favorites from all three of their studio albums. Many of their songs deal with relationships and new experiences, each tune projecting an energetic, optimistic tone. The songs lend themselves to dancing, with singles such as “Tightrope,” “One Foot,” “Shiver Shiver,” and their 2014 smash hit “Shut Up and Dance”  electrifying the dancefloor.

Around the midway point of their set, Ray and Waugaman left the stage, leaving only Petricca  and Maiman. The two played a delicate performance of “Aquaman” off their 2014 album “Talking is Hard.” The song, a New Wave influenced pop ballad about the joy of new love, took a more personal, effective turn. Petricca’s vocals were emotional and expressive, with the crowd singing in tandem with him. Towards the end of the piece, he asked the crowd to sing the final chorus in memory of loved ones who have passed, possibly alluding to his father’s death in 2017.

Both Walk the Moon and the crowd maintained an intense level of energy, with the crowd’s singing nearly overpowering the band itself. Feeding off the crowd’s energy, Walk the Moon climbed atop the stage risers as fans sang.

The group closed their set with “Headphones,” a highly-energized, hard-rock inspired tune about being mistreated by a former lover. After they vacated the stage, fans clamored enthusiastically for their return. The band obliged, with their encore sending the fan’s excitement to exponential levels. The band began the encore with “Up 2 U,” a song with a heavy groove and even heavier drums.

The true showstopper of the evening was the band’s performance of their 2011 breakthrough hit, “Anna Sun.” The song is monumental and lush, evoking the seemingly endless adventures of young adulthood, and creating one’s place in the world. The crowd erupted into joyful screams upon hearing the opening keyboard swell and screamed the song’s lyrics back to the band. Towards the songs bridge, Petricca ventured into the crowd, with hoards of fan rushing towards him. Petricca remained on the floor for a remainder of the song, with the concert ending on a positively triumphant note. Following the end of the encore, Walk the Moon remained on stage, thanking fans and throwing drumsticks, bass and guitar picks, and other memorabilia from the stage into the crowd.

In a seemingly never ending crowd of indie groups, Walk the Moon stands out due to their intense energy and clear love for their craft. Their appreciation and gratitude for their fans is palpable. In short, Walk the Moon has the talent, stamina, and dedication to keep entertaining even bigger crowds for years to come.