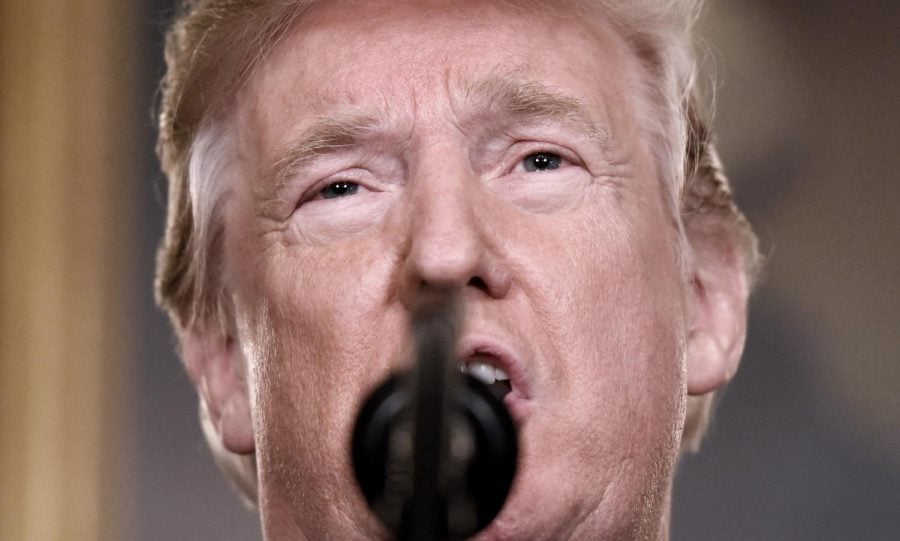 U.S. President Donald Trump declares formal recognition of Jerusalem as the capital of Israel during a statement on Wednesday, Dec. 6, 2017 in the Diplomatic Reception Room of the White House in Washington, D.C. (Olivier Douliery | Abaca Press)

In a heated political climate, the conflict between Israel and Palestine is among the more controversial issues in politics today. On the DePaul campus two student groups, Students for Justice in Palestine and Students Supporting Israel represent both sides of this debate with passion and vigor– and they do so with little direct interaction.

The Israel/Palestine conflict resurfaced when the Trump administration recognized Jerusalem as Israel’s capital city on Dec. 6, 2017 and announced plans to move the US embassy there from Tel Aviv in six months.

This was a departure from over 70 years of U.S. policy, which has always attached recognition of Jerusalem to a long-term peace agreement between Israel and Palestine. The move is controversial because both the Israeli and Palestinian governments claim Jerusalem as their capital.

DePaul SJP held a rally on Jan. 18th protesting the decision and released a statement condemning alleged Israeli injustices the next day. “We denounce Trump’s declaration and refuse to acknowledge Jerusalem as Israel’s capital,” the statement concluded.

DePaul SSI and SJP both offered impassioned arguments for their causes as well as criticisms of their opponents.

Ali argues that it is important for Americans “to understand this crisis because the U.S is the leading supporter and ally of Israel that heavily aids Israel with billions of dollars in military funding. This funding that is massacring thousands of Palestinians and is trying to ethnically cleanse an entire population.”

She stated that SJP “stands with BDS which is Boycott, Divestment, and Sanctions that is a campaign against these atrocities of the apartheid state of Israel.”

The BDS movement, a campaign to place economic and political pressure on Israel to end what it describes as violations of international law, is a point of contention between the two student groups.

“Probably the two most public and incendiary initiatives would be the notion that Israel is an ‘apartheid state’ and the Boycott, Divestment and Sanctions movement,” said SSI treasurer John Minster.

Minster argued that Israel is one of the most functional democracies in the world, noting that the Knesset (Israel’s legislative body) “has a prominent Arab block, and if you ask Israeli Arabs if they would rather live in Israel or what could be Palestine, a vast majority prefer Israel.”

In Minster’s opinion, deals for Palestinian statehood have been offered by past Israeli governments and consistently rejected by Palestinian authorities.

“BDS actually hurts Palestinians,” Minster said.  “A significant amount of Palestinians spend hours commuting from Judea & Samaria into Israel to work every day. BDS directly hurts those people and their incomes, despite the idea that it is a ‘pro-Palestinian’ initiative. It’s not.”

Minster also said that “Israel is a vital partner to the United States; they provide us with technological advancements, proximity for military cooperation, as well as crucial intelligence capabilities. Further, they are the only state in the Middle East who shares many of our republican and democratic values.”

“Israel is the foremost purveyor of human rights in the region,” Minster continued. “Israel has (…) an equitable, functioning government. With that, not only do they provide a homeland for some of the most persecuted people in the history of the world, the Jews, but Israel also has numerous other communities who live in peace and prosperity. It is the only place in the region where that is possible.”

While Minster or Ali did not offer any more specific examples of encounters between SJP and SSI, president Kati Danforth referred to an episode in 2016 when SJP held a fundraiser for Rasmea Odeh, a pro-Palestine activist convicted by Israeli courts for her role in the 1969 bombings of a Jerusalem supermarket. That attack killed two Israeli students. Odeh later alleged at an immigration fraud hearing in 2014 that her confession to the crimes had been extracted by torture while she was in custody.

Danforth said, “My thoughts on SJP overall is that it has a tendency to spew hate on our campus, and the goal of SSI is to work towards peace for Israelis and Palestinians.”

Campus political debates like these are a useful measure of public opinion and the nature of political conversation on campus. In this instance, it seems an old and convoluted political problem has led to students soundly convinced of their own side, with little engagement between groups.