Women’s basketball locks in for the final stretch 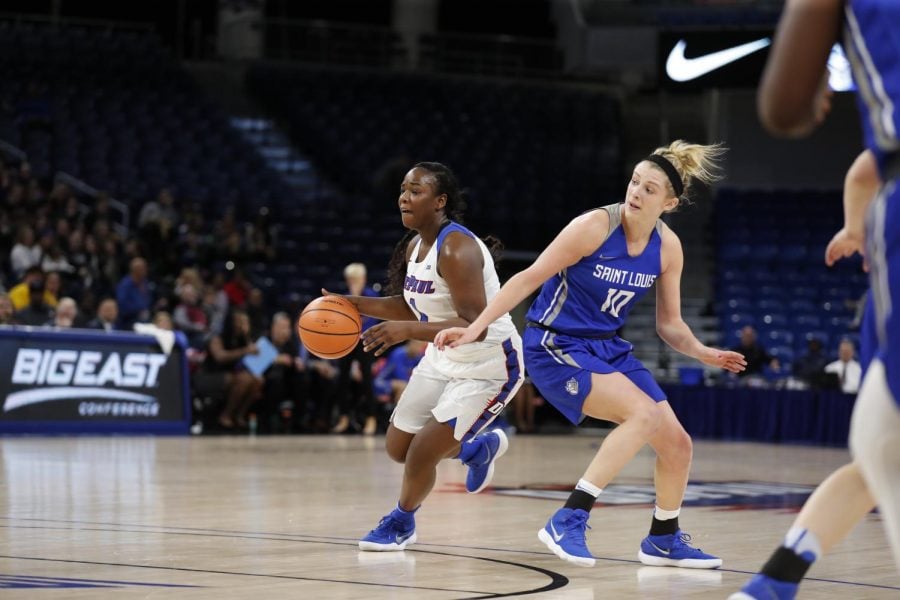 A season that started with a loss to Northern Colorado, has been filled with peaks and valleys since that has DePaul (15-6; 7-2 Big East) poised for a late season run as they hope to win their fifth consecutive Big East regular season title.

The season started with the Blue Demons losing graduate transfer Rebekah Dahlman on opening night, and have experienced other hurdles along the way, but have begun to find their form winning five of their last six games following a loss to Marquette in early January.

The Blue Demons’ success can be attributed to numerous factors, especially their performance shooting the ball behind the 3-point line. Notably, the Blue Demons lead the nation in made 3-point field goals with 266 of them.

“We give our players the greenest green light in America,” head coach Doug Bruno said. “We coach a simple concept here at DePaul: shoot it or share it. We think any shot when you’re open is a good shot. If you’re not open, it’s a bad shot.”

Another key element to the Blue Demons’ success has been their consistent ability to share the basketball and find the open teammate for high percentage shots. DePaul ranks No. 2 in the nation with 443 total assists on the year and No. 5 in assists per game.

Those two key team elements on the offensive end have helped the Blue Demons average 84 points per game, which is the 10th best scoring offense in the nation. All of this has come after the Blue Demons had three of their top players graduate last June in Jessica January, Jacqui Grant, and Brooke Schulte. Even with those losses, Bruno still trusts the process of his program.

“I really just think we are a program here at DePaul,” Bruno said. “A program means that the elders teach the youngers and the youngers grow up and they get experience and learn how to grow into their roles.”

Due to roster turnover, Bruno has changed up the starting lineup a bit in conference play. Over the course of the nine games thus far in the Big East, Bruno has been shuffling the fifth starting spot in the rotation between Chante Stonewall who’s started five games, Tanita Allen who’s started three games, and Lauren Prochaska who’s started just one game.

Because Allen has been plagued with injuries this season and wasn’t healthy against UConn, Northwestern, and the first game against Marquette, Bruno now has her coming off the bench. “We’re bringing Tanita off the bench just to help her get recovered,” Bruno said. “I think she’s playing her best basketball now, she’s playing her most consistent basketball,” averaging 8.9 points per game and shooting 42.1 percent in Big East play.

For Stonewall and Prochaska, “it’s about match ups,” Bruno said. “We have seven solid starters in this program right now,” so mixing up the starting lineup every now and then isn’t a huge deal for Bruno. The other four starting spots in Big East play have been consistent with Mart’e Grays, Ashton Millender, Kelly Campbell, and Amarah Coleman.

In order for the Blue Demons to have had team success, especially in conference play, the starters have stepped up and have played excellent basketball.

One of those players is redshirt junior Grays, a six-foot-two-inch forward who missed the entirety of last season with a torn Achilles tendon. “This year I’m glad to be on the court, ready to play,” Grays said.

Grays credits her dialed-in focus to her success this season.

“It’s all about focus,” Grays said. “I’m just trying to focus on the little things and just helping my team.”

An all-around guard, throughout conference play Campbell is averaging 10.7 points per game, and a big part of that is due to her excellent 49.3 percent shooting from the field. On top of that, Campbell is 2nd in the conference in 3-point shooting percentage at 47.4 percent.

And of course, shooting 47.7 percent overall in conference play has certainly helped her cause. That’s 11th in the Big East.

Furthermore, Coleman, a five-foot-11-inch senior who played her first collegiate basketball season at Illinois before transferring to DePaul, has been a reliable source of production for the Blue Demons. In conference play, Coleman is averaging 10.1 points per game and her three assists per game is tied for 12th in the Big East.

While the Blue Demons have had satisfactory contributions from multiple players, they must continue to play at this level, if not at a higher level, for the remaining half of conference play.

Tonight’s nationally televised home game against the Marquette Golden Eagles by far has the most at stake in conference play at this point in the season. The Golden Eagles are ranked No.1 in the Big East with an 8-1 conference record, so a win for the Blue Demons in this match up would have them tied with the Golden Eagles at the top of the conference rankings for the regular season crown.

Equally important, both teams have won eight of their last 10 games and have momentum. “We know that we’re playing for the Big East regular season championship one game at a time, and Marquette’s just the next game,” Bruno said.

One of DePaul’s two losses fell to the hands of the Golden Eagles. In a 93-81 loss in Milwaukee on Jan. 4, the Blue Demons got off to a slow start, trailing 19-4 just minutes after tip-off.

As a result, the Blue Demons want to get off to a much better start this time around. “It’s really important for us to come out and get a quick start and really get ahead in the beginning,” Campbell said.