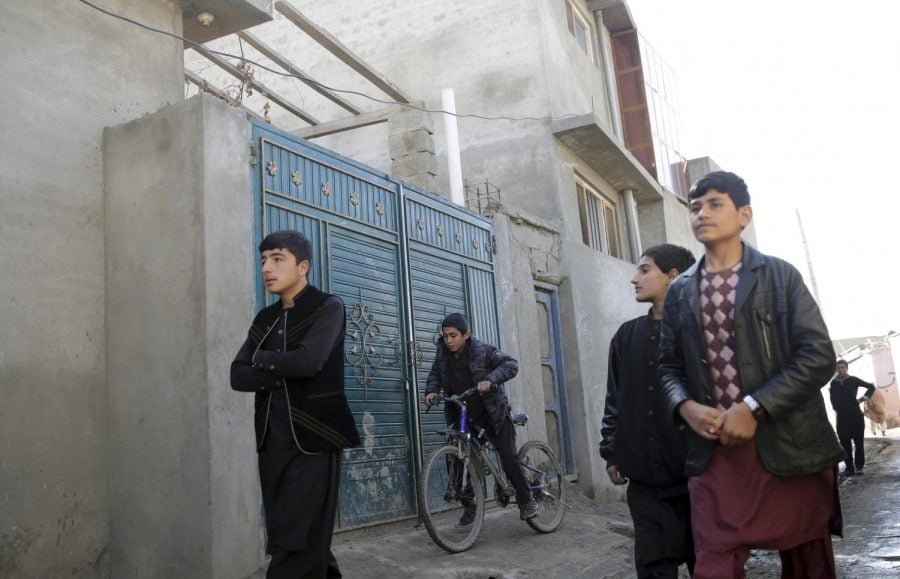 Two French military helicopters on a training flight crashed Friday in the woods of Provence from an apparent mid-air collision, killing the five people aboard, officials said.

The crash occurred between the small towns of Cabasse and Carces in the picturesque southern French region of Var, 50 kilometers (30 miles) north of Saint-Tropez.

A police official said the two aircraft collided. However, prosecutor Xavier Tarabeaux said cautiously that a collision was the working hypothesis “without yet being able to determine where this collision took place and the exact conditions that led to it.”

Police cordoned off roads around the crash site, and some three dozen police and military officials were dispatched to the scene, according to a local gendarme.

The prefect of the Var region, Jean-Luc Videlaine, said three experienced army flight officers and two trainees were killed. There were no survivors.

Debris scattered across two large zones, but the area is uninhabited and no one on the ground was hurt, said the gendarme, who wasn’t authorized to be publicly named.

A spokeswoman for the French army said the helicopters came from the army’s light aviation school based in nearby Le-Cannet-des-Maures. The school includes a special joint training program with German military pilots, and its pilots are sometimes used for firefighting operations in the area.

French Defense Minister Florence Parly visited the school “to share the very charged emotions” and “bear witness to my sadness, pain and my solidarity.” President Emmanuel Macron, in Senegal on Friday, conveyed his “deep respect” for those killed.

House Republicans on Friday released a partisan and bitterly disputed memo that they say shows surveillance abuses in the early stages of the FBI’s investigation into the Trump campaign and Russia.

The memo, prepared by Republicans on the House intelligence committee, says there was “a troubling breakdown of legal processes” in the Russia investigation.

President Donald Trump, who advocated for the memo’s release over the fierce objections of the Justice Department and the FBI, told reporters the document shows “a lot of people should be ashamed of themselves.”

The memo, which the FBI has said is inaccurate and missing critical context, asserts that current and former FBI and Justice Department leaders signed off on a surveillance warrant to monitor communications of a former Trump campaign associate.

The document also asserts that opposition research, conducted by a British spy and funded in part by the Democratic National Committee and Clinton campaign, formed a critical basis for the allegations contained in the warrant application.__

The release of the memo is likely to further divide Trump and his FBI and Justice Department leaders, and the president lashed out anew on Friday morning on Twitter. He has supported the memo release in apparent hopes that it could help undermine the probe being led by special counsel Robert Mueller, which he has called a “witch hunt.”

“The top Leadership and Investigators of the FBI and the Justice Department have politicized the sacred investigative process in favor of Democrats and against Republicans – something that would have been unthinkable just a short time ago. Rank & File are great people!” Trump tweeted.

Democrats say the memo cherry-picks intelligence in an effort to smear law enforcement investigating whether Trump associates collaborated with Russia to sway the 2016 presidential election.

The document was written by GOP lawmakers as part of an effort to reveal what Republicans say are surveillance abuses by the FBI and the Justice Department early in Russia investigation before special counsel Mueller was appointed to take it over.

The House intelligence panel voted along party lines Monday to put the memo out, giving Trump five days to reject the release under committee rules. But Trump also had the power to declassify the document himself.

Democrats on the intelligence panel made a last-ditch effort Wednesday evening to stop the release, saying the memo had been “secretly altered” by the Republicans who wrote it. In a letter to the House Intelligence Committee Chairman Devin Nunes, Schiff wrote that committee Democrats had discovered changes that were made after the vote Monday

Trump has been telling confidants in recent days that he believed the GOP House members’ document would validate his concerns that the FBI and Justice Department conspired against him. The president also has told allies that he believes the memo bolsters his claim that accusations of collusion between his campaign and Russian officials are false and part of a conspiracy to discredit his election.

The discovery of an Islamic State hideout filled with explosives and suicide vests in a poor Kabul neighborhood reflects the failure of Afghanistan’s corruption-wracked government to protect the capital, analysts and residents said Friday.

This week’s revelation that militants were operating in Kabul’s western Qala-e-Wahid district follows a recent series of horrific attacks in the heavily guarded city that killed nearly 200 people and wounded hundreds more, including foreigners.

Security forces were led to the safe house by an insurgent who was captured during an attack Monday by IS militants on a military academy in Kabul in which 11 soldiers died, according to an intelligence official.

From behind the 10-foot green metal doors, the insurgents were plotting to use the explosives, weapons and suicide vests in three more large attacks in Kabul, the official said. He spoke on condition of anonymity in line with his agency’s rules and did not elaborate on the plans.

Political analyst Haroon Mir blamed widespread corruption throughout the government and the security forces for their inability to prevent the recent deadly attacks in Kabul, which included a siege at a luxury hotel and a car bomb packed inside an ambulance.

The streets that weave through Qala-e-Wahid are rutted and ankle deep in mud. A wide open sewer runs the length of the lanes, clogged with garbage bags, mounds of trash and human waste.

Afghan security forces, aided by the U.S.-led coalition, have been targeting suspected IS hideouts in Afghanistan’s eastern Nangarhar province, where the militants are believed to have established their most extensive bases.

The deteriorating security can also be blamed on the protracted feud between Ghani and powerful warlords, including Dostum, who currently is in Turkey and prevented by the government from returning to Afghanistan.