The transparency of Trump’s lies 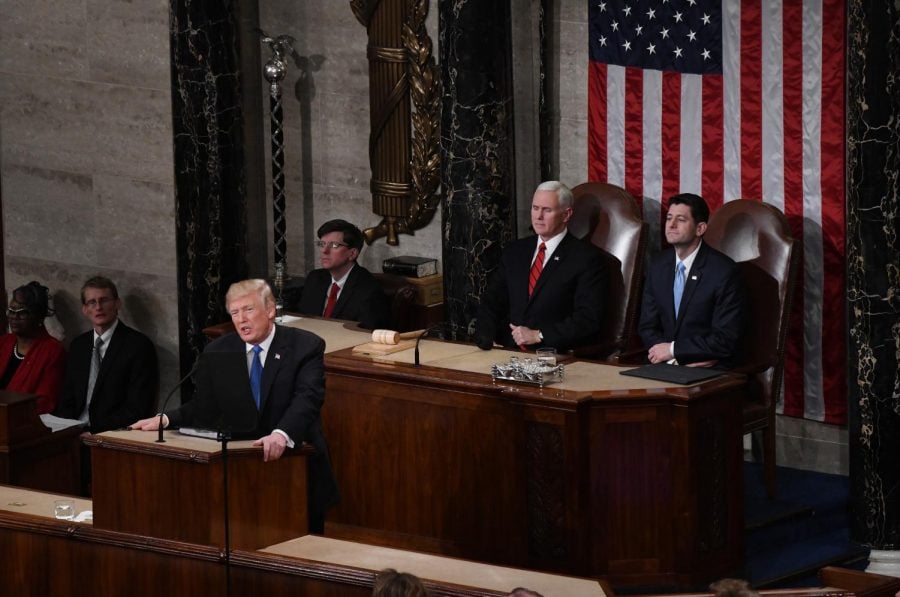 President Donald Trump delivers his State of the Union address, and Vice President Mike Pence and Speaker of the House of Representatives Paul Ryan sit behind him. (PHOTO COURTESY OF Tribune News Service)

On Jan. 30, President Trump delivered his first State of the Union address. Trump tackled taxation, unemployment, immigration, foreign policy and other topics in the 90-minute speech. News outlets were quick to release fact-checks of the information stated by Trump, with the New York Times citing 15 different falsifications or misleading/out-of-context claims.

On Thursday morning, Trump tweeted some more questionable statistics when he reported that his speech was the most watched State of the Union of all time with 45.6 million TV viewers tuning in. He blatantly lied, as George Bush’s 2003 address had the most TV viewers with 62 million, according to Nielsen. Though these numbers only reflect TV views and not online streams, the facts show the president spreading the fake news he is infamous for calling out.

In a realistic world, the president’s outright lies would create serious public discourse on his authority as the bearer of this news. But this is America, and Trump’s lies come with the citizenship. Trump gets to tell the narrative he prefers, no matter the circumstance.

“Trump screws up words in his speech all the time, but for Trump, it’s not a mistake,” Trevor Noah said on The Daily Show the night of the speech. “For him, it’s just an opportunity to redefine reality.”

A major theme of his speech was, unsurprisingly, to make America a great country for all Americans. To do this, Trump vowed to repeal the visa lottery that “randomly hands out green cards without any regard for skill, merit or the safety of American people.” This is a falsification in its entirety, as applicants to the visa program undergo many proceedings just to be considered for the lottery. Applicants must meet education and work requirement in order to apply for the program and then to be chosen for the visa, according to Politifact. As well, they are required to receive an extensive background check by the government including checks of their criminal records and mental health status.

“It’s not significant,” says Sheridan Stones, 21-year-old Trump supporter. “No offense, but it’s more of a misinterpretation. He isn’t lying when he says dangerous people get let into this country because of the visa lottery.”

Immigrants don’t benefit from Trump’s or his supporters’ condemning the speech. Those who enter the country with a visa are extensively tested for their potential in the U.S., yet the president consistently downplays their efforts. Americans- no matter the country they are originally born in- have the ability to create greatness if their commander in chief gives them with the recognition they deserve.

“Americans love their country,” Trump said. “And they deserve a government that shows them the same love and loyalty in return.”

If Trump really believed this, he wouldn’t ridicule immigrants for their politicized inaccessibility to the American dream he touts so proudly for white Americans.

The address played off American’s basest emotions towards immigrants by introducing Evelyn Rodriguez, Freddy Cuevas, Elizabeth Alvarado and Robert Mickens, two sets of parents whose teenage daughters were killed by a gang-related incident. The people who killed them entered the country via a loophole that allowed them to enter both the U.S. and the victims’ high school. This strategic presentation of the “bad side” of immigration perpetuates the Trumpian bigotry many of his supporters choose to ignore. Even his mention of the African-American unemployment rate being the lowest to date but after the camera cuts to a shot of African-American soldiers looking stone-cold and displeased, this effort proved baseless.

While his statements about America’s greatness seemed superfluous, for the most part they were a softening reminder that Americans do good all the time. This is an easy concept to let slip away given, for lack of a better phrase, the tragic meme-worthiness of his campaign slogan Make America Great Again.

“Americans fill the world with art and music,” Trump said. “They push the bounds of science and discovery, and they forever remind us of what we should never ever forget: The people dreamed this country. The people built this country. And it’s the people who are making America great again.”

These closing sentiments were powerful, but they leave a sour taste in the viewer’s mouth given some of Trump’s other comments. Earlier, Trump made a statement regarding American-born undocumented immigrants brought to the country by their parents, who he referred to as Dreamers. Trump said “all Americans are Dreamers”, white-washing and invalidating their struggle as Americans. Is this a new “All Lives Matter” moment, as Trevor Noah put it? Americans dream, but calling them Dreamers in this context belittles the trials of an undocumented immigrant, something a natural-born American cannot understand.

Trump’s lies call attention to his laissez-faire attitude towards how the American people view their leader. Instead of improving his approval rating, currently at 40.2 percent as of Feb. 2 according to the aggravated poll from FiveThirtyEight, Trump can’t be concerned if his lies affect his authority. His concern is keeping immigrants out, no matter the cost.