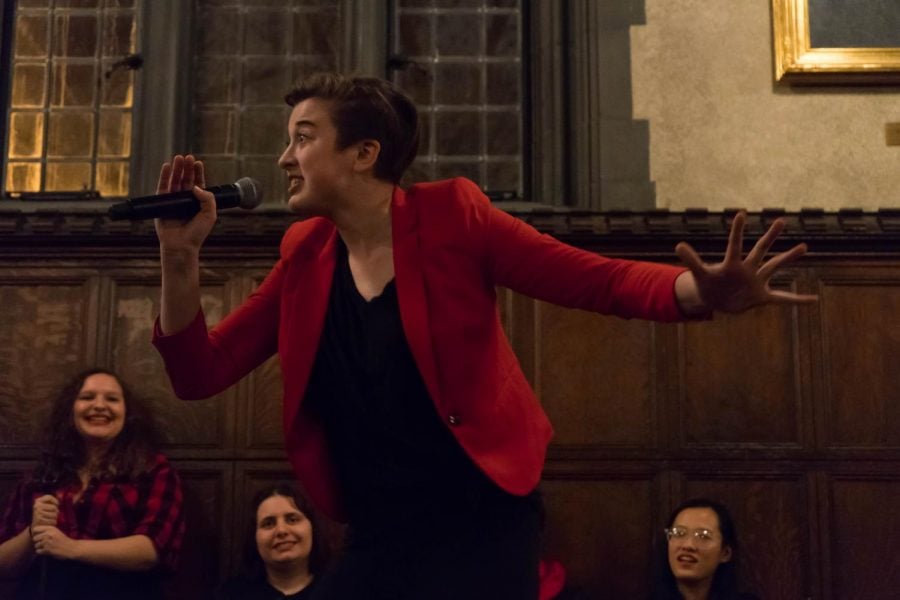 Christian Borkey in an energetic performance for the piece “My Angry Vagina.” (Photo courtesy of Connor O'Keefe)

DePaul’s 19th annual performance of the episodic play “The Vagina Monologues” kicked off with laughs, cries and reverence on Feb. 8 and ran through Feb. 11. The play, written by Eve Ensler in 1996, highlights the adversities people with vaginas face such as sexual violence, abuse, manipulation, medical malpractice and marginalization.

This year’s performance focused less on the sexual aspects of vaginas that were the focus of the original play and presented more of an engaged dialogue for people with and without vaginas. The original play has been criticized for catering to cisgendered women with the exclusion of people elsewhere on the gender spectrum who possess female genitalia.

Directors Julie Peacock and Anna Freed strove to promote an inclusive environment for audience members and performers alike. They split the performances into three categories of “Sex”, “The Body” and “Identity”, in order to put less emphasis on vaginal sex in favor of exploring the social, racial, emotional and economic implications of having a vagina.

“We wanted to make sure we were able to focus on more than just sex and being sexual, because there is so much more to gender, identity and even genitalia than just sex,” Peacock said.

Opening up the conversation for sometimes unsettling topics in a setting like this paves the passageway into public discourse.

“Obviously vaginas need to be talked about more, but nobody really thinks about the birth aspect and going to the doctor and the medicalization of people with vaginas,” said Albie Sher, a performer in the show.

Her monologue, “I Was There in the Room,” tells the story of a grandmother watching her grandkid give birth. Society’s conversations of childbirth are seldom, and many find uneasiness and embarrassment in them. Graphic and brutal, the monologue compares the resilience of the vagina to a heart that expands, sacrifices and forgives while discomforting the audiences with its explicit and brutal imagery of the operating room during childbirth.

“I’ve never really been interested in (the conversation of childbirth) myself, but I think talking about it from the perspective of a third-party person and seeing everything it can do and relating it to the heart was super cool because personifying a vagina, it’s able to do all these things to bring life …  it’s really powerful,” said Sher.

Peacock and Freed set out to do just this. Opening up the conversation for sometimes unsettling topics in a setting like this paves the passageway into public discourse.

From there, the performance transitioned to moving and sentimental topics. An emotionally charged performance by Rachel Pride called “My Vagina is a Disease” altered the narrative from sex and body representation to the historical medical malpractice perpetrated on people with vaginas. Beginning with the hypocrisy of the “female hysteria era” of the 19th century, this episode examined how women, who were seen as pure and asexual until their husband wanted to have sex, ignited in crazed fits of depression, anxiety and sexual desire, were frequently raped by their male doctors when treated for the nonexistent malady. The performance discussed the lack of better quality medicines and doctors for those of lower socio-economic status and in black, Latinx and Native American communities.

Some monologues expressed the anger of having a vagina in a social context. Christian Borkey’s performance of “My Angry Vagina” was energetic and passionate about the adversities of having a vagina, such as the absurdity of tampons and Pap smears.

“She wants to live freely and without having to think about how goddamn ridiculous the world is,” said Borkey about their character. “Even though the monologue is super funny, there’s a layer of sadness that’s under there throughout the whole thing.”

Using comedy to speak about how tired and sad she is, the writer’s ideas more deeply affect the audience, and Borkey. For them, humor acts “as sort of a barrier or mechanism” to cope with the challenges of having a vagina.

This year’s performance is the first since the death of Adrian Fraser, a cast member in the 2017 lineup who died two nights before his performance of “My Mangina,” his original monologue that illuminates his struggles with transitioning. The piece was performed passionately by Oliver Sterling-Angus for the first time in front of an audience.

“They’re two very different people (Fraser and Sterling-Angus), but it was really powerful to see him perform,” said Sher. “The first time he did it, there was no one who wasn’t crying.”

The show became a commemoration of  Fraser’s life and memory. Hearing his story became the highlight of the night, reminding the audience and cast members that a single voice can raise awareness of the deeper, psychological issues of people with vaginas, apart from their sex-related issues.

The newly framed mission statement of DePaul’s Vagina Monologues fits well into the recent discourse of a post-Weinstein world. The inclusivity of this year’s performance encourages people with and without vaginas to stand in solidarity against those who have told the masses what a woman is and isn’t.

“The play shines a light on the unseen torment that people with vaginas often face in the workplace, especially when they are marginalized by powerful people within their industry. As the playbill states, “Woman isn’t vagina and vagina isn’t woman.” It’s a strong reminder that cis women aren’t the only ones facing discrimination over their anatomy.