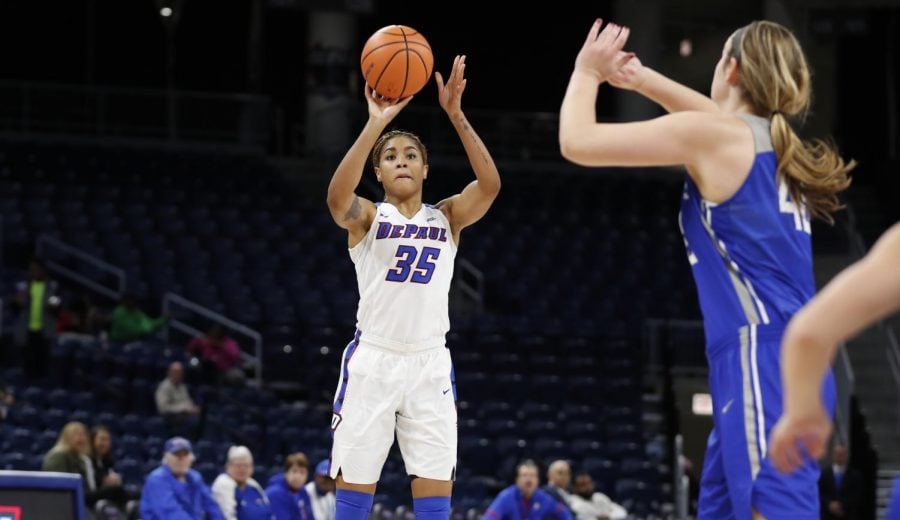 When the DePaul Blue Demon women’s basketball team practices again at McGrath-Phillips Arena they may present a fire hazard at the facility because the team is on such a hot streak right now.

With a 73-72 victory over the Xavier Musketeers (9-17; 2-13) in Cincinnati on Sunday afternoon, the Blue Demons (20-6; 12-2) have extended their winning streak to six games as they continue to sit firmly in first place in the Big East Conference standings. The previous five wins were all by double digits and the average margin of victory was 18 points. The final score in the win against Xavier on Sunday afternoon was a bit closer.

With time expiring, Xavier sophomore guard Kindell Fincher buried what everybody in the building thought was a 3-point field goal. But, after a review, the officials determined her foot was on the line, it changed from a 3-point field goal to a 2-point field goal, and the Musketeers found themselves down by one point instead of tied with no time remaining on the clock.

It was a fitting ending to a competitive game that featured nine lead changes and four ties. Although Xavier led for 28 minutes of the contest, DePaul held a 67-61 advantage with 5:44 remaining in the game. Xavier responded with an 8-2 run to tie the game with 1:55 remaining, but the Blue Demons went 4-for-4 from the free-throw line down the stretch and then survived the Fincher jumper late to pull out their 20th victory of the season. This is the 11th-consecutive season that the Blue Demons have accumulated 20 or more wins and the DePaul women are well on their way to making their 16th consecutive NCAA tournament.

Campbell led a Blue Demon assault on the boards that was the difference in the game. The Blue Demons brought down 18 offensive rebounds to the Musketeers four, and outscored Xavier in second-chance points 15-1.

The Blue Demon women return to action on Friday to take on the Georgetown Hoyas. The game begins at 7 p.m. at McGrath-Phillips Arena. The Blue Demons beat the Hoyas 78-62 on Jan. 21 which began their current winning streak.