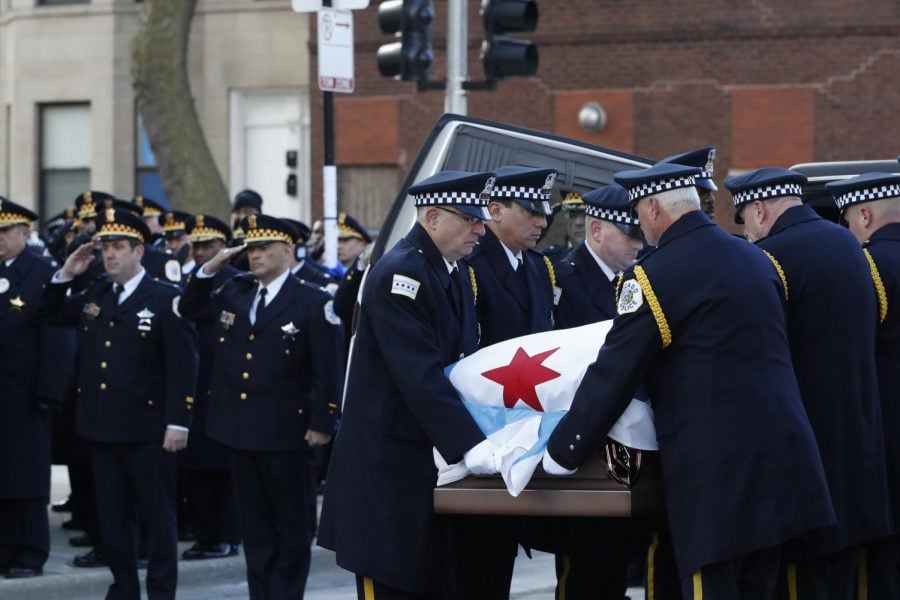 Bauer’s remains, wrapped in a Chicago flag, are carried into a Bridgeport church by CPD leadership. (Photo courtesy of the Associated Press)

Benjamin Conboy and The Associated Press

On Feb. 13, Chicago Police Commander Paul Bauer was at the Thompson Center at 100 West Randolph Street for training when he heard officers call for assistance in apprehending a fleeing suspect. Noticing the subject running by his squad car, the commander gave chase.

Bauer, 53, chased the suspect, Shomari Legghette, up a stairwell, where the two struggled. Legghette, a four-time felon drew a handgun and fired seven shots, mortally wounding Bauer, according to The Chicago Tribune.

A 31-year veteran of CPD and commander of the Near North Side police district, Bauer was remembered for being a brave leader who the rank-and-file held in high esteem.

Bauer’s name joins more than 580 others from CPD who have died in the line of duty.

The wake and funeral were held on Friday and Saturday, respectively, near his home in Bridgeport, where Bauer also grew up.

Surviving Bauer is his wife, Erin, and his 13-year-old daughter, Grace.