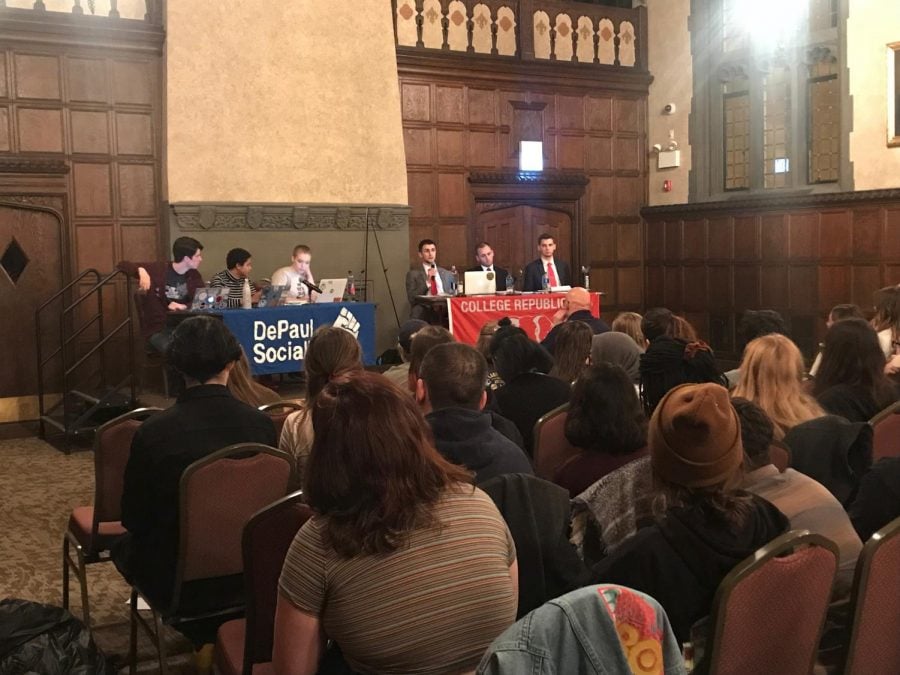 The DePaul Socialists challenged the DePaul College Republicans to a public debate after controversial author Charles Murray spoke on campus in November 2017. (Amber Colón | The Depaulia)

In an evening rife with political disagreements, perhaps nothing was as shocking as DePaul College Republicans member Brenden Newell’s comments towards the end of Tuesday’s debate between the Republicans and DePaul Socialists.

“I would’ve rather had a person (in office) who mildly sexually assaulted a woman than another woman who defended her husband after he raped innocent women,” he said in response to a question about the #MeToo movement.

That controversial response capped off a tense evening that saw plenty of activity on social media and a politically-divided audience cheering and booing for and against their favorite sides.

While Newell turned down a request for comment after the debate was over, College Republican chairman John Minster said that he enjoyed playing “rhetorical gymnastics” and the moments when it got “hostile” — referencing the question about #MeToo.

“Every time you’re having very heated arguments, and arguments where they’re foundational to what you think and how you think and view the world, and someone is directly challenging you in that and telling you that’s wrong, people can get a little bit upset sometimes,” Minster said. “But usually it can be productive and I think it was here tonight.”

The debate came several months after the Republicans invited controversial “Bell Curve” author Charles Murray to a speaking event at the Commons, which resulted in a large walkout and protest. In the days following the event, the Socialists ran a statement in The DePaulia urging the Republicans to agree to a public debate.

“We wanted to expose the racism of bringing Murray to campus,” Mulroy said after the debate.

Finally, Tuesday became the night that the event happened. Students packed into Cortelyou Commons to watch the groups go head to head.

The panel was moderated by political science professor Wayne Steger.

Steger reminded students to hold their applause, refrain from booing and remain respectful, but students on both sides of the room ignored the instructions.

“I love to see students involved in politics regardless of political affiliation,” Steger said before the event kicked off. “It shows your interest and that’s what matters. It’s the beginning of citizenship and it’s what’s going to make our country great. Always.”

Both groups started off the night with introductions and opening statements, which were prepared prior to the event along with the answers to the debate questions.

Audience members also were allowed to submit their own questions.

The first question of the night asked each group to define their respective beliefs. Mulroy took the microphone first.

“We live in a world of staggering inequality and oppression,” Mulroy said. “Over the last year the one percent have raked in four out of every five dollars in new wealth, and the bottom 50 percent of the world’s population — 3.7 billion — inherited zero.”

Mulroy went on to speak about how his group’s socialism rejects racism, sexism, transphobia and xenophobia.

“Under capitalism a few can maintain their work because others are made poor,” Mulroy said to applause from the left side of the room.

Next, Minster took the microphone and used the objects sitting in front of him to begin his argument.

“This water bottle is capitalism. This cell phone that we use to keep time is capitalism,” Minster said. “Capitalism provides the system with which we live through today.”

“Capitalism is the best way to go. Ultimately, it’s a system of rational self-interest and mutual transaction that’s been at work for the past two thousand years,” Minster said to applause from the right side of the room.

She argued that 29 congressmen on both sides of the political spectrum are currently facing allegations of sexual assault, lending urgency and importance to the #MeToo movement.

In response, Gricus pointed to a graph that the Republicans had prepared ahead of the debate.

It showed data from the Women’s Bureau of the U.S. Department of Labor. Gricus said the graph showed that since 1918, with the spread of globalism, women have entered the workforce at higher numbers than ever before.

“This goes to show how women have advanced and made gains that have never been made in any other society,” Gricus said. “That’s something that is a direct product of capitalism.”

The Socialists asked the Republicans to respond to their prompt once again as they felt that their original question about impeachment was not addressed.

That’s when Newell replied that he would have rather “had a person who mildly sexually assaulted a woman than another woman who defended her husband after he raped innocent women.”

His comment was immediately met with boos from both sides of the audience.

Both groups were pleased with the outcome of the debate and said that they would be open to holding more in the future.