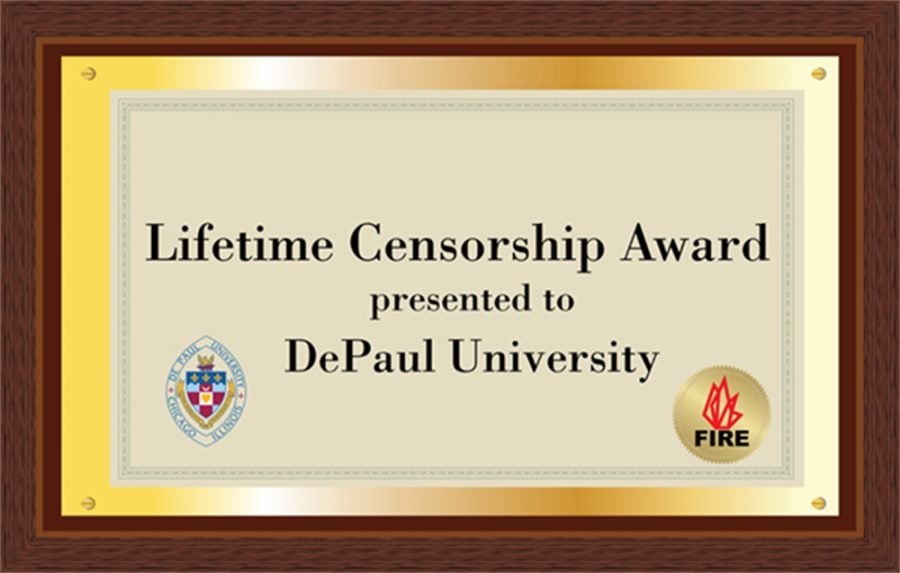 DePaul has found itself in the spotlight for receiving an award from the Foundation for Individual Rights in Education (FIRE) — only this award isn’t the type most universities hope to win. FIRE awarded DePaul the inaugural “lifetime censorship award” for, what they say, is a pattern of attacking free speech on campus.

President Gabriel A. Esteban was asked Thursday if he thought it was fair that DePaul received the lifetime censorship award from FIRE.

Esteban said that there is a “clear process for speakers to be approved” and that he strongly believes in free speech.

Less than a week after receiving the undesirable award, the university denied DePaul’s chapter of the Young America’s Foundation (YAF) from bringing Steven Crowder on campus.

Crowder is a conservative political commentator who hosts a popular online show called “Louder with Crowder.” He is known for creating videos on college campuses where he engages students in dialogue over controversial topics. He calls the segment “Change my mind.” Topics range from denying male privilege, to stating that there are only two genders.

After repeated requests across multiple platforms, Crowder did not respond to requests for comment.

“The Speaker Review Board denied this speaker request due to their research on Mr. Crowder and came to the conclusion that he creates videos to purposely rouse and provoke people by making fun of the opposing side. They didn’t see how this aligns with DePaul’s educational mission,” wrote the administration in a letter to YAF.

The board was created in response to the infamous Milo Yiannopoulos incident of 2016, where Black Lives Matter protesters attacked the conservative provocateur on stage. Yiannopoulos was not allowed to be rescheduled to speak due to what DePaul cited as security concerns.

Peggy Burke is the chair of the board and said that the board made an administrative error concerning their recent decision to deny YAF’s request to have Steven Crowder speak on campus.

Burke said that because of this error, YAF is being granted the opportunity to present their case during the next meeting of the speaker review board in March.

Burke said that the decision made at the March hearing will be final. There is no appeal process for student organizations once their speaker is denied. Burke said that when the guidelines were drafted, it was deemed to be unnecessary.

“If there is no new information, it was not deemed valuable to have yet another set of eyes on the same request,” she said.

Burke said that the award from FIRE was unfair and that DePaul has allowed “a number of speakers on campus.”

“I completely disagree with that assessment,” she said.

Nahal Hashemian is a student member on the board and said that denying Crowder was “within the board’s rights” because the board followed their guidelines.

“There are prior things that have occurred that have made students uncomfortable,” she said.

Hashemian said that she didn’t have the specifics concerning Crowder, but ultimately the board felt Crowder “might not reflect well on what the university’s intentions are.” She said that it is never the board’s intention to deny a speaker and that they do everything possible to approve speakers.

“Steven Crowder is not the type of person that should have been rejected by the board,” he said.

Burkhart believes that the administration’s personal feelings have played a role in the rejections. He said that it seems like conservative viewpoints at DePaul are under attack because they are unpopular with the student and faculty majority.

“It’s really obvious at this point that conservative speakers and student groups are being discriminated against,” he said.

Burkhart said that his group does not invite hate speech to DePaul, but that it shouldn’t matter because free speech should never be stifled on a college campus.

“In order to become more educated you have to experience disputes between different points of view,” he said.

Burkhart mentioned that there are plenty of left-leaning groups on campus that, he says, have been outright vulgar and disrespectful but are still allowed to operate with impunity.

“You have the feminist groups posting pictures on social media of them flipping off Father Holtschneider,” he said. “I completely believe they have the right to do that, but it feels like a double standard.”

YAF has done nothing to incite violence or promote hate speech, according to Burkhart. He said that organizations like FIRE have been instrumental in continuing to champion the free expression of ideas on college campuses.

Adam Steinbaugh, senior program officer at FIRE, said it was an easy decision for his organization to choose DePaul as its flagship university to receive the inaugural lifetime censorship award.

“DePaul has been on our list for some time,” he said. “At this point, we felt that DePaul deserved some greater recognition to the extent that it promises free speech but fails to deliver on those promises.”

Steinbaugh said that it isn’t just conservative groups being attacked at DePaul. He mentioned an incident in 2016 when the university required the DePaul Socialists to have security at a Marxist book discussion because of its potential to incite violence.

“While there is expression that you or I might agree is hateful, it’s not the university’s place to say that it is unacceptable,” he said. “That is for the students to decide.”

Chris Bury is a Peabody and Emmy award-winning journalist and professor at DePaul. He said that freedom of expression is crucial at a university.

“I think that a university has got to uphold the first amendment in the purest way that it can,” he said.

Bury said that if speech has a reasonable chance of inciting violence, universities are well within their right to step in. But, that doesn’t mean banning hate speech, he added.

“I think that uncomfortable and even hateful speech has to be tolerated under our system,” he said.

Both Steinbaugh and Bury mentioned the University of Chicago as a university that has “done things the right way” when it comes to free speech on campus.

Recently, the University of Chicago (U of C) has come under fire for allowing former White House Chief Strategist, Steve Bannon, to speak on campus. No date has been set for Bannon to speak, but a group of alumni and community members have already penned letters of protest to the university.

U of C issued a statement that said they are “deeply committed to upholding the values of academic freedom, the free expression of ideas, and the ability of faculty and students to invite the speakers of their choice.”

The DePaul Journalism Department hosted esteemed journalist and national correspondent with “PBS NewsHour,” John Yang, on Thursday. At the luncheon, Yang said that he tends to believe that incendiary speakers should still be allowed to speak at college campuses.

“I was very bothered by the idea that protests could stop commencement speakers,” he said.

Although Yang said he couldn’t comment on the specifics regarding Crowder, he said he would “err on the side of allowing him to speak.” Yang did say that, lately, things have gotten more confusing regarding hate speech.

“I used to believe that good ideas drive bad ideas out of the marketplace, but I don’t know anymore,” he said.

“At the end of the day hate speech is what goes against the Vincentian mission. Our No. 1 priority is that human dignity must be upheld at all costs,” she said.

John Minster is the president of the DePaul College Republicans and has been very active when it comes to promoting free speech at DePaul. He said the award comes as no surprise.

“I think it’s par for the course for DePaul,” he said. “It makes perfect sense.”

Minster said that DePaul has been violating student speech rights for over a decade, but it has “particularly accelerated” in the last two years.

“As a private university, (DePaul) is allowed to prevent speakers,” he said. “But that doesn’t mean that they should.”

At the next meeting of the Student Organization Speaker Review Board in March, DePaul will reevaluate whether Crowder will be allowed to speak. No matter the decision, the university will make a powerful statement on exactly where they stand when it comes to free speech.