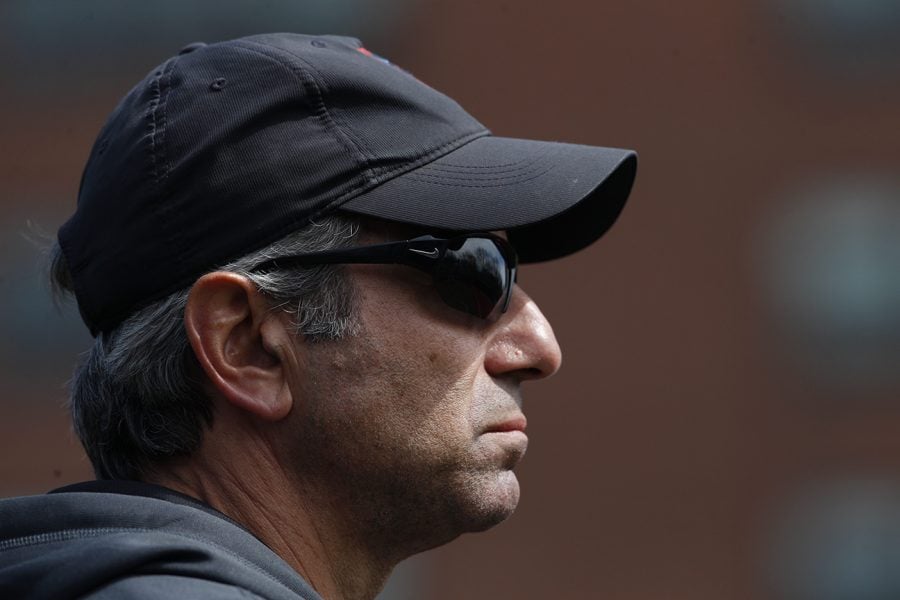 DePaul improved to 11-3 overall with a 3-1 weekend at the UTA Maverick Tournament. (Photo courtesy of DePaul Athletics)

It’s a milestone that places him fifth all-time in and fourth among active coaches in NCAA history. The feat was reached last week during the Cougar Classic in South Carolina, when the team ended the tournament with a 3-2 record after closing out with a 1-0 victory against Presbyterian.

This year’s team has won eight of their first 10 games of this season so far, and after this weekend’s games at the UTA Maverick Tournament in Arlington, Texas, the team now has an 11-3 record.

“We think this is gonna be one of our better years as long as we stay healthy and everybody stays focused,” Lenti said. “We’re really encouraged by the way we’re playing defense and pitching, and we know the offense is gonna come along. We’re really excited about this team because it is a very talented team. It’s a team with a lot of depth.”

Lenti said that the career accomplishment is definitely one that he is proud of, but he also stressed that it is largely due to the support the team has from the university.

“The attention is on me, but it’s not about me. It’s really about all the great players we have playing at DePaul,” Lenti said. “All the coaches we’ve had coach with me at DePaul and the support from our administration. You don’t get these things done without an administration like we have here.”

Lenti also credits his players  over the years, as they are the ones bringing in the wins and performing at a  level that allows them to achieve so many victories.

“With having such a successful career as a coach, his standards are very high for us and he pushes us everyday so we can achieve, as he would not say, not perfection, but excellence,” said junior infielder Alysia Rodriguez. “He knows what we’re capable of achieving and tries to push us to that limit everyday.”

Just past the giant blue balloons blocking Lenti’s windows sit both Wish Field and Cacciatore Stadium, where the DePaul soccer and softball teams practice and play their home games, respectively. Lenti spoke of a time when the field was completely different from how it looks now.

According to Lenti, the space used to be a parking lot with a small, grassy field and several large trees. At that point the Fullerton CTA stop was functional and trains were running daily, but the Purple Line hadn’t even been conceptualized.

Lenti first got involved with the DePaul softball team as a junior in college when he became a student manager. He was allowed to coach third base and create the lineup for his last two years at DePaul, where he studied English. After graduating, he taught at St. Francis de Sales High School on Chicago’s East Side, where he also coached football and boys basketball.

The head coach at the time was an administrator who didn’t know much about softball, he said, so his background in baseball proved to be a plus.

“But it wasn’t a big deal,” Lenti said. “I mean, softball collegiate sports was nothing like it is today. We shared uniforms with some of the other teams on campus. We had just a couple of bats. We had very little equipment, and we didn’t have a field.”

The team used to practice every occasionally at Oz Park, on a small dirt infield covered with rocks on the southwest corner. Today the field sits on the northwest corner, but that’s not something the team has to worry about now that they have their own space.

Lenti acknowledged that the team could be doing much better offensively, and that he has been taking the time to address the parts of the game that are not physical.

“Being better as an offensive team isn’t really about the physical part of the game so much as it is about the emotional and the mental (parts of the game),” Lenti said. “We have in-depth conversations about where we feel we need to get better.”

Pitcher Megan Leyva said Lenti’s willingness to approach the tough mental and emotional sides of the game have helped her “take that toughness into my real life.”

In fact, a large part of Lenti’s coaching style includes checking in with athletes about their academics and personal lives.

“(Lenti) is constantly checking in on how we are doing and requires us to take time to study on the road and meet weekly with the coaches to discuss our grades,” said outfielder Brianna Viles. “This has helped me to hold myself even more accountable with my academics.”

Throughout Lenti’s career, the DePaul softball alumni he’s coached have moved on to become accountants, doctors, realtors and more. He even coached his daughters here; one is now an accountant and the other is a student in medical school.

“The fact that they leave here better people and they’re going out to make their mark in the world is, to me, the most satisfying thing beyond all the wins,” Lenti said.