Defense wins championships, and now the NBA All Star game? 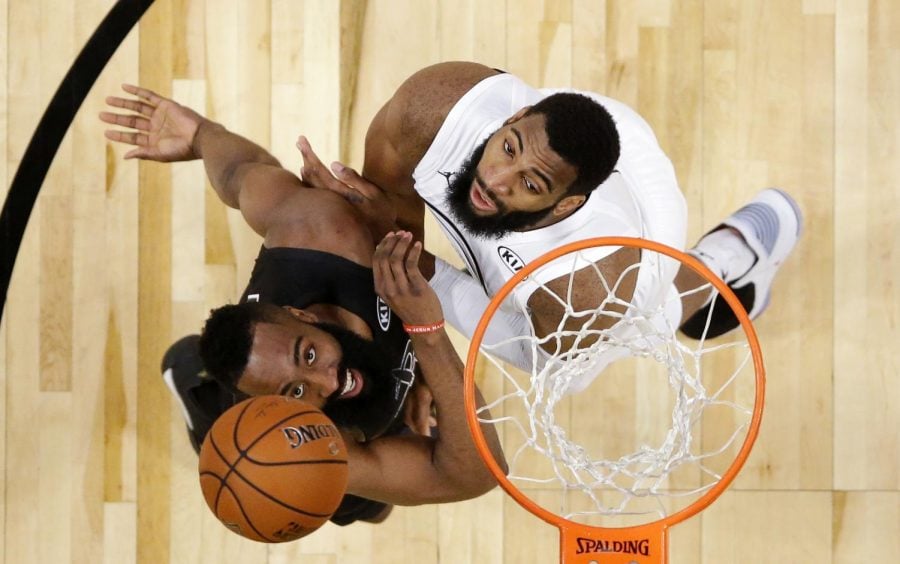 Two players, Team Stephen's James Harden, left, from the Houston Rockets and Team LeBron's Andre Drummond form the Oklahoma City Thunder, go for a rebound in the second half of the NBA All-Star Game on Feb. 18. (Photo courtesy of AP Newsroom)

The 67th edition of the NBA’s annual All-Star Game concluded the same way it began — in unfamiliar territory. Unlike the previous 66 contests, which pitted the Eastern Conference against the Western Conference, these rosters were determined by an entirely new process: an All-Star draft. A strong defensive possession on the game’s final play gave Team LeBron a 148-145 victory over Team Stephen. What had recently become a stale exhibition should now be considered must-see television.  And the best part?  This new format is only the beginning.

“It was a move that was needed to generate fans’ interests back in the game,” said graduate student Gavriel Wilkins. “I think that it helped raise the ante for the players in the process.  Which made the game that much more competitive on Sunday night.”

The usual 24-roster spots still featured 12 players from each conference.  Once the voting concluded, the top vote getter in the East (James) and the West (Curry) were designated as team captains.  Behind closed doors, those two players then “drafted” the remaining 22 All Stars.

The next step for the NBA would be to televise the draft.  Adam Silver, the league’s commissioner, told ESPN’s Ramona Shelburne that’ll likely happen in 2019.

“I personally liked the changes,” senior Meghan Waldron said. “Both teams seemed like they wanted to win, which is great for entertainment. There is nothing better than watching the best in the world compete against each other.”

Much like the NFL Pro Bowl, the NBA All-Star Game has diminished in relevancy as of late.  Aside from the honor of being selected, there’s very little incentive when it comes to playing in the actual game.  It’s a glorified exhibition, and the quality of play tends to be mediocre.

But the fact that a change even had to be implemented in the first place has turned some viewers off.

“Because of the quality and effort — or lack thereof — in the All-Star game, I have stopped watching the event.  I didn’t even see one play or highlight,” Phil Meyers said.

Meyers is an adjunct political science professor at DePaul University and a basketball analyst with over a decade of experience at Synergy Sports Technology.

“I guess the biggest take-away from my actions is that I find it sad (being a child of the 1980’s) that professional players don’t have the drive to give a full effort on the biggest stage — one that is aimed to celebrate the best of their sport,” he said.

This absence of effort was the main reason the NBA decided to make some drastic changes to their mid-season classic.  Last year, the 2017 game set a record with 374 total points scored between the East and West.  Defense was virtually non-existent that night.

And that’s what makes this month’s game so encouraging.  Not only was there a noticeable rise in competition, but the scoring was much more reasonable.  Both teams combined for 293 points in a regulation basketball game.  That’s plenty of offense, with the right amount of defense mixed in for good measure.