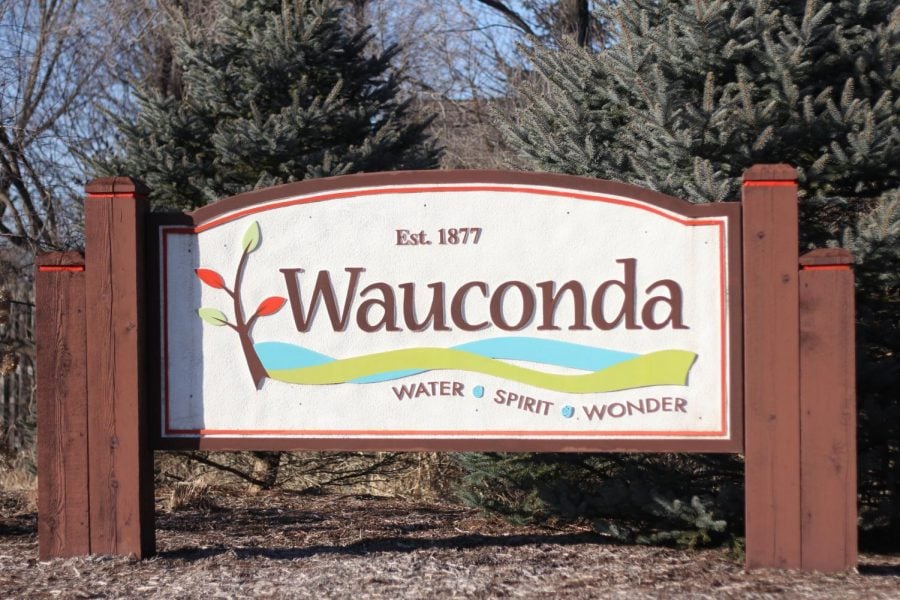 Wauconda is a small Northwestern suburb of Chicago and is home to newfound fame after "Black Panther's" release and the immense success that followed. (Rachel Fernandez | The DePaulia)

Epic plunging mountains, lush valleys with picturesque waterfalls and a highly advanced metropolitan kingdom are all featured in one of the earliest scenes in the Marvel superhero film “Black Panther.” The further into the film you get, the more you see of the fictional African country of Wakanda: a bustling afro-futuristic environment wherein the greatest resource in the universe, vibranium, can be found.

A little closer than Africa and just a short drive outside of Chicago, people casually walk up and down the main street of a small town bordering Bangs Lake. Here visitors can find quaint shops, antique stores and unique restaurants. The days proceed calmly here.

This is the small Northwest suburb of Wauconda. Pronounced exactly the same as it’s cinematic counterpart, this quiet town has received much attention since the film’s release with people from all over the country making the connection between the two locales.

The Village Hall says they have been bombarded with calls from fans of “Black Panther” asking about vibranium or simply screaming “Wakanda forever,” a common phrase in the film. Last month, teenagers ventured through Wauconda in costume as the superhero Black Panther and his primary antagonist Killmonger, and employees in the town were photographed with Black Panther masks on.The town, on the whole, seems to have embraced all the newfound attention.

No matter where you go, you are put at ease and Wauconda natives greet you happily. The shops are welcoming and warm. A group of friends gathered to catch up and knit together in one of the coffee shops and the staff greeted almost every single person by name. Caitlin Wuebben, 27, works at Honey Hill Coffee Company on Main St. in Wauconda. In her opinion, this recognition is beneficial for the town.

“Wauconda is up and coming, so anything to help boost it is great,” said Wuebben. “I love Wauconda, I grew up here, so it’s kind of cool to see everyone get excited over it.”

While this boom in attention is surprising to many, this isn’t exactly foreign territory for the town. Wauconda was once used as a filming location for the 1980 musical comedy “Blues Brothers” and is featured in one of the scenes in the final third of the film. While that was big news for the town at the time, they had a much bigger cinematic moment ahead.

Bulldogs Grill on Main St. is one of the most popular places in town. One wall is filled with a colorful and creative handwritten menu with a variety of options. The rest of the restaurant is covered in Bulldogs, the school district’s mascot, as well as many pictures of the extravagant burgers offered at the Grill. The staff interact with the customers like they’re old friends and the customers happily reciprocate. Tony Vazquez, 28, is the manager of the burger joint, and he says he has definitely noticed the changes “Black Panther” has brought.

“It’s not the first time we’ve been in the movies or mentioned, considering that it was just a weird coincidence that it was the same (name), and then all of the sudden the nation was looking out here,” said Vazquez.

With a new home in the spotlight, Wauconda has the opportunity to capitalize on this publicity and promote what the town has to offer. The qualities of the town are exemplified with the influx of tourists. With more people flocking to the suburb, the hospitality and welcoming energy of Wauconda shines through. DePaul sophomore Ben Burkhardt, 20, is from the Northwest suburb. He sees this opportunity as Wauconda’s chance to finally make a name for itself.

“It is a small town so any chance they get to be more than a small town in the Northwest suburbs, they’ll take,” said Burkhardt.

The record-breaking box office pull for “Black Panther” has yet to stop, which implies that Wauconda’s moment of fame isn’t nearly over yet. The longer the spotlight lasts, the more similarities between the two places come to light.

In “Black Panther” Wakanda presents itself to the world as an agricultural community struggling to stay out of poverty. However, a look beneath the surface will reveal the truly spectacular world within. The same can be said for Wauconda. From what seems like a relatively uneventful suburb, a look beneath the surface will reveal some of the greatest aspects of community that small town America has to offer. Where it falls short in its vibranium supply, it makes up for in true hospitality and warmth.

Additional reporting by Rachel Fernandez and Carina Smith on behalf of the DePaulia Road Trip Team.