With primary elections nearing, candidates ratchet up the attacks 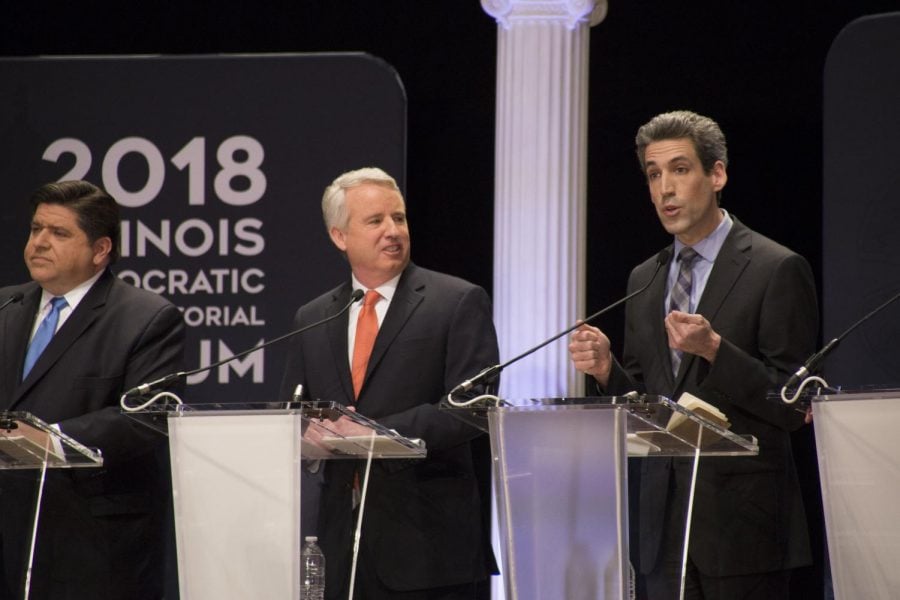 Billionaire and front-runner candidate for governor JB Pritzker (left), is closely followed by Chris Kennedy (middle) and State Senator Daniel Biss (right). Personal attacks have been a big part of the race.

Although six candidates were on stage, three have emerged as the front-runners in a hotly contested and very expensive primary election. J.B. Pritzker, state Sen. Daniel Biss and businessman Chris Kennedy have begun to dig their heels with attack ads and negative rhetoric on Twitter and at multiple debates and forums.

Pritzker, a billionaire venture capitalist and philanthropist with longstanding Chicago connections, is leading in almost all of the most recent polls. To date, Pritzker has spent $63 million of his own money. To put things in perspective, Donald Trump spent $66 million of his own money for his entire presidential race. Pritzker has presented himself as the only candidate who can compete with Gov. Bruce Rauner’s massive war chest.

Biss, meanwhile, has championed himself as the middle-class candidate and made it a cornerstone of his platform. While he does not have the campaign dollars that Pritzker or Kennedy enjoy, he has nonetheless managed to raise more individual campaign donations of $100 or less than any other candidate. Biss has continued to hammer home the fact that he is the only candidate with real legislative experience.

Kennedy, son of the late Robert F. Kennedy and nephew of President John F. Kennedy, is likely counting on name recognition come election day. The Kennedy family has a long history of social activism, particularly with the African-American community. Kennedy has made gun violence the foundation of his platform and has chosen Ra Joy as his running mate, who is a vocal activist for curbing gun violence in Chicago.

It took less than five minutes on Thursday before candidates began to attack one another. Asked about job creation, Pritzker said, “I’m the only candidate that has actually created jobs,” to which Kennedy immediately said that if there was an award for job creation it should go to himself.

“What jobs did you create?” he asked Pritzker.

The question of the night came when the moderators asked the candidates how much things cost to determine if they were relatable to the average voter.

Both candidates took a bit of heat on social media and at the press conference for their answers. Biss posted on Twitter a picture of him holding up his Metra card saying, “…boy did I miss that one!” Pritzker defended his answer saying that there is a full spectrum when it comes to childcare.

Asked for the price of a haircut, Kennedy received perhaps the easiest question.

Extending a small olive branch, Kennedy defended his fellow candidates after the forum, calling the line of questioning a “bit of a gotcha moment.”

Each of the candidates were asked stylized questions specific to concerns that voters may have about them.

“I believe my actions speak for themselves,” Pritzker said.

Chris Kennedy was asked if he had the temperament to be governor. Kennedy has snapped at a reporter who chased him down in an elevator. He also walked off stage at an earlier forum when asked a question that, he felt, was insensitive.

“I think I have developed as a candidate,” he said. “I’m a peacemaker.”

Biss was asked about a 2013 piece of pension legislation that ended up being ruled unconstitutional. The topic has been a sore spot and a thorn in Biss’ side for much of the race.

“I’ve acknowledged that was a false choice,” he said. “Nobody on this stage will be a perfect governor in 2019.”

Although Pritzker, Kennedy and Biss have garnered the most attention due to polling numbers and campaign dollars, Bob Daiber and Tio Hardiman insist they are serious contenders to win the primary election.

Daiber is an educator and politician from downstate Illinois and believes that he will secure the voters outside of Chicago.

Hardiman is a community activist and former director of CeaseFire Illinois, a Chicago based anti-violence program.

“Those three men are not the only candidates running for governor,” Hardiman said while interrupting the moderators on Thursday.

At the press conference following the forum, Hardiman reminded the press that the last time he ran for election he was polling at only 5 percent, but he managed to secure 28.1 percent of the vote in the 2014 primary election.

Robert Marshall is a physician from Burr Ridge who was late to enter the race. Marshall has a radical idea to divide Illinois into three separate states. Although all the candidates favor legalizing cannabis, Marshal has additionally called for the legalization of cocaine and morphine in order to help “take the money out of the drug trade.”

With only two weeks until the March 20 primary election, don’t expect the candidates to let up on personal attacks or negative ads. The general consensus among political experts is that while Pritzker may have a decent-sized lead, Kennedy and Biss are well within striking distance. In other words, it’s still anybody’s race.