Review: A Stinker in Time 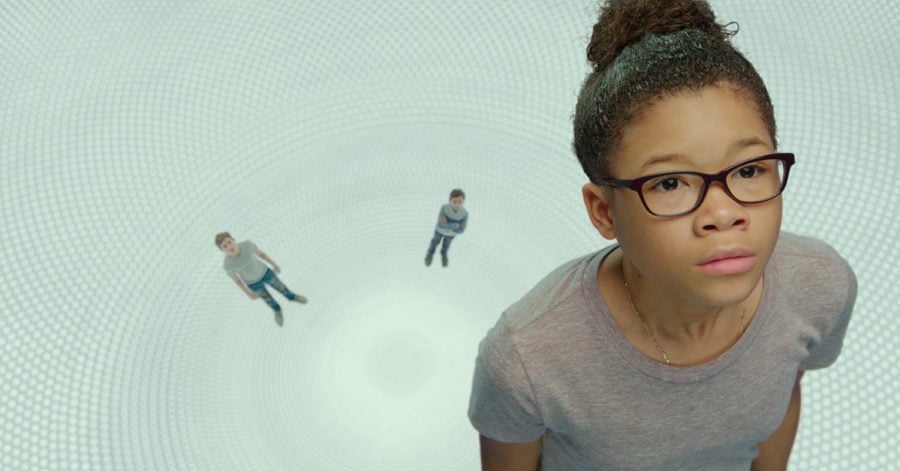 Storm Reid stars in the on-screen adaption of the beloved novel "A Wrinkle in Time." (Photo courtesy of IMDB)

After hitting a homerun with the critically acclaimed “Selma” back in 2014, Ava DuVernay landed the coveted spot as director on a big budget Disney project. That project was “A Wrinkle in Time,” based on the popular children’s fantasy novel by Madeleine L’Engle, that tells the tale of young Meg Murry as she journeys across the universe to find her father who disappeared four years ago. She brings her intellectual six-year-old brother and a friend named Calvin along with her, using the power of “tessering” to slip between wrinkles in the fabric of time and travel great distances.

They are assisted on this journey by three powerful guides, Mrs. Which, Mrs. Whatsit and Mrs. Who. They help the kids on their quest to find Mr. Murry, fight the darkness and bring peace to the universe. This film swings for the fences but sometimes when you swing big you miss big. Such is the case with “A Wrinkle in Time.”

The film’s characters are a major problem, which is a shame because the film has so many big names attached to it. The guides are all notable actresses who feel wasted because they hardly show up in the film and disappear from the third act completely.

Oprah Winfrey plays Mrs. Which, who is the powerful guardian. Surprisingly though, she doesn’t come across as very powerful. The lines are not particularly uplifting or inspiring and Winfrey doesn’t give them as much oomph as one might hope based on who she is. The film settles for just making her bigger than the other guides the first few times they appear, shouting out how she is the “powerful one,” rather than showing her power. She doesn’t get much depth in her brief time either, only chiming in to repeatedly explain how Meg needs to believe in herself.

Mindy Kaling gets the shortest end of the stick, as she is hardly in the film as Mrs. Who, and barely talks when she is. Her quirk is that she speaks in quotes. Except when she doesn’t. Her character feels completely pointless to the plot and is entirely uninteresting.

Reese Witherspoon as the infinitely happy Mrs. Whatsit is the biggest standout of the three, who uncoincidentally also has the most screen time. We get a brief glimpse into what her life might be outside of helping these kids, which instantly makes her deeper than the other two.

It’s always difficult critiquing younger actors because they are just kids, but outside of Meg (Storm Reid) it isn’t pretty. Deric McCabe as the young Charles Wallace is okay during most of the film, though the character himself is quite annoying. He is one of those that knows all the answers, but never divulges them because then the plot would lose intrigue; often spouting phrases like, “you’re not ready to know yet” or “now isn’t the time.” In the final act of the film, however, the character makes a drastic turn and things become much harder to buy into.

Finally, Calvin is another character who just does not need to exist. He feels like a shoehorned in “romantic” interest for Meg, who never comes within 100 miles of effecting the plot.  Thank goodness he can chime in every 20 minutes to monotony remind Meg how great her hair looks though.

Storm Reid does do a fine job as Meg. As the main character she is naturally the most developed character and is a tad interesting. She stands out most when establishing the close relationship she had with her father (Chris Pine, another wasted name) in the only genuine bond in the film.

Now, yes, I’m a college student who is not the target audience for this film and as much as I may sometimes wish to be six again, it won’t happen. Some of what is mentioned may never occur to the children watching the movie, but the problem is it’s not effective with things kids will notice either.

A wonderful way to bring in kids is with funky visuals and when you can go anywhere in the universe, that should be easy, in theory. The first planet they visit is an incredibly beautiful meadow where the flowers come alive and communicate through color. Perhaps the most visually intriguing is when Mrs. Whatsit transforms into a giant flying leaf and takes the kids on a ride.

Yes, that happened and no there is no explanation. As soon as they leave a planet, nothing that happened there will be mentioned for the remainder of the film making each world feel disconnected.

The visuals on the remaining worlds are all drab and ordinary.  A crowded beach, a gray cave, and giant black space. Real attention grabbers.

Another sure-fire way to grab the kids’ attention is with catchy pop music. This is thrown into the film in the most haphazard way, never matching the mood and taking the audience out of the film completely. Additionally, it feels like there are references that kids won’t get. Will they get how powerful a personality Oprah has? Will they recognize Zach Galifianakis (who is hilarious here) in his two minutes?  The most recognizable child star is Rowan Blanchard from “Girl Meets World” and she is in the movie for less than a minute.

At the very least, the children are the heroes and the film delivers a good message, so as a child’s film it has that going for it, but not much else. Uninteresting characters, moments of clumsy dialogue, poor visuals (and poor effects at times), it goes on and on.  At least it’s relatively short and the few good moments come up just enough to pull you through, but this “Wrinkle” is a stinker.